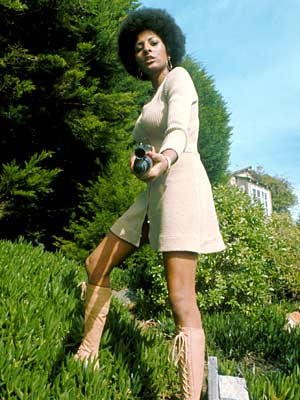 The awesome Pam Grier in her career-defining role.

One of the many things that fascinates about the blaxploitation boom was its willingness to feature strong females as protagonists and there are several films in the genre that stand out for their estrogen-fueled festivals of carnage, but none is as deservedly iconic as writer/director Jack Hill's COFFY, the film that more than any other enshrined Pam Grier as the poster girl for the era. If you were wondering what the best-ever tough black chick movie was, look no further. As a matter of fact, COFFY easily makes it into the Top 5 Tough Chick Flicks of All Time list, so make of that what you will.

The film stars the stunning Ms. Grier as the title character, an inner-city nurse whose little sister is hospitalized after a near-fatal dose of pure heroin, thus spurring our heroine to launch a vicious one-woman war on the mobsters and drug-dealing pimps responsible. That's all you really need to know, but the film is liberally flavored with foul language, nudity, pimpalicious outfits, fistfights with bulldykes, a badassed catfight involving a roomful of whores and our heroine's utility razor-filled wig (Yowch!!!), and a shockingly memorable point blank sawed-off shotgun blast to the head during the first five minutes. 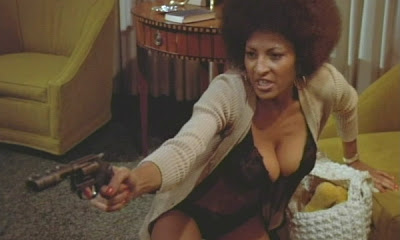 Pam Grier as Coffy: "She'll cream you!"
All of this fronted by Grier in her prime and written/helmed by the genius behind THE BIG DOLL HOUSE (1971), FOXY BROWN (1974), the incredible SWITCHBLADE SISTERS (1975) and the equally insane bargain basement barbarian flick SORCERESS (1982), so how could you not want to see this? I won't add anything else, other than to say that COFFY is one of the genuine classics of the blaxploitation wave and a film that simply screams "Seventies," so do yourself the favor and rent it immediately. HIGHEST RECOMMENDATION. 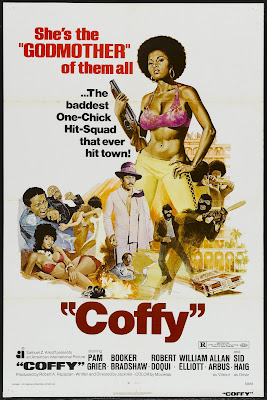