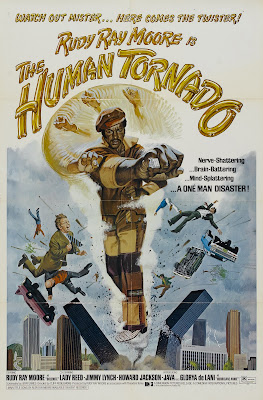 "He think he's bad and ain't got no class! I'm gon' rock this shotgun up his muthafuckin' ass!"
-Dolemite (Rudy Ray Moore), expressing his annoyance at a pursuing redneck sheriff.

1975's DOLEMITE has gone down in the annals of the blaxploitation genre as something of an ultra-profane classic starring "the father of rap," Rudy Ray Moore, a reputation that has grown since the home video boom of the 1980's and the film's subsequent rescue from celluloid obscurity when it was resurrected on VHS. I first heard of it when I saw its instantly memorable trailer as part of THE BEST OF SEX AND VIOLENCE (1981) and was positively gobsmacked by what appeared to be (and actually was) a film showcasing a character who merrily personified every "bad nigger" stereotype in the book, all in the name of the most lowbrow of laughs. Amateurishly made, agonizingly-paced to the point of occasional boredom and featuring wall-to-wall bad fashion statements endemic to the era, DOLEMITE is in my opinion a cult movie totally undeserving of its lofty trash reputation. Yes, it has moments that are fleetingly amusing, but overall it's just a very, very bad movie and that's all there is to it. But somehow it must have made enough at the box office to warrant a sequel and thank the gods that it did, because THE HUMAN TORNADO is everything you've been led to believe about DOLEMITE, and then some. 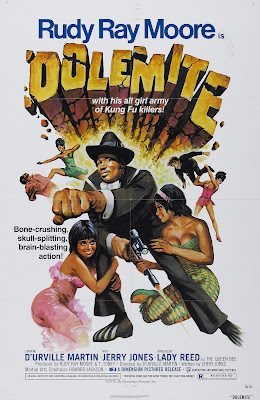 Theatrical poster for the DOLEMITE (1975).
For those who (luckily) missed DOLEMITE, here's what you need to know: Dolemite (Rudy Ray Moore) is the ultimate American black dude. He can out-fight, out-rhyme, out-smart and out-fuck any man alive, and he can even look totally cool while wearing outfits that would make Liberace shout "Damn!" and put on shades to avoid the glare. No woman can resist his manly (if rather flabby and not particularly good-looking) charms, and they either instantly hop into bed with him or become one of his loyal interracial "all-girl army" of kung fu-fighting prostitutes. When not battling low-level street crime or looking for revenge on assorted miscreants, Dolemite can be found hanging out on street corners, regaling passersby with lengthy and profane rhymes like the classic "Shine and the Titanic" and coming up with new and infinitely creative ways of cursing people out, a particular favorite being the epithet "You born-insecure, rat soup-eatin' motherfucker." But that's DOLEMITE. We're here to talk about THE HUMAN TORNADO!

When THE HUMAN TORNADO opens, it begins with an outlandish series of shots featuring Rudy Ray Moore in a number of cornea-wilting Seventies outfits that range from the African-inspired to the pimpilicious, interspersed with shirtless demonstrations of his feeble and out-of-shape karate prowess as the credits roll by. Then we're abruptly dropped into a filmed record of one of Rudy Ray Moore's live standup comedy performances in some chitlin-circuit joint, and the shit's pretty damned dire (although his observation about how a brutha in the audience with really big lips looks like his face is wearing a turtleneck sweater gains points for originality). This example of the kind of humor once found in the "party record" genre may be of interest to those who know little or nothing of those bygone days of "blue" vinyl, but for anyone else it's a five-minute endurance test and it would be understandable if the average viewer turned off the film before this segment comes to a welcome end, but trust me when I advise you to stick with it.

Once that "comedy" mess is over, the film proper starts and we're taken to a house somewhere in rural Alabama where Dolemite and a bunch of his friends are having a party. It's in broad daylight and the guests — all black — have spilled out onto the lawn, at which point an exaggerated pair of mother and son rednecks drive by and observe the reveling Negroes, prompting one of my all-time favorite bits of dialogue in any film from any genre: 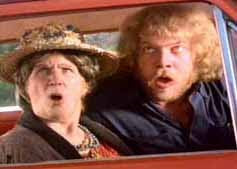 Momma and Jethro: outraged rednecks.
Momma: Lookee yonder somethin's a-going on at that big house! Jethro: Of course somethin's going on up there. Them people's havin' a party. Momma: Goddamn it, Jethro! Them ain't people! Them's niggers!!! Jethro: By God, Momma, yer right! They gotta be niggers, 'cause it ain't Halloween!

As of that moment, I snorted the beer that I was drinking through my nostrils and knew I was bearing witness to a classic.

The outraged rednecks leave and alert the authorities to the goings-on at Dolemite's house and the police hightail it to the scene. While this is going on, Dolemite addresses his guests and receives kudos for his civic-minded contribution to the local church, after which he grouchily retires to a back room where he services a sex-starved white woman for money, revealing himself to be a whore as well as a pimp. 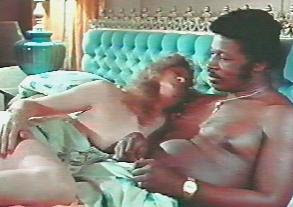 Actual dialogue: "Dolemite, you're worth every cent I pay you!"

When the cops arrive, they cackle like the pair cartoon crackers that they are and harass the partygoers at gunpoint, with the sheriff (J.B. Baron, turning in a performance that must be seen to be believed) making his way toward a back room with the intent to rape one of the female guests. 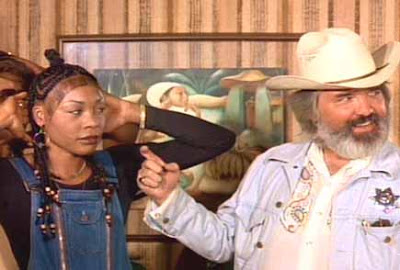 The incredible J.B. Baron as Sheriff Beatty (and not Kenny Rogers on crystal meth).

When the shotgun-toting deputy and the sheriff stumble into the room where Dolemite is whoring himself out, the stunned whiteys discover that Dolemite's all-too-willing (and paying, let us not forget) bedmate is the sheriff's own wife. 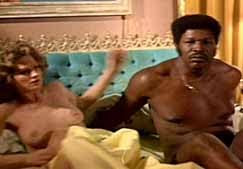 Caught in the act.
Clearly busted, the woman thinks quickly, looks from her husband to Dolemite and exclaims "He made me do it!" An appalled Dolemite reacts with the deathless "Bitch, are you for real?!!?"and with that the sheriff orders his deputy to shoot the adulteress, which he unhesitatingly does. Dolemite uses the confusion to grab a pistol, shoot the deputy and flee, bare-ass nekkid, escaping down a hill to the waiting car of his friends. This madness is compounded by the astounding sight of nude and doughy Rudy Ray Moore diving down the hill only to have the film suddenly freeze as Moore's voice bellows "So, y'all don't believe I jumped, huh? Well, check out this good shit!" at which point the film runs backward and the words "INSTANT REPLAY" flash onscreen as we are once again treated to the sight of the flying nude Dolemite. 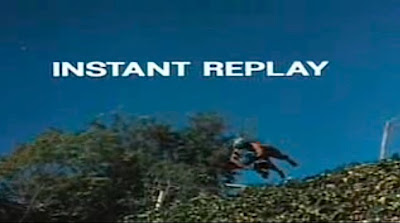 A jaw-dropping moment of sheer "what-the-fuck-ness."
Dolemite and his boys (including a pre-GHOSTBUSTERS and bald Ernie Hudson) flee the obsessed sheriff — who has conveniently pinned the murder of his wife on Dolemite — and make their way to California, where they discover that Queen Bee (Lady Reed, playing the same character as in the previous film) and her stable of whores are getting violently pressured by Mafia scumbag Cavaletti (Herb Graham) to work for him, or else. With no one to defend the ladies (they've apparently forgotten they're martial arts badasses) and two of their number kidnapped and subjected to horrible (read "ridiculous") tortures by a madwoman who likes not unlike an LSD-infused version of Witchiepoo from H.R. PUFNSTUF, Dolemite comes to the rescue in a flurry of horrendously-choreographed martial arts action, bad rhymes and outrageous affronts to the art of film-editing.

As you may have gathered, THE HUMAN TORNADO is a very, very bad movie by most people's standards, but, unlike its predecessor, it's entertaining as hell and is as politically incorrectly hilarious as BLAZING SADDLES (only minus the Mel Brooks classic's utter mess of an ending). Its merits are hard to describe and I would say it's simply something that must be experienced to be understood and appreciated, but among the film's highlights that were not previously described can be found: 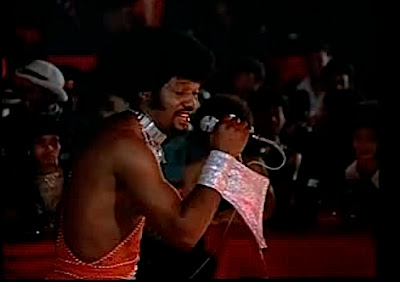 The outfit makes not a lick of sense and I love it.And lastly, but definitely not least, this film must hold some sort of record for usage of the term "motherfucker." It's heard nearly every time Dolemite opens his mouth and if one were to play a drinking game in which participants imbibed whenever "motherfucker" is uttered, the local emergency room would soon be filled with individuals on the verge of death by alcohol poisoning.

Lower-than-lowbrow though it may be, THE HUMAN TORNADO is a bona fide pisser and should be seen by everyone with even the slightest interest in the excesses of the blaxploitation genre. A triumph of bad moviemaking, it's one of my all-time favorite movies and would definitely make tghe cut if I had to eliminate all but ten films from my permanent collection. I know that may sound completely insane, but much like SORCERESS, it transcends its own awfulness and becomes a thing of eternal joy. HIGHEST RECOMMENDATION.
Posted by Bunche (pop culture ronin) at Tuesday, February 02, 2010

A movie that should have had its own action figure lineup.

Did you watch a VHS or a DVD? I've heard that the DVD is missing the gay/car-jacking sequence...

I've seen it on VHS and DVD and the version of the DVD that I have does include the car-jacking. Maybe there's a newer edition that excises it but I have heard nothing about that.