THE CREATIVE MIND OF MICHAEL FROM LANCASTER

Back in the days, there were a number of fans who regularly sent in ideas and proposals to Marvel Comics and there were a special handful whose letters were eagerly awaited by the staff. One such writer was Michael (last name withheld) from Lancaster, NY, who would often send in character concepts of dubious quality, ending each letter with his contact info in case Marvel was blown away by his ideas and couldn't wait to hire him as a writer. Most of his pitches were run-of-the-mill stuff, but the two that you are about to read are oustanding examples of marvel not knowing a pair of sure-fire hits when they were staring them in the face (double-click on them to see them large). First up is "Petey, King of Drugs": 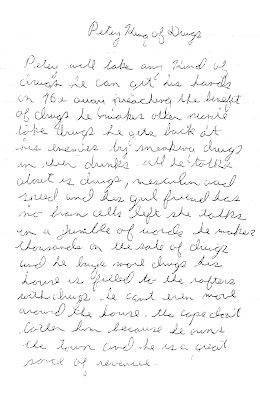 And as if that weren't "edgy" enough for you, check out one of my all-time favorite pitches, the jaw-dropping "Augie": 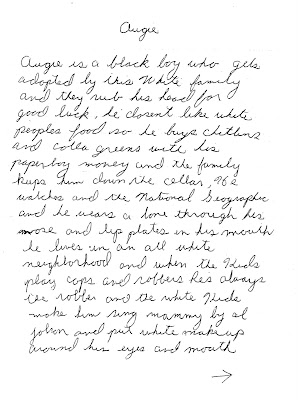 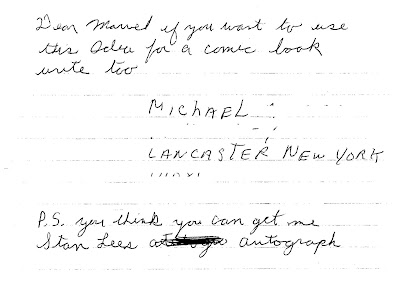 I don't know about you, but I would have read both of those comics in a heartbeat if they were ever greenlighted.
Posted by Bunche (pop culture ronin) at Sunday, February 21, 2010

*blinks at both, especially "Augie"*

Well, this certainly explains a lot about... um, a lot.

(Love the badly hand-written letters. We once got someone who submitted a proposal to White Wolf written in colored crayon. Not even ink - crayon.)

Feh! Michael from Lancaster falls before the awesome might of...

I'm sure he got on the executive track somewhere.

I think you showed me Augie once.

Augie had me cracking up. I would have loved to see the crossover epic between Augie and the King of Drugs.