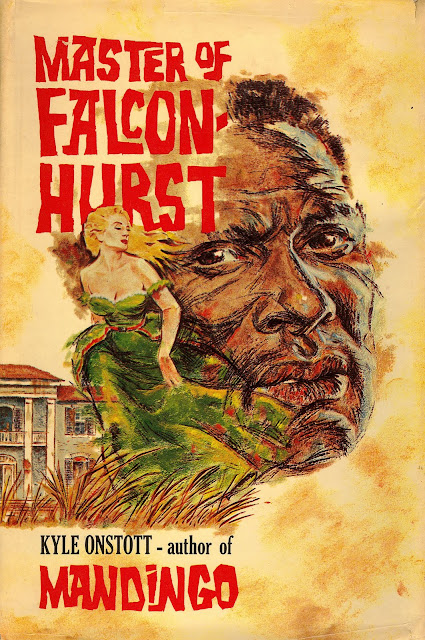 Dustjacket for the 1964 hardcover first edition.


And so, Black History Month comes to a close, but not before I review the last book in Kyle Onstott's infamous Falconhurst trilogy. This was the final book in the series featuring the direct involvement of its creator before he died, at which point the Falconhurst saga continued (and degenerated) in the hands of sleaze-master supreme Lance Horner.

MASTER OF FALCONHURST follows the journey of Drummage — short for "Drum Major" — the son of the previous book's tragically murdered Drumson, from slave to the literal master of Falconhurst, the slave-breeding plantation where the majority of the action in MANDINGO and DRUM took place. Upon hitting roughly the age of sixteen, Drummage ends up as a house slave to Hammond Maxwell and Miss Augusta, both some seventeen years older than when last seen (at the end of DRUM). After being whipped for an infraction that he did not commit, Drummage is given the house nigger position by Hammond as an unspoken token of apology for disbelieving Drummage's insistence of innocence and from there he becomes the number two power among Falconhurst's blacks, second only to the iron hand of takin'-no-mess uber-mammy Lucrecia Borgia. This position allows him unlimited access to the slave girls and in no time Drummage has fathered a small army of offspring. Much of the novel involves the same kind of shenanigans as seen in the previous books, though thankfully free of the "fightin' nigger" subplot that would have made this book quite a repetition of previously-explored narrative luridness, and we also get the return of Hammond's nymphomaniacal, jungle-fever-havin' daughter, Sophie (actually fathered by Hammond's second wife Blanche's "gotch-eyed" brother, Charles), roughly in her early-twenties, fat, facially unappealing and returned from her studies at a finishing school for young ladies, an institute for higher learning that did little to render her any more classy than the spoiled and monied white trash that always was. Once back home, Sophie proceeds to secretly fuck as many of the male slaves as she can coerce during her daily carriage rides to secluded wooded areas and she of course sets her sights on Drummage, who has the good sense to avoid her. A lot of the usual sleazery takes place, holding the reader's interest as the Civil War breaks out and Hammond leaves Falconhurst to fight for the south and finance the troops. While Hammond is gone, the task of making sure Falconhurst runs smoothly falls to Augusta, Lucrecia Borgia, Drummage and a handful of trustworthy slaves who are too ensconced in the slave mentality to even dream of wanting their freedom. As the war drags on and the once-proud plantations surrounding Falconhurst fall into financial ruin, Falconhurst thrives due to its self-sufficient nature (it grows nothing but slaves and the food to sustain said slaves and, by default, its white residents) but with Hammond absent, discipline becomes lax and the slaves, led by Drummage and the aging Lucrecia Borgia, basically run everything.

When news of Hammond taking ill in battle reaches Falconhurst, Augusta rushes to be with him and both succumb to disease, thus leaving the plantation and family wealth of buried treasure (that only Drummage knows the location of) to Sophie, who marries a near-white freed slave/con man who takes her for all he can, but not before getting shot by one of Sophie's trysting-slaves, leaving her distraught. Since she never had much use for white folks in the first place (she declares herself "more nigger 'n white anyway"), Sophie now openly gets her hump on with any black men available, and with the shift in power so blatantly in favor of Drummage, Sophie regularly pays Drummage in cash and valuable jewelry for his servcies. There is no real love between the two, just a business transaction, because Drummage enjoys giving his dead master's spoiled bitch of a daughter no choice but to buy him. When the war ends and the south loses, the slaves are now free, but since they have nowhere to go, the majority of them stay on at Falconhurst and little changes, except for the inevitable death of Lucrecia Borgia and Drummage aspiring to a social position equal to whites. The first step in his plan is to marry up with Sophie (now heavy with his child), a step quite controversial at home, but downright inflammatory to the whites in surrounding towns, but marry they do, and Drummage takes the Maxwell name as his own, shortly after which Sophie dies while giving birth to their virtually white son, Drummond. Having learned to read and write some years earlier, armed with tons of cash and now being tutored in the ways of white comportment by a Union officer whom he befriends, Drummage becomes every bit as arrogant and douchey as his white former-oppressors, merrily supplying powerful northern visitors with black women to sleep with and financing Union groups that seek to empower the now free black population of the south. Drummage even joins the Union group and prepares for a run for Congress, all while making time with the incredibly avaricious Candy, a light-skinned former-Falconhurst slave who was in cahoots with the con man Sophie had married (and the con man's darker brother), but escaped to New Orleans with part of the Falconhurst treasure. But while blinded to reality by his money and power, Drummage neglects to notice the growing resentment of his now poor white neighbors, a deadly hatred that comes to a head as some redneck members of the newly-formed Ku Klux Klan gang-rape Candy literally to death and then crucify Drummage. Just as he's about to have his considerable manhood removed with a Bowie knife, one of his attackers finds himself disgusted by the wanton lust and bloodthirst of his compatriots and opts to grant Drummage an easier death, shooting and killing him. Drummage's son is left to be raised by the aforementioned Union soldier friend, Chris, and the whole mess is summed up by Big Pearl, a supporting character from the previous novels and Drummage's mother, who reminisces about the trilogy's horrifying events.

MASTER OF FALCONHURST is a compelling read and almost as good as DRUM, but if not for the inclusion of the Civil War and its aftermath, it would have been a case of just more of the same, only better-written than MANDINGO. Once again, an Onstott novel gives props to Lance Horner for his assistance and, as I've said before, I believe the novel is a case of Onstott doing the main writing and leaving the tightening of it to Horner. While MANDINGO was unquestionably lurid as hell, it was not outright designed as a showcase for prurience; Onstott clearly intended to bring the horror and inequities of chattel slavery straight to the faces of his white readers and force them to take a deep, bloody-splattered, shitty whiff of it in all its awfulness, pulling no punches in its raw depiction of graphic (for its time) sex, violence and unbridled dehumanizing cruelty. When Horner entered the picture in earnest (with the by-then-deceased Onstott still being credited), the writing took a quantum leap in quality, but the visceral/sexual content became a source of titillation for those who get off on borderline sado-masochiostic pornography, thus reducing Onstott's intent to fodder for the kind of sleazy novels that once lined the racks in airport and bus station bookstores. After MASTER OF FALCONHURST, the Falconhurst saga continued on for at least a decade, but I can't be certain of exactly how long it went on because there's surprisingly little information about this stuff to be found on the Internet. I can think of at least six or seven sequels off the top of my head and I'm certain there are even more than that, but out of the followups that I've read, only one of them is worth reading as anything other than a mere time-killing potboiler. Easily my favorite of the entire Falconhurst genre, FALCONHURST FANCY (1966) takes place about ten years prior to the events in MANDIGINO and does not focus on Falconhurst at all (although it does include brief cameos from a tweener Hammond Maxwell and his father), instead giving the spotlight to Dovie Verder of the Cote plantation, a rare and well-written female protagonist for this sort of thing, and Colt, the Nubian Adonis who is the object of her forbidden desire. 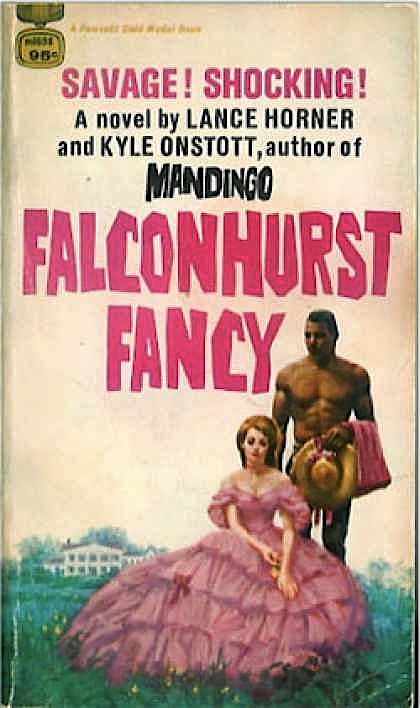 The immediate followup to MASTER OF FALCONHURST, it's a damned fun piece of exploitation quasi-literature and I intend to read it again as soon as possible so I can provide a detailed analysis.

The direct sequel to MASTER OF FALCONHURST (in narrative terms) is HEIR TO FALCONHURST (1968), which skips the story ahead to chronicle the grown and white-looking Drummond and his adventures in the post-Civil war south. I bought as many of the Falconhurst books as I could find on eBay some years ago and I confess to not having read all of them, but this one has my interest thanks to me having just finished re-reading its immediate narrative predecessor just two days ago. 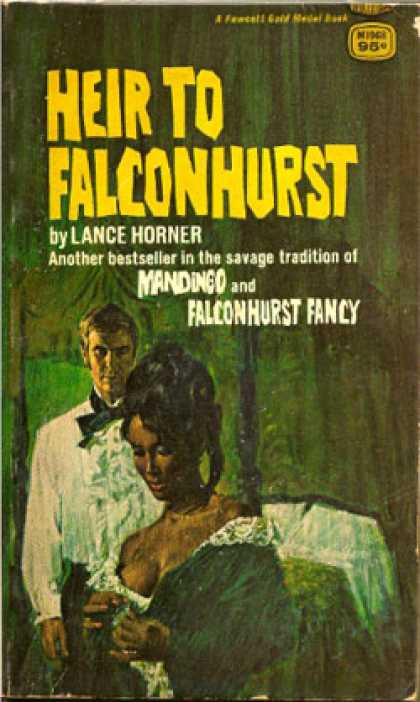 I'll read HEIR TO FALCONHURST before re-discovering the lurid joys of FALCONHURST FANCY, but don't expect a post on it in the immediate future.
Posted by Bunche (pop culture ronin) at Sunday, February 28, 2010

Labels: IT'S BLACK HISTORY MONTH, WHAT I DONE BEEN READIN'