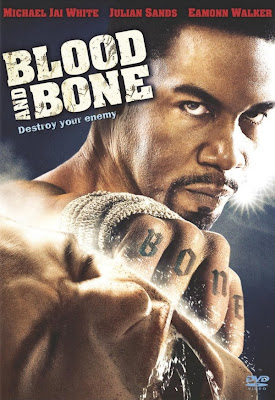 "I am the punishment of God...If you had not committed great sins, God would not have sent a punishment like me upon you."
-Genghis Khan, quoted by this film's hero to the piece's villain, who completely misses its relevance in the story's context.

Martial arts movies involving illegal underground street fighting are certainly nothing new, and the number of them that are actually worth sitting through can be counted on one hand. Coming from out of nowhere, BLOOD AND BONE can be added to the short list of worthwhile underground fighting flicks and after watching it I would very much like to know why it was released straight to DVD with no theatrical run. If NEVER BACK DOWN — a film that can best be summed up as "FIGHT CLUB meets THE O.C." — made it to the big screen, the BLOOD AND BONE should certainly have been given the same consideration, and I bet it would have been a hit. 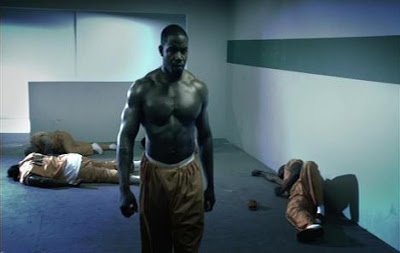 Bone (Michael Jai White), moments after proving beyond the shadow of a doubt that he's the baddest motherfucker to come along since Bruce Lee and Sonny Chiba (an assessment I do not make lightly). And this is before the main titles!

Mysterious ex-con Bone (Michael Jai White, looking like the black analog of Richard Corben's Den)arrives in L.A. — in a shot more than slightly reminiscent of David Carradine as Kwai Chang Caine stoically coming in from the desert to right wrongs — and sets up residence in a boarding house run by a kindly woman (Nona Gaye, daughter of Marvin) who cares for a number of parentless children. Immediately establishing his borderline-superhuman ass-kicking skills in a prison sequence during the films first three minutes, Bone insinuates himself into the area's underground fighting circuit and falls in with loudmouthed manager/emcee Pinball (Dante Basco, who you may remember from HOOK, THE PERFECT WEAPON and that horrendous live-action FIST OF THE NORTH STAR, here turning in a great performance for what is essentially a stock role in this genre), and in no time his "take 'em out with one technique" excellence catches the eye of James (Eamonn Walker, best known as Kareem Said on OZ), a psychotic pimp and underground fight manager with his eyes on something bigger than the relatively paltry take found running what are essentially human cockfights. 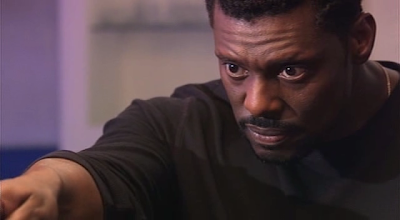 Eamonn Walker as James: one crazy, evil motherfucker.
Also, Bone's considerable masculine beauty does not escape the notice of of James' hot-but-strung-out on-heroin girlfriend, Angela (Michelle Belegrin), and things escalate from there, but not necessarily in ways viewers will expect. Julian Sands is also on hand as an uber-wealthy and powerful arms dealer whose involvement with an international group called The Consortium could allow James an in into the highly lucrative world of international underground fighting, and Sands' bad guy is given what is perhaps the most eloquently stated and totally honest speech ever given by a white villain regarding his (and his associates') true opinion of black people. 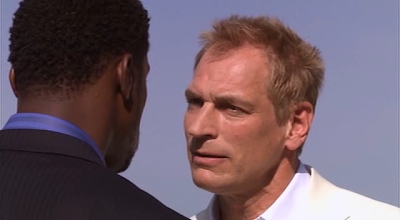 Anyway, there's a hell of a lot more going on here than just your run-of-the-mill fight flick, and the plot's mysteries unfold to provide both a satisfying conclusion and hopefully the start of a Bone franchise.

What got me interested in seeing this movie was the trailer included on the DVD of BLACK DYNAMITE, and that brief taste was enough for me to order the flick sight unseen, and I'm very pleased with what I got. I expected nothing more than a movie filled with well-choreographed fights, which I certainly got, but what I did not expect was a decent plot and solid performances by all involved. There's mystery surrounding the protagonist until about halfway through the proceedings and there's more emotional depth to what's up with him than the typical rote "you killed my brother" plot, so that's a plus. 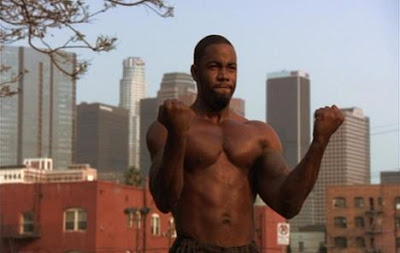 Bone engages in his morning warmup.
Michael Jai White communicates volumes with his face and body language as the largely quiet Bone, a man who does not waste anyone's time with unnecessary verbiage, instead getting his point across with action, and brother, what action it is! White holds certifications in Shotokan, Tae Kwon Do, Kobudo, Goju Ryu, Tang Soo Do, Wushu and Kyokushin, so unless you have a sniper rifle and are aiming at him from about a block away, it's a good bet that the guy will fuck your shit up. His skills were evident and impressive in his previous action roles, but BLOOOD AND BONE really allows White to showcase his impeccable technique and awesome physicality in a way not seen since Bruce Lee, Sonny Chiba and other martial arts titans of yore, and his talents are pitted against a slew of MMA fighters who, like White, execute their moves without a even a hint of the wirework and jump-cutting that renders the majority of contemporary martial arts flicks unwatchable and boring bullshit. These fighters are the real deal, Jack, and give every combat sequence their all. But it's White who electrifies as a living battle computer with a keen analytical mind and the talent to execute the complex and devastating techniques seen here. Simply put, I was completely blown away. MMA badassed hotness Gina Carano. Sing along with me, kiddies: "Here I am, in love again..."

And of note to martial arts buffs: the film contains an appearance by Gina Carano, the hottest MMA champion ever, and a now-ancient Bob Wall as a character named "Oharra," who probably isn't the character he played in ENTER THE DRAGON because that asshole was quite decisively killed by a righteous Bruce Lee, and I don't think I have to state that when Bruce Lee kills a motherfucker, said motherfuckers stays dead. 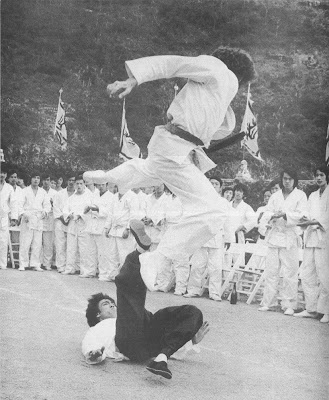 Bob Wall in ENTER THE DRAGON (1973), on the receiving end of cinema history's harshest kick in the nuts.

The film is also given extra credit for a sequence that forever ruins Wang Chung's annoying Eighties pop hit "Dance Hall Days," which in my book counts as a public service.

So I heartily recommend BLOOD AND BONE to any and all who enjoy this kind of thing. Definitely a latter-day blaxploitation film, and a damned good one at that, this flick comes HIGHLY RECOMMENDED.

And lastly, how can you not love a martial arts movie containing a badass known as "the homicidal homosexual, Mommie Dearest?" 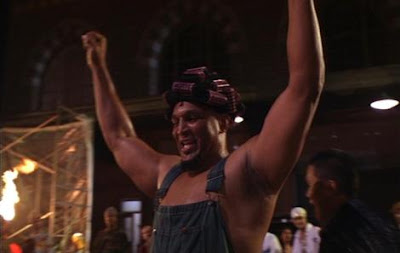 underground street fighting has to be one of the most manliest movie categories. It's like BEACHES for guys. Your not a real man if you don't like at least one fight movie.

Thanks for the heads-up! Michael Jai was the only feature of that wretched Spawn movie, and it's good to hear about a vehicle for his undeniable talent and charisma.

(Where's the love for Tony Jaa, though?)