PERCY JACKSON AND THE OLYMPIANS: THE LIGHTNING THIEF (2010) 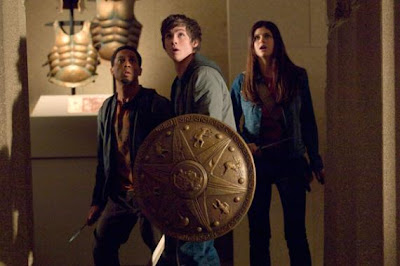 Now these are what I call heroes: (L-R) Grover, Percy and Annabeth.
With the success of Harry Potter, it was inevitable that more family-friendly fantasy series would come into being and several have come and gone, but Rick Riordan's Percy Jackson books have won acclaim from critics and readers, and now the first film adaptation has hit. I'll cut straight to the chase and tell you that I went into PERCY JACKSON AND THE OLYMPIANS: THE LIGHTNING THIEF having never read the books, but after what I got when I saw the movie, you can bet your sweet ass that I'll be reading them as soon as possible.

As anyone who's ever read Greek mythology can tell you, the Greek gods were a randy lot who spent a lot of time lusting after and seducing mortal women (or, more honestly, raping them, if you read the less-family-friendly recountings of the stories), and the fruits of those unions often became great heroes who slew horrifying monsters. That was back in the days of yore, but now it's the 2000's and the gods are still up to their priapic ways. Young Percy Jackson (the very good Logan Lerman) discovers the hard way that he is the result of his mother's passionate relationship with Poseidon, god of the oceans, and in no time his mundane world of high school angst gives way to potentially deadly confrontations with deities and monsters straight out of Edith Hamilton. Y'see, Percy unwittingly finds himself the chief suspect in the theft of Zeus' thunderbolt, and if it is not returned within a certain period of time, the "Big Three" of the Olympian pantheon, specifically Zeus, Poseidon and Hades, will go to war for supremacy, a conflict that would lay waste to most of the world. So it's a race against time for poor Percy, who must save his mom, the world and his own ass, all while discovering the awesome details and perks of his hitherto unknown birthright. Luckily for him, he's far from the only mythic being or demi-god to be found in the Tri-State area, and aided by his best friend, the "handicapped" Grover (Brandon T. Jackson), and the beautiful and highly-skilled warrior Annabeth (Alexandra Daddario, certain to become a hero to little girls everywhere), Percy embarks on a quest to plead his innocence to the lord of the Underworld and free his kidnapped mother in the process. The way is fraught with danger (that may be a tad too scary for the under-eights) and loaded to the gills with monsters and situations that are sure to delight the mythology-cognisant, all of which adds up to give the audience a rousing, compelling equivalent to a modern day Ray Harryhausen film, and that's a compliment that I do not hand out lightly. It hits all the right mythic notes and that just makes me feel good all over. And how can you not love Uma Thurman as Medusa? I mean, seriously that rocks!

If looks could kill: Uma Thurman as Medusa.
To be blunt: I fucking loved every second of PERCY JACKSON AND THE OLYMPIANS: THE LIGHTNING THIEF and intend to see it again as soon as possible. Oh, and don't walk out when the end credits start to roll...
Posted by Bunche (pop culture ronin) at Monday, February 15, 2010

We saw the preview during Avatar, and were both really hoping the movie wouldn't suck. On your endorsement (which, BTW, means more these days than any other reviewer's opinion), we'll probably go see it today or tomorrow.

(I admit I'm curious how the original author of the Percy Jackson books avoided getting sued by White Wolf, as the plot of the series is lifted straight from their game Scion. Still, I'm happy to see more worthy and successful entries in the current fantasy wave. I keep worrying that the suckier entries will kill that wave; so far, though, it not yet happened.)

I loved *almost* every second of the movie, which is notable considering that I expected it to suck hind tit. I've described it to friends as not being "OH MY GOD THAT WAS F&#%ING AMAZING!!!!" but that it was fun and worth seeing.

There were some things that irritated me though. One is the appearance of mythological beings that should have been dead. Unlike what is described in such tomes as the Dungeons and Dragons Monster Manual, there's no such thing as "A medusa." She's Medusa, as in: that's her name. And she died under Perseus' blade.

And that hydra thing. There was only one of those, too - and Hercules killed it.

And then they completely missed the critter that was supposed to still be alive: the three-headed dog Cerberus that guards the underworld...though admittedly that fearsome creature's absence could be explained by it having been abducted by J.K. Rowling, renamed "Fluffy," and placed in Hogwarts to protect the Sorcerer's Stone.

Aside from mythical inconsistencies, though, I'll also add that the dialog at times seemed strained and unconvincing, the acting a little unpolished, and the combat choreography poorly executed.

My wife calls me a perfectionist, but really I just want the director to pay some attention to detail. Overall, though, I saw nothing so distracting as to quash my enjoyment of the film. If this were my review, I'd have given it 3 stars out of 5. :)

I didn't mind the use of the hydra, which, as those of us who've read this stuff know, is quite conclusively dead. The same applies to Medusa, but I was willing to let that one go because it was an excuse to get Uma Thurman back into the realm of mythology (Venus in THE ADVENTURES OF BARON MUNCHAUSEN...Droooooool...). But when Medusa's head showed up on the breast of the statue of Athena that's meant to be perhaps a thousand years old, thus accenting the fact that she was dead and now serving time as a part of the Aegis, was annoying. But again I let it go since only us myth geeks would care. I was too busy having a latter day Harryhausen experience to get too pissed off. Stuff that brings me back to the few positive days of my childhood get a bit of a free pass from me. That said, your comments are indeed valid and hopefully the oversights will be improved upon in future installments.