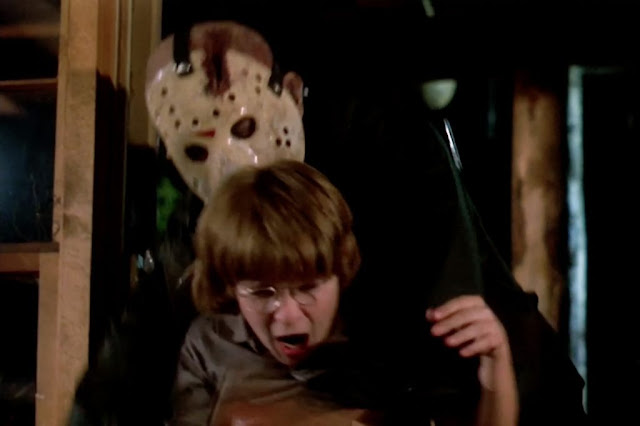 Surprisingly, not a scene from DELIVERANCE 2.

This one's going be a little different, folks, as it's a look back at an event I actually attended back in 1984. This may read like utter bullshit but I assure you that this actually happened, and only about a year ago I found out that another local who later became a good friend upon our meeting during our college years also bore witness to what you are about to read, with her younger brother in tow. With that by way of introduction, allow me to set the Wayback Machine and take you to...

In the bygone days of pre-gentrification, Norwalk, Connecticut was a scuzzy little town with a large quotient of criminals, junkie hookers, drugs, violence and questionable activity; sort of Connecticut's answer to Baltimore. In other words, a great place to for a kid stuck in Westport, the ultra-boring affluent town next door, to hang out in.

The movie theaters in Norwalk ranged from those owned by a theater chain to the independent art/porno/cult movie house, the Sono Cinema. The Sono could get pretty wild, but nothing could compare to a rowdy audience at the infamous Norwalk Theater. Norwalk Theater was the closest thing that Connecticut ever had to the classic Times Square grindhouses insomuch as it specialized in violent, sex-laden exploitation flicks, the kind that drunks and heroin addicts like to sleep it off to. The derelicts in the audience would even make non-sequitor comments at the screen, such as the time when a junkie started yelling "Give her the big one!" enthusiastically during a scene of two cab drivers talking. This sort of evening was my true baptism of fire into the culture of the grindhouse, and I made it a point to attend as many of such screenings as I possibly could.

As anyone who came of age in the United States during the same era when I did no doubt remembers the ubiquity of the "slasher movie" as a transgressive rite of passage for '80's adolescents while simultaneously drawing a deluge of outrage from parents and censors over the genre's gleeful transformation of the silver screen into a celluloid abattoir. The kids ate up the showers of gory dismemberment and murder (with considerable amounts of sex and nudity thrown in for good exploitative measure) and the resulting box office windfall led to filmmakers of wildly varying skill and talent churning out such fodder by the dozens for close to a decade. John Carpenter's landmark shocker HALLOWEEN (1978) served as a solid launching point from which a legion of less-accomplished copycats sprung, but the one that really ignited the craze was the first in the long-running FRIDAY THE 13th series, which debuted in 1980 and in retrospect serves as amusing overture for a considerable amount of the decade's cinematic fare.

Odds are if you're bothering to read this you already know the drill regarding the series formula: Youthful camp counselors turn up at Camp Crystal Lake in order to get the place ready for the summer season, but years before it was the site where malformed and "mongoloid" child Jason Voorhees drowned in its lake while his inattentive counselors were engaging in *GASP* pre-marital sex, after which the pair are murdered by un unknown killer. Since the drowning and murders, Camp Crystal lake has been shut down and is now considered a cursed location by the locals, but some idiot always decides to reopen the place and carnage ensues. In the first film the killer is revealed as Jason's quite-insane mother, as it is made clear that Jason himself has been dead for 22 years, and his mother is quite decisively dispatched via beheading. When the shot-on-the-cheap shocker proved an unexpected box office smash — earning $59.8 million dollars off of a $550,000 budget — a sequel was immediately green-lit and FRIDAY THE 13th PART 2 (1981) made it to theaters less than 12 months later. The problem of continuing the mayhem after the death of the original killer was solved by bringing Jason back from the dead (with no explanation) and unleashing him upon wave after wave of idiot counselor fodder on pretty much a yearly basis, as the films continued to rake in the bucks despite being pretty much creatively bankrupt from the word "go." It was not until the third entry that Jason donned his now-iconic hockey mask — why there would be ice hockey equipment at a summer camp is a question that has haunted me since 1982 — and from there the character joined the pantheon of 1980's horror films' Mount Rushmore, alongside Freddy Kreuger, Pinhead, and Chucky, with the FRIDAY THE 13th/Jason series continuing into the 2000's and bringing the total number of films up to 12. Pretty impressive for what's essentially a case of telling more of less the same "story" — or rather and excuse for gory murders, really — over and over again.

Anyway, opening night came along for the "final" film in the increasingly unimpressive and predictable franchise (which got progressively worse as it lurched on), so I called the aforementioned Norwalk Theater to get myself and a couple of pals in to see it on opening night (I worked for the Cinema National theater circuit at the time, and got in for free to most theaters in the state). The manager said "Come on down," so my friends and I went. Imagine our surprise when we arrived and found the theater looking like it was in the center of a demilitarized zone.

The front doors had been torn off, popcorn and spilled soda had turned the lobby into a quagmire that required a swamp boat to navigate through, and the poor concession girls were shivering and crying. I asked the manager what the fuck had happened and over the Zulu Nation-like din that issued from the audience, I heard her tell a tale of misery and violence. She told me that the patrons had been worked up into such a frenzy over the possibility of finally seeing the previously un-killable Jason Voorhees get his ass kicked that they had actually stormed the entrance, barbarian-style. The place looked like it had been sacked by an army of crazed Visigoths on a PCP bender, was filled beyond capacity (over 550 seats), and roughly ten people in the audience had paid for admission (yet they did pay for their refreshments. Go figure...). There were even four squad cars full of police in attendance, and the poor bastards advised that it would be best to run the movie or else there would have been a full-scale riot.

My friends and I waded into the tumult, and actually managed to score seats when a bunch of stoners got up to sneak a few bowl-hits behind the screen. The lights went down and an unholy roar exploded from the adrenaline-charged throng that would have been totally appropriate at a public beheading. The trailer for 7 DOORS OF DEATH came on, but it was impossible to see due to the impromptu shower of popcorn and malt liquor that obscured the screen. A chant of "Jay-son! Jay-son!" began and only died down when the main feature began. 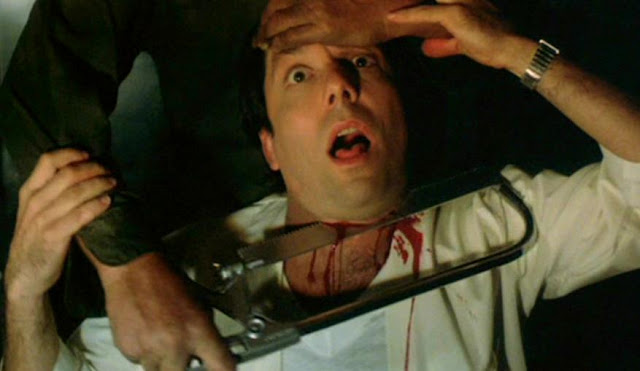 What followed can only be called the greatest display of audience participation that it has ever been my pleasure to witness. Foul rejoinders hurled at characters who couldn't respond, people in the balcony sticking their hands into the projector beam and creating shadow hands that played with the actresses' tits, an out-of-nowhere sing-along to the old "car rock" hit "GTO" (which would have made a modicum of sense if the song had been included in the film)... Folks, we're talking two hours of humor, insanity and "Will I make it out of this movie alive?" terror. If I could download the memory of this show and sell it on DVD, I would be a millionaire overnight.

Anyway, the crowd dispersed peacefully, no one was arrested and the doors were repaired the very next day. Surprisingly, the subsequent showings went off without incident. Oh, and Jason is killed by a young, machete-wielding Corey Feldman (until he returns two films later; don't ask). 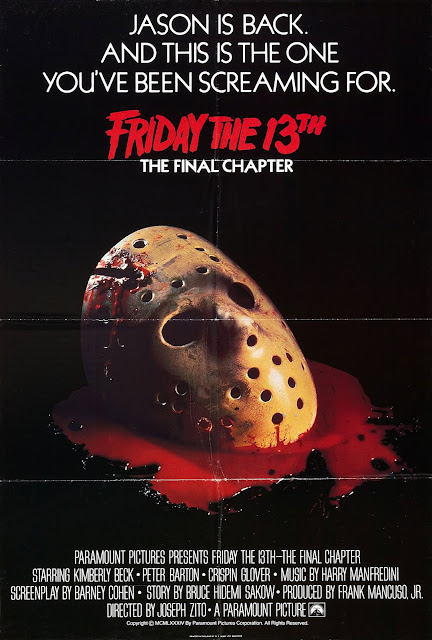