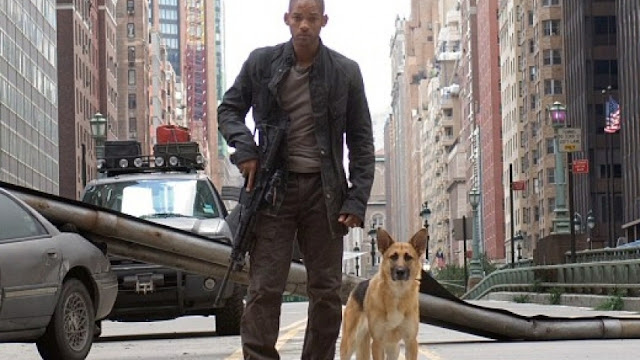 The desolation of post-apocalypse New York, the city that never sleeps...

It's been said that the third time’s the charm, and when applied to this third cinematic adaptation of Richard Matheson’s 1954 science fiction/horror novel I AM LEGEND that assessment is only partially accurate.

Dr. Robert Neville (Will Smith) is a military scientist attempting to cure a pandemic that has wiped out nearly all of the world’s population, leaving him, as far as he knows, the last uninfected man on Earth. You see, the plague was an unexpected by-product of a successful cancer cure that mutated into a virus that killed about 90% of mankind, transforming the remaining survivors into mindless, animalistic “darksiders” who combust when exposed to UV radiation and roam the streets at night in search of food. Neville proves immune to the plague and when not working on the cure he cruises around a desolate Manhattan hunting deer for fresh meat and working his way alphabetically through the DVDs at a deserted video store (he’s up to G), his only companion being a German Shepherd named Samantha (“Sam” for short).

Neville operates from his sumptuous brownstone near Washington Square, a home fortified with all manner of military security and an assortment of no-nonsense ordnance, to say nothing of a fully equipped laboratory, but while he has plenty to occupy his time he’s quite lonely. He broadcasts an endless loop radio message alerting any survivors to his existence and names a contact point where he can be found every day at a certain time, but after three years no one has responded to his message. And as he periodically hunts the infected for anti-virus test subjects Neville notices their behavior becoming more savage and aggressive, even copying the traps he sets for them.

That setup is all you need for a compelling story, and I AM LEGEND is a very, very good film that allows Will Smith a showcase for his acting abilities since he has only a dog to share the screen with and his performance is punctuated by the film having virtually no music throughout its running time. I used to think that Smith was just another pretty-boy who headlined churned-out blockbusters and frivolous flicks, but here he proves beyond the shadow of a doubt that he can act his ass off, imbuing Neville with quiet intelligence, sensitivity, and a loneliness that’s simply heartbreaking.

But the film does have its flaws. The infected antagonists are all rendered in iffy CGI, giving them the aspect of video game characters and causing them to clash wildly against the obviously live Neville and Sam. It almost looks like we’re along for the ride as Neville finds himself in some sort of “shooter” virtual reality simulation. But that quibble is minor when stacked against the real issue: the film actually goes out of its way to not be your standard Hollywood blockbuster/mindless action movie, and as such it’s simply terrific, so why did the filmmakers throw that all away during the last reel? I won’t say what happens — because I still recommend the film nonetheless — but the film totally douches out during the final twenty-five minutes and effectively sinks what could easily have become a classic of the genre. All the striving not to insult the viewer’s intelligence is traded in for cheap sentimentality and an ending straight out of a bad DIE HARD sequel, throwing in bits of business that utterly defy the well-constructed logic that came before. Seriously, once the film nose-dived I was greatly disappointed, especially when I considered just how engrossing it was up to that point.

I don’t know what it is about Matheson’s novel, but for some reason it has never been made into a fully satisfying feature film. THE LAST MAN ON EARTH (1964), with my boy Vincent Price, kept the novel’s straight-up horror edge with the plague victims mutating into vampires, but was hampered by a weak script and a budget that wouldn’t have bought a decent box lunch (although some of the admittedly creepy visuals did inspire George Romero’s landmark NIGHT OF THE LIVING DEAD, so it wasn’t a total loss). THE OMEGA MAN (1971) was basically a backyard G.I. Joe scenario enacted on celluloid, filled with shoot-‘em-up action, car chases, and Charlton Heston in the lead, totally unbelievable as any kind of scientist and coming off as a slightly over-the-top fusion of his earlier turns as Moses, Judah Ben-Hur, and Taylor. And now the 2007 I AM LEGEND comes along and almost delivers a perfect, contemporary treatment of Matheson’s bleak narrative, but it still manages to scuttle all of its virtues by adhering to an unfortunate status quo at the last minute.

Bottom Line, I AM LEGEND is definitely worth checking out for the good stuff, but be prepared for the cop-out when it happens. You have been warned. 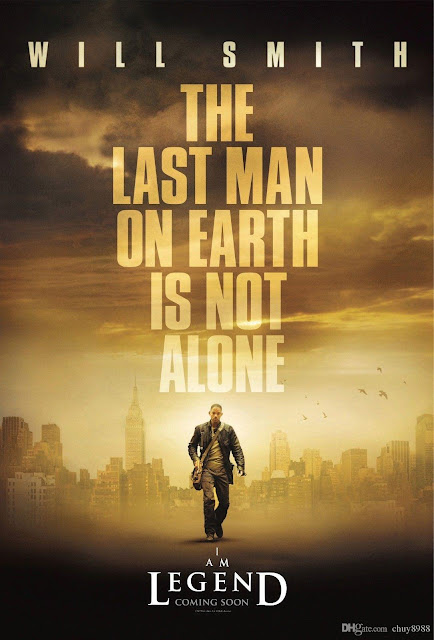