NOTE: This piece originally ran in 2010, but has been slightly updated. 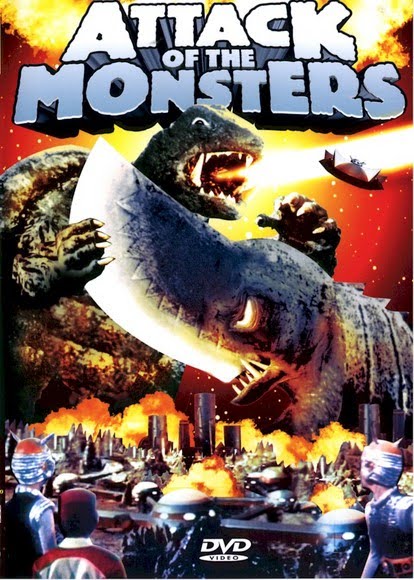 Though I've been a diehard giant monster fan my whole life I can't really say I was a Gamera booster during the formative years of my addiction, despite repeated doses of the character's films on the Tri-State Area's venerable 4:30 MOVIE during the 1970's and early 1980's. Many of my fellow daikaiju addicts absolutely loved the Gamera series at the time, but before moving to Connecticut I had lived in San Francisco and so had been exposed to the charms of ULTRAMAN before seeing Gamera, and while the ULTRAMAN television series was certainly made as a low-budget kid's show, it had a charm and imagination sorely lacking in the Gamera movies. The Gamera films to me seemed like nothing more than cynically-churned-out product to cash in on the success of the contemporary Toho Godzilla films, plus their aggressively kiddie-oriented tone (after the first two films) drove me fucking crazy as a child, especially once the protagonists became precocious kids in those disturbing short pants common to the genre. And as if that weren't bad enough, Gamera itself, once a feared (though rather tatty) city-destroying flying saber-toothed turtle — yes, you read that right — was re-tooled into the ultimate in safe and sanitized nausea, namely "Gamera, the Friend of the Children," complete with a jaunty and utterly sickening signature tune sung by a chorus of untranslated Japanese rugrats. Pee-yuke.

The one thing the Gamera series did have going for it was a stable of opposing monsters that gave those found on ULTRAMAN a run for their money when it came to being both laughable and ludicrous. However, the thing that distinguished one batch of those monsters from the other was that you laughed with the monsters on ULTRAMAN, while you invariably laughed at those who fought Gamera (then again Gamera itself was a giant, flying, saber-toothed turtle, so I guess I shouldn't have expected anything different). Gamera took on such beasts as Barugon (not to be confused with Toho's Baragon), which was basically a humongous iguana that could emit a death-ray rainbow from its back (???) and wielded a tongue that shot a freeze-ray; the evil space-squid Viras that looked like Gumby on LSD, the super-sonic, death-ray-emitting and vampiric Gyaos, and a couple of others of considerably lesser note, but none of Gamera's opponents was anywhere near as endearingly idiotic as Guiron from ATTACK OF THE MONSTERS. Amazingly silly in concept, Guiron is the one Gamera baddie that absolutely everyone remembers, and its memorable status is helped immeasurably by the film being perhaps the best of the original Gamera series. (NOTE: the Gamera series was given a much needed and completely kickass reboot in the mid-1990's, but that's fodder for a whole post on its own.)

ATTACK OF THE MONSTERS, the American dubbed version of GAMERA VS GUIRON, the fifth in the original run,  is a study in simplicity. The story involves three kids, Akio (Nobuhiro Kajima), his apparently American friend, Tom (Christopher Murphy), and Akio's younger sister, Tomoko (Miyuki Akiyama), and their adventure when they witness a flying saucer landing nearby. The kids investigate the saucer and the boys enter it, unwittingly finding themselves trapped when the ship takes off, guided by remote control. Poor Tomoko is left behind and tries to tell her assholishly dismissive mother what happened, but she's continually brushed off as having too much imagination and believing in foolishness (this subplot will piss off every right-thinking person on the planet). The only grownup who believes her is local comic relief cop Officer Kondo (Kon Omura), but his belief in her word is little consolation as she worries for her brother and their friend. 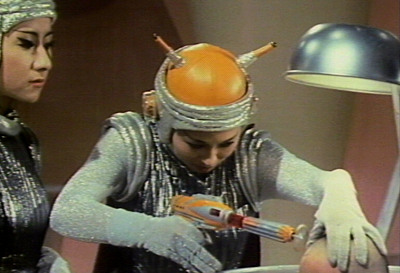 The brain-hungry space-chicks get down to business.

The boys' flight beyond the sun is tailed by Gamera but the saucer's propulsion system kicks into overdrive, leaving Gamera sucking fumes, and in no time the boys have crash-landed on a barren alien world (a crash that happens offscreen, presumably to conserve the obviously limited budget). While checking out the abandoned city they landed in, the kids encounter Flobella and Barbella, two space-cuties who seem friendly at first but are soon revealed to be brain-eating cannibals whose people fled their planet when they lost control over the monsters they had created. One such monster, an outer space analog to the Earth's own killed-by-Gamera Gaos (you can tell it's a "space" version because they spray-painted the leftover Gaos suit silver), flies aimlessly around the place, blowing shit up with its orally-emitted beams, so since they have nothing better to do, the space-chicks send the remaining monster under their control, Guiron, to kill the Space-Gaos. 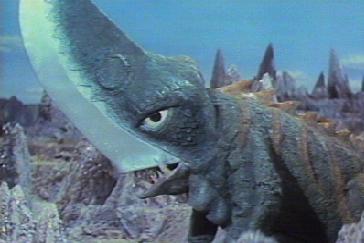 The unforgettable visage of Guiron (or "Knife-Head," as the kids who weren't paying attention liked to call it during my youth).

Guiron's a squat-bodied, dog-like living knife that uses its face as a brutally effective cutting edge, and when that isn't enough it can also launch shuriken (that's "ninja throwing stars" to us gaijin) from sockets located above its eyes. Guiron kicks Space-Gyaos' bargain basement ass in no uncertain terms and, demonstrating an aspect that distinguished Daiei Studios' Gamera flicks from the more upscale Toho efforts featuring Godzilla and pals, uses its blade-face to semi-gorily chop the fallen enemy into several pieces. Beginning with the second Gamera movie, WAR OF THE MONSTERS (1966), Gamera engaged in cartoonishly bloody combat with its foes, even spewing blue/gray monster blood from its own wounds, so this came as no shock to Japanese audiences, but it was quite a surprise to see on American TV in a slot reserved for heavily-sanitized children's programming. Anyway, there's a bunch of mishegoss where the boys try to run away from the cannibalistic aliens, but then Gamera shows up and engages Guiron in some spirited and ridiculous combat before the evil aliens are killed and the boys get to go home (much to the relief of Tomoko, whose tales of a close encounter are satisfyingly vindicated at last). And upon going home, Akio relates that what he's learned from the adventure to another "star" (apparently the screenwriter didn't know or care about the difference between a star and a planetary body), namely that mankind must strive to do better and work to no longer have wars or traffic accidents (the kid is apparently obsessed with traffic accidents since he mentions them at least three times during the film's running time; since his dad is never seen or mentioned, was his father the victim of one such accident?). 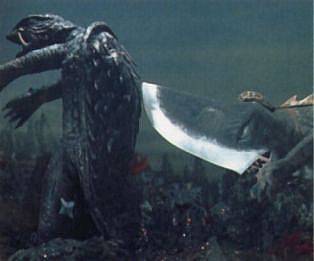 The battle between Gamera and Guiron has justly gone down in giant monster history as one that is spectacular and crowd-pleasing in its silliness, and it even includes Gamera executing moves straight out of an Olympic gymnastics routine involving swinging around bodily on the uneven parallel bars (although Gamera uses a singular bar). 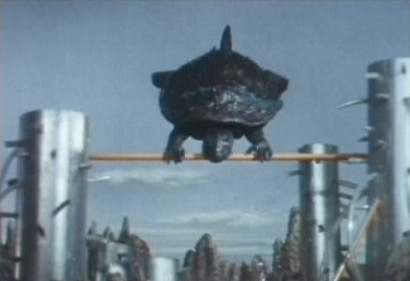 No, you are not hallucinating.

It's simply something you have to see to believe, and I defy you to keep a straight face or not exclaim "You've gotta be fucking kidding me!" when you see it for the first time. But while that bit may stop audiences dead in their tracks, the scene that made me scream "No way!!!" at age eight was when Gamera picks up the flying saucer after it had been sliced in twain by Guiron and spot-welds it with his flame-breath into good enough shape to comfortably support the boys as he carries the saucer back to the earth. 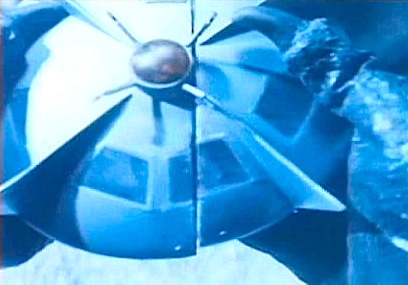 Though obviously a kiddie movie, one thing that I always respected such films of Japanese origin for was the fact that Japanese storyteller seldom shied away from including dark and disturbing aspects in stories for children. Most of the original run of Gamera films have some form of weird or eerie content, and in the case of this movie that would be the sinister intent of Barbella and Flobella. Unlike the villains in stuff like SCOOBY-DOO, the space-cuties flat-out state that they are going to eat Akio and Tom's brains, and they would have gotten away with it too, if it wasn't for those meddling monsters! Even classic fairy tales had horrific elements that frightened and delighted children, which served as a sneaky way of advising caution and awareness during one's own real-life childhood adventures, so stuff like this is a great way to break the little ones in early.

So when all is said and done, ATTACK OF THE MONSTERS is a fun way to spend roughly eighty minutes, and even the kid characters in it are tolerable (for once). And long after the days when it ran in after-school time slots, the film resurfaced in a pointlessly and terribly re-dubbed version when it (and apparently the rest of the original series Gamera films) fell into the hands of TV producer and film distributor Sandy Frank and was re-titled GAMERA VS GUIRON for VHS release. The movie would probably have gathered moss on the nation's home video retailer's shelves had it not been scooped up for an epic session of verbal abuse in a 1991 installment of the frequently hilarious cult TV showcase for truly awful movies, MYSTERY SCIENCE THEATER 3000. 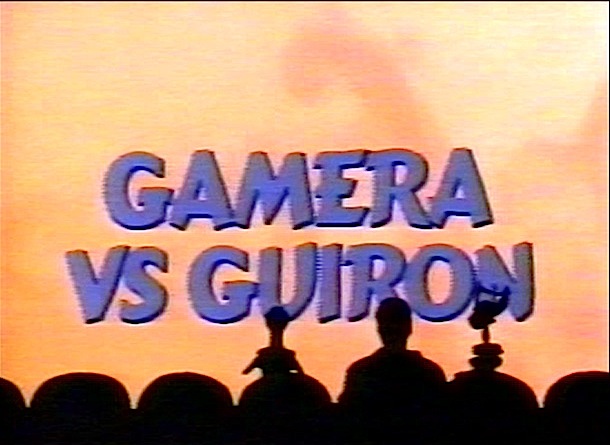 As seen on MYSTERY SCIENCE THEATER 3000.


If you ask me, the other Gamera films were the ones that really needed the MST3K treatment to make them bearable, especially the turgid GAMERA VS BARUGON, but the MST3K handling of GAMERA VS GUIRON makes the most of a film that is both silly as hell and entertaining, so it was a win/win. But it was good to see the film in its initial American version again and it was well worth the five bucks it cost to add it to my library of giant monster movies.

And I have to ask: why the fuck did Sandy Frank feel the need to re-dub all the Gamera movies that fell under his company's banner? The new dubbing is truly appalling, far worse than even some of the most poorly-dubbed kung fu films I've seen (it's worse than the dubbing found in SHAOLIN KUNG FU MYSTAGOGUE, and that's really saying something), so does anyone out there have an answer s to why it was done? Please write in and let me know! 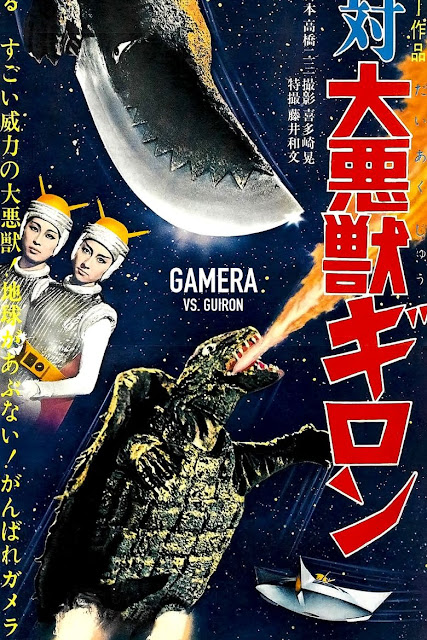