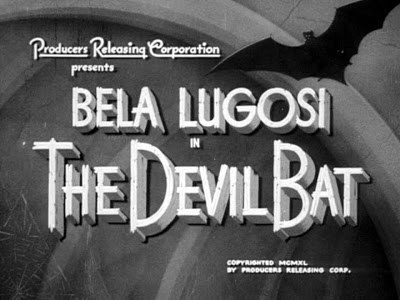 Can one really honor the season of horror without a Bela Lugosi movie on the roster?

Brilliant chemist Dr. Paul Carruthers (Bela Lugosi), bitter over what he perceives as the successful company he works for growing rich from his work but not awarding him his fair share of the profits, has crated a chemical that when smelled by a huge scientifically-altered bat causes the animal to go berserk and destroy the source of the scent. 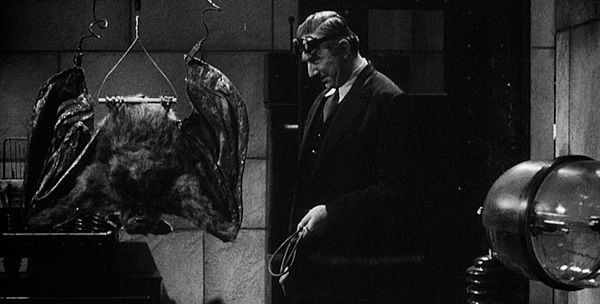 Passing off the chemical as a mens' aftershave, Carruther's sneakily manages to apply it to the necks of those upon whom he seeks vengeance, and in no time the area is plagued by mysterious nighttime throat-slashings apparently committed by a "mouse." The murders are investigated by smooth reporter (Dave O'Brien) and his annoying comic relief photographer sidekick, and Dr. Carruthers is eventually and inevitably a victim of the horror that he himself created.

Long slagged off as just one of the legion of cheapie pieces of crap shat out by studios of a far lesser pedigree than Universal during the heyday of the classic Universal horror cycle, THE DEVIL BAT, also released as KILLER BATS, indeed lives up (or down) to its reputation, but unlike many of its bargain basement brethren, it has the advantage of Bela Lugosi as its villain. An indelible horror icon thanks to his legendary performance as Count Dracula in Universal's genre-defining 1931 production of DRACULA, Lugosi's time as a superstar was brief and he soon found himself mostly languishing in a stream of poverty row flicks designed to fill out a double-bill, though still turning up from time to time in A-list pictures like SON OF FRANKENSTEIN (1939) and THE WOLF MAN (1941)  in supporting capacity. But the schlock far outweighed the quality efforts, and Lugosi became something of an unintentional self-caricature as a result, which made him ideal for over-the-top "evil foreign scientist" roles. As his career wound down, he became hopelessly typecast, developed a tragic narcotics habit, and ended up as a friend and collaborator with infamous "worst director of all time" Edward D. Wood, the mastermind behind the legendarily bad trifecta of GLEN OR GLENDA (1953), BRIDE OF THE MONSTER (1955), and the schlock masterpiece that is PLAN 9 FROM OUTER SPACE (1959).


THE DEVIL BAT afforded Lugosi the chance to work his signature Hungarian-accented magic in a film where every other cast member is pretty much a plank of wood — with the exception of Dave O'Brien, who gained unintended screen immortality/infamy as the hysterical stoner criminal who demands "Play faster...FASTER!!!" in REEFER MADNESS (1936) — and the presence of the goofy-looking titular monster, represented by a tatty prop on a string, is the charming epitome of a crappy old school practical effect. 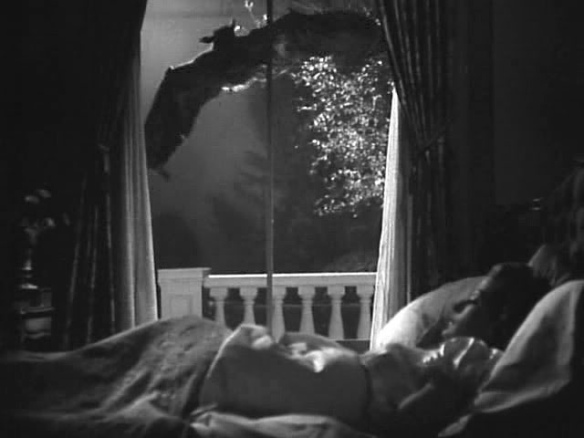 Long available on home video as a cheap public domain item and currently to be viewed for free on YouTube, THE DEVIL BAT is worth checking out as a fun way to kill 68 minutes, especially if one happens to have some beers and a loaded bong. Bottom line: Even cheapjack Lugosi is better than having no Lugosi at all. Oh, and this was directed by Jean Yarbrough, who also brought the world SHE-WOLF OF LONDON (1946), a disappointing alleged werewolf movie in which there turns out not to be a werewolf committing the story's murders, and HILLBILLYS IN A HAUNTED HOUSE (1967), a truly awful country-western horror-comedy musical that I have to get around to  writing about one of these days... 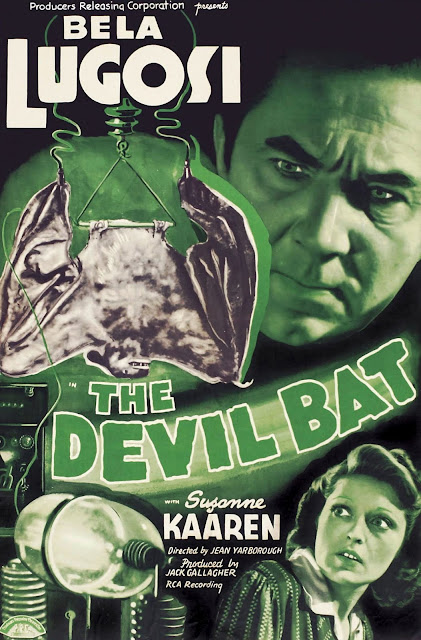