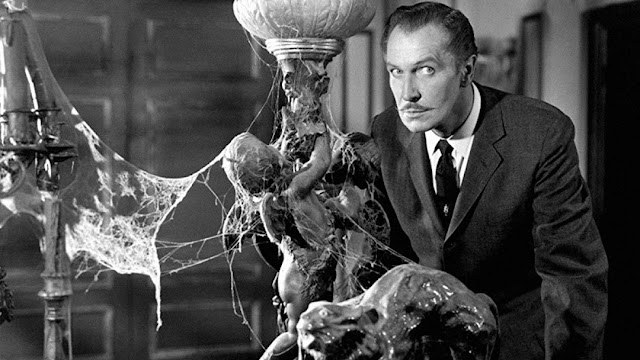 Halloween just isn't Halloween without a visit with Uncle Vinnie.

I'm including director William Castle's HOUSE ON HAUNTED HILL in this year's roster more for its atmosphere rather than it actually being a straight-up horror film, per se, though it certainly possesses many of the genre's requisite elements. I'm going to gloss over the details of the plot, but the basic gist is that a wealthy eccentric (Vincent Price) invites five people to his ultra-creepy mansion as guests at a party he's throwing for his fourth wife (Carol Ohmart), with each guest promised a reward of $10,000 if they manage to stay in the house overnight once it is locked tight at midnight. The only thing the guests have in common is a dire need for the cash, while the millionaire and his wife have a relationship that could kindly be described as "caustic." The millionaire is absolutely convinced that his wife is out to murder him via poison and abscond with his fortune, so he's wary of her actions, while all present must contend haunting by the ghosts of people who had been murdered in the house in previous years. All manner of chicanery goes on between midnight and sunrise, including sightings of assorted spectres, minor gruesomeness, faked suicide, a rampaging skeleton, and even an acid-pit in the basement, and in the end all is revealed, for better or worse... 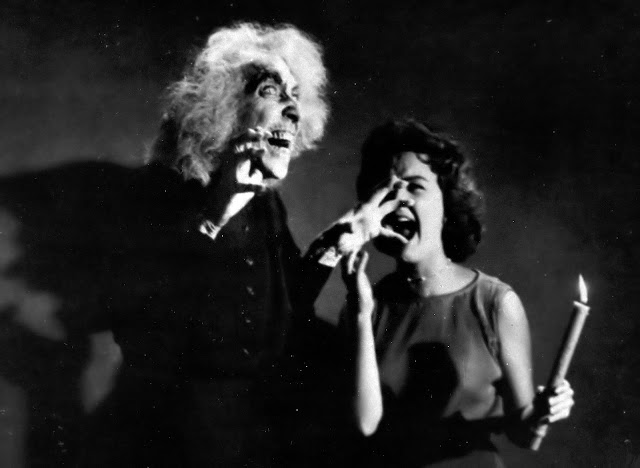 Welcome to the party!

Basically a late-1950's entry in the "old dark house" sub-genre, HOUSE ON HAUNTED HILL has always struck me as pretty much a haunted house "spook show" event translated to the screen, and as such it's rather charming and definitely a must-see for budding horror kids during their formative years. Short of there being actual supernatural activity, the story features pretty much everything one has come to expect from this realm of the horror landscape, such as a residence that looks like the Addams Family should be living there, tons of black & white atmospheric eeriness that practically drips from the screen, "ghosts" that are revealed as part of an elaborate hoax, said hoax turning out to be an unnecessarily convoluted act of vindictiveness as self-defense (though it could easily be argued in court as premeditated murder), and the always welcome of dear Vincent Price, whom some of us horror kids of a certain vintage lovingly refer to as "Uncle Vinnie." If he was involved, a good time was guaranteed, even if the movie sucked — I'm looking at you, DR. GOLDFOOT AND THE GIRL BOMBS (1966) — so Price became family by proxy. 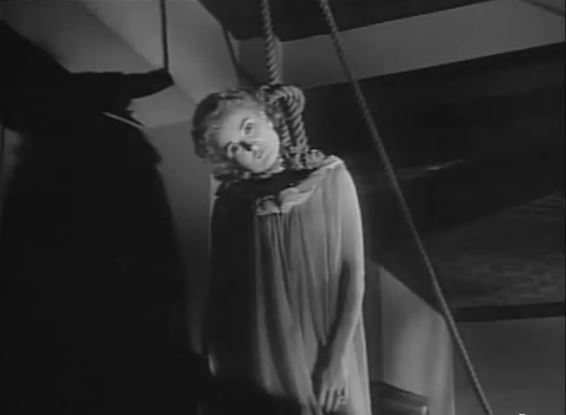 Don't try this at home, kids.

Director William Castle was a showman and a half who managed to spice up several of his films with memorable (and often ridiculous) gimmicks that lured in audiences who were glad to be in on the cheesiness, and HOUSE ON HAUNTED HILL was no exception. Next to "Percepto!" in THE TINGLER (also 1959) — in which selected seats in the audience were wired to vibrate — Castle's best-known gimmick had to be HOUSE ON HAUNTED HILL's "Emergo," which was a plastic skeleton on a wire that would float over the audience at the appropriate moment in the narrative and, according to some who were there to witness it when it came out, served as a moving target for projectiles hurled at it by hopped-up kids in the audience. 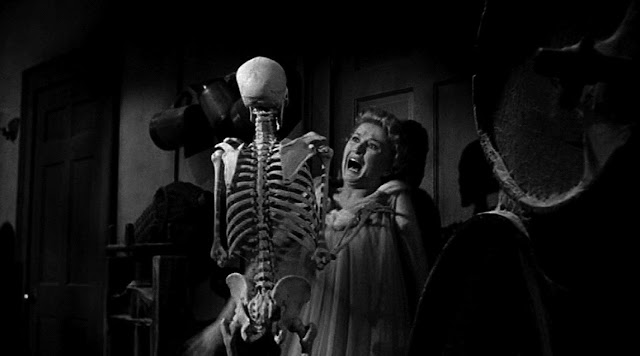 The horror of "Emergo."

Like I said, it's all spook show stuff, and while not what I would ever consider scary (not even when I was a kid), it's entertaining and a study in creating atmosphere in the post-Universal/early Hammer years. 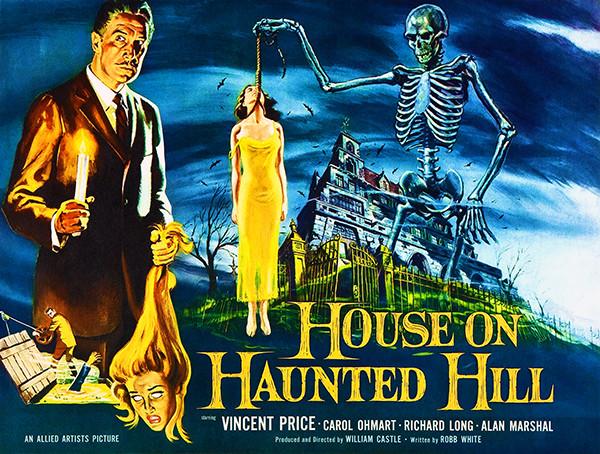