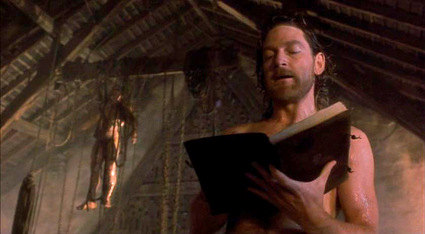 The science of playing God while being a shirtless hunk.

Is it even possible to calculate how many film adaptations there have been of Mary Wollstonecraft Shelly's 1818 literary landmark, FRANKENSTEIN; OR, THE MODERN PROMETHEUS? Much like trying to take an accurate tally of how many iterations there have been of Dracula onscreen, it's likely an impossible task and definitely a thankless one, especially when trying to narrow it down to a translation that is faithful to the source work in ways other than featuring an obsessed scientist and the misbegotten creature that he cobbles together from pilfered cadaver elements and somehow  infuses with life. Those basics are apparently all one needs in order to put asses in seats, but doing so strips Shelly's dense and evocative work of most of its nuances and subtle exploration of its themes (subtle for something written in its era and of that time's prose style, that is). Love the Universal and Hammer iterations though we do and that have become culturally indelible within the overall landscape of horror, that stuff only mined minimal aspects of Shelley, which, to be fair, may have been for the best, as the average Joe Sixpack in the audience would likely not have the patience to make it through the book's dense period prose.

Following the box office success of 1992's BRAM STOKER'S DRACULA, produced and directed by Francis Ford Coppola, Coppola once more rolled the dice and served as producer of 1994's MARY SHELLY'S FRANKENSTEIN, directed by and starring Kenneth Branagh. Hewing closer to the novel than most previous adaptations, though nonetheless making a few alterations here and there that didn't hurt the overall narrative, the end result comes off as kind of a MASTERPIECE THEATER take on the material, replete as it is with period atmosphere, lavish costumes, stunning sets, actors of quality and class, and obvious care and effort put into the proceedings by all involved. It retains much of the novel's classy-but-visceral punch, but it's admittedly not a movie for those expecting Universal's level of dark fairytale atmosphere or Hammer's go-for-the-guts approach to then-groundbreaking levels of thrills involving gore and suggested sexual content. Branagh does not paint the screen with the red stuff, and instead he gives us a period drama that happens to involve ill-advised, forbidden science and the tragic misunderstood and rejected creature that results from that work. It's classy as hell, but that adherence to classiness renders a lot of the action pretty but inert. 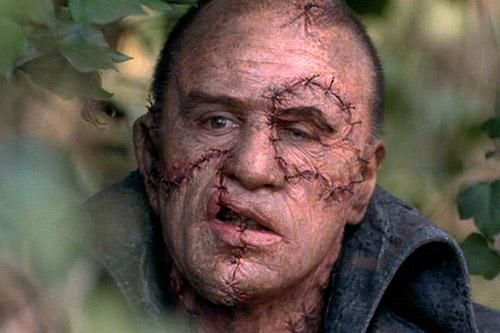 While Kenneth Branagh is serviceable as Victor Frankenstein, he never fully manages to  engage as as character and only really serves as a catalyst for the plot moving point to point. Instead the real selling point here, at least for those of us who have read the novel, is the unlikely casting of Robert De Niro as Frankenstein's creature, a scarred, hideous mockery of man who, in a rare move for cinematic depictions of the character, is allowed to be as intelligent and eloquent as Shelly's vision of the monster. That intelligence and eloquent gift for self-expression lends the creature a depth and pathos as something far more than the often silent or mono-syllabic stiff-limbed revenant juggernaut, and it's a version that I wholeheartedly embrace. His journey in the novel is fascinating as he seeks answers to the purpose of his existence, and by extension ours. Though the novel's depth in that area cannot hope to be replicated in a 123-minute film, what De Niro was able to get across here is both admirable and respectful to Shelly's creation. In short, I loved him in the role. 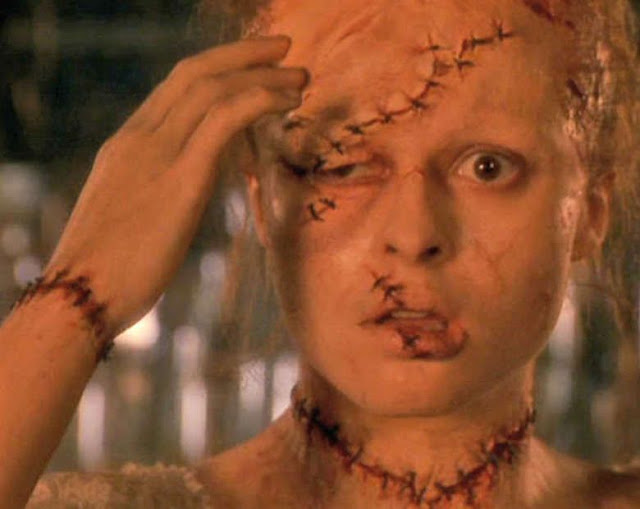 We even get treated to Helena Bonham Carter as the monster's bride, created from the reanimated corpse of Victor's adopted sister/wife, in a bit that rewrites a key segment in the novel. In Shelly's version, the creature demands that Frankenstein create a mate for him, and once she is completed the creature and his new companion will leave and never be seen again. So swears the creature, but Frankenstein, concerned that the creature and his mate will eventually reproduce and spawn a race of god-knows-what, reneges on the deal and destroys the female creation just before bringing it to life,  thus spurring his male creature to further acts of murder and bitter revenge. In the film, the bride's existence is indeed brief — echoing the too-short screen time of Elsa Lanchester's classic version in BRIDE OF FRANKENSTEIN (1935) — but she's always a welcome presence who manages to only deepen the male creature's soul-deep misery.

MARY SHELLY'S FRANKENSTEIN is worth sitting through for Frankenstein completists and for those who appreciate the articulate monster of the novel. Otherwise, viewer mileage may vary considerably... 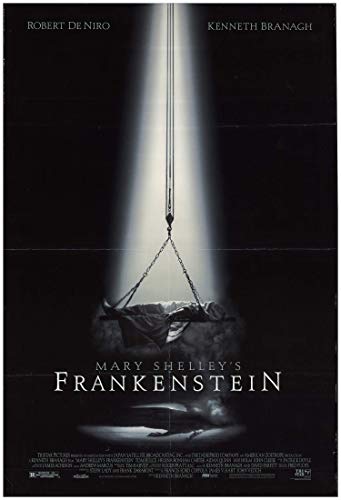