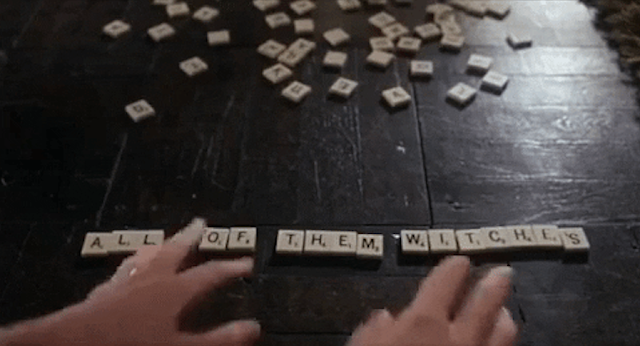 It's 1965 and young marrieds Rosemary (Mia Farrow) and Guy Woodhouse (John Cassavetes) move into NYC's Branford building, an opulent and ominous apartment complex that has a long history of association with cannibalism, witchcraft, and murder, thus earning it the nickname "the Black Branford." Guy is an aspiring theater actor who can't catch a break, while Rosemary is a stereotypical WASPy Catholic who's the epitome of the "good girl." Upon moving in, Rosemary befriends Terry (Victoria Vetri), another young female tenant who is the focus of the rather intrusive attentions of Roman (Sidney Blackmer) and Minnie Castavet (Ruth Gordon), a pair of elderly residents who have been in the building for ages. When Terry dies in a questionable manner that appears to be a grisly suicide, the Castavets, transfer their intrusive presence to Guy and Rosemary, suddenly expressing an obsessive interest in whether or not the young couple plans on having children. Humoring the Castavets out of consideration for their grief over the loss of their pregnant object of attention, the Woodhouses allow the oldsters into their lives, and from then on Roman and Minnie, especially Minnie, become an almost-constant presence. They introduce the Woodhouses to their group of equally decrepit friends and Guy strangely becomes firmly entrenched in their group.

Then comes an evening when the young marrieds enjoy a meal and some wine, just the two of them, and Rosemary becomes quite drunk, more drunk than one should be from just a few glasses of wine. Guy takes her to bed, where Rosemary slips in and out of consciousness, seemingly dreaming the presence of the Castavets and their crew of fogies along with Guy, all of them naked and surrounding her now-naked body on her bed. 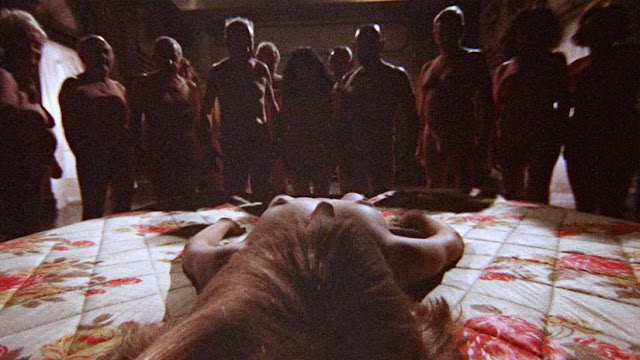 It is then that a vision of the Devil himself enters the scene...and Rosemary. As Rosemary is apparently ceremonially raped by Satan, she perceives, to her utter horror, what's happening not as a dream, but as an event occurring in the very immediate here and now. 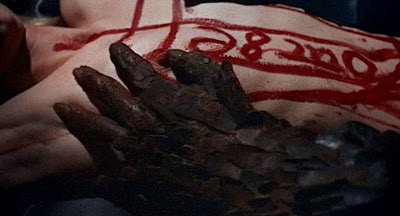 Upon waking the following morning, a hungover Rosemary notes scratches all over her body, which Guy explains away by creepily stating that the wine got the better of him during the previous night, so he had sex with the totally out-of-it Rosemary, noting that he got so into it that he ended up scratching her with his nails, which he notes he subsequently filed down...

Rosemary finds herself pregnant and she is over the moon with happiness, joyously imagining a son named "Andy," and once the news is out the Castavets and he rest of the coffin-dodgers become inescapable. The old women feed Rosemary weird concoctions cited as "folk remedies" that will help with her pregnancy, along with giving her a charm of Tannis root to be worn around her neck as a kind of good luck charm for an expectant mother. This charm also happened to be identical to one worn by the deceased Terry, and it too was a gift from the Castavets... And while all of this is going on, Guy's acting career suddenly begins to ignite.

For the rest of her progressing pregnancy, Rosemary is pretty much kept isolated from the outside world, save for the regular fixtures of Guy and the Castavets. Her physical health undergoes a number of very bizarre changes, but Dr. Saperstein, an obstetrician conveniently recommended by Roman and Minnie (who just so happen to be tight with him), takes over her prenatal care and assures her that everything is going just fine, despite all the evidence to the contrary. Rosemary's best friend, an older gentleman named Hutch (Maurice Evans), takes note of all of this and, already being aware of the Branford's dark history, starts looking into matters. Hutch then unexpectedly dies, but he leaves Rosemary a copy of the book ALL OF THEM WITCHES, along with a warning that "the name is an anagram." With that mystery set before her and her date for giving birth fast approaching, Rosemary begins to piece together the dire truth behind all that's been going on, and that truth is one that a good Catholic girl is in no way prepared for, especially not in the allegedly rational/empirical New York City of the 20th century...

In the five years prior to the release of THE EXORCIST and the deluge of diabolical fare that swiftly followed in its wake, the film adaptation of ROSEMARY'S BABY, from the best-selling novel by Ira Levin, was the "big one" in the sub-genre of devil cinema, and it remains one of the very finest of such entries. A study in suspense from the word "go," the narrative is firmly grounded in a wholly believable reality, and it is that utter realism that makes the story work. This is not a "BOO!!!" tale meant to send viewers jumping out of their seats. Oh, no; it is instead a well-paced slow burn of tension and escalating paranoia that makes us wonder if all of this devil nonsense is all just in Rosemary's head. It's  very low-key in terms of visceral shocks expected from the horror flavor, but when one sits down and really thinks through all that has been done to Rosemary, especially by her fully-complicit piece of shit of a husband, the Devil almost comes off as something of a Piker when one does all the math.

Bottom line: ROSEMARY'S BABY is at the top of the heap of the entire horror genre, or any other type of cinema for that matter, and that's a considerable achievement. Director Roman Polanski — yes, that Roman Polanski —wove a masterwork with this one, and it's perfect in just about every way. In fact, if truth be told, ROSEMARY'S BABY was my very favorite horror film from the time I was nine until I hit my mid-twenties, largely due to just how well-crafted and believable it was. But as I grew older and began to approach the horror genre as something for consideration as an art form,   THE TEXAS CHAIN SAW MASSACRE  (1974) took its place as my favorite, by virtue of it being the elemental cautionary horror story told at its most basic for the modern era. ROSEMARY'S BABY, on the other hand, is anything but basic, as it examines a number of deep-rooted fears within the human psyche, with the fears of the unknown aspects of a woman's first experiences with the primal realities of pregnancy, childbirth, and motherhood. A simple campfire spooker this ain't, and over five decades later it still stands as a towering achievement in its niche. One of the all-time classics, if you have not see this, watch it immediately.

Just be sure to skip the awful made-for-TV sequel, LOOK WHAT'S HAPPENED TO ROSEMARY'S BABY (1976) and the dreadful sequel novel, SON OF ROSEMARY (1997), also by original author Ira Levin, which features possibly the very worst ending that I have ever read in any novel. Just so you won't waste your time reading that outright waste of trees, allow me to spoil the ending for you: Rosemary's son has grown up to age 33 and is about to embark on a plan that will destroy all human life on earth, with a now-aged Rosemary as the one positioned to thwart him. As things come to Satanic fruition, Rosemary suddenly awakens and it's 1965. The events f the first novel/movie adaptation and the sequel novel were all just in bad dream brought on by her reading Bram Stoker's DRACULA in bed. No, seriously. I shit you not, that's actually how the book ended, thus rendering one of the best horror stories ever told utterly null and void. In the words of my late, esteemed Christian grandmother, "FUCK THAT BULLSHIT." 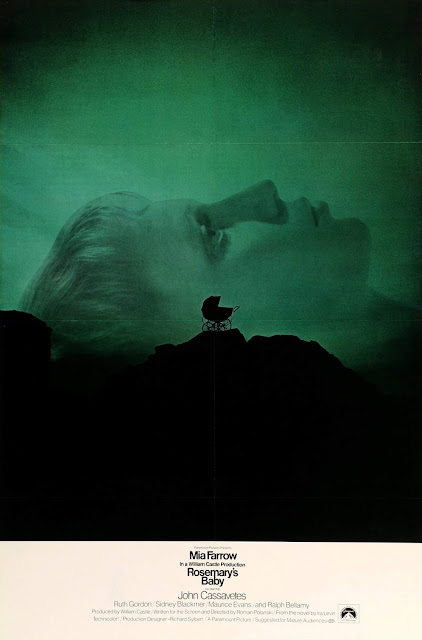