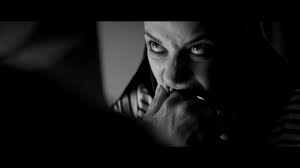 A new take on "finger food."

In a desolate, surreal borderline-ghost town in modern Iran, a silent, chador-wearing vampire (Shiela Vand) stalks the nighttime streets in search of prey. Her adventures bring her into the lives of a hard-working young handyman (Arash Marandi) who is burdening with caring for his heroin-addicted father (Marshall Manesh), a nasty drug-dealing pimp (Dominic Rains), an aging prostitute (Mozhan Marnò), and a money-grubbing street urchin. The dreamlike narrative flows at a leisurely pace and offers a welcome reprieve from the sparkly teen-angst nonsense of TWILIGHT and other recent vampire stories that pretty much neutered the undead suckface as a staple horror entity, and it wears its black-and-white art house origins on its sleeve. 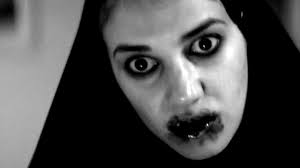 Shiela Vand as the unnamed vampire, listed in the credits as "The Girl."

Rich in atmosphere and definitely worth checking out, some hail this work as beings something of a modern classic, possibly even "the best vampire film ever made," and while I did find it interesting while watching it, the more time I have had to think about it, the more I find it be be noteworthy but sometimes too artsy for its own good. The script and performances are quite solid, but if one is looking for genuine visceral scares, this is not the film for you. The gore is minimal — though a scene involving a finger is a real "Oh, SHIT!!!" moment — and the piece is the slowest of slow burns, but I really liked Shiela Vand's vampire, whose chador replaces the requisite opera cape as an eerie shroud, especially as she makes her way through the barren urban wasteland like a lonely shadow. If I had to single out a favorite moment, it's when the vampire decides to fuck with the head of the aforementioned street kid. During that sequence the audience is completely aware of what she is, but the child is not (at first), so when she blocks his path no matter which way he turns, it's unnerving. She draws him close and reveals her fangs, thus alerting him to the indisputable fact that his life is utterly in her hands, and though she does not feed upon him she lets him know that she could at any moment she wished and that he had better be good, for she will be keeping her eye on him. It's subtle, genuinely terrifying in a very quiet and intimate way, and it's vexing that the rest of the film could not maintain that level of edge-of-your seat tension throughout.

Shot on a budget that would not buy a decent bucket of friend chicken, writer/director Ana Lily Amirpour turns in a well-crafted directorial debut that is worthy of praise, despite my own personal reservations regarding certain aspects of the film. It's better-crafted than major studio productions whose budgets could fund small countries and it displays more creativity than the churned-out product that gluts the nation's movie screens, so it's worthy of support. And though it's an American film that was shot in California, A GIRL WALKS HOME ALONE AT NIGHT is entirely in Farsi with English subtitles, which gives it the feel and flavor of a foreign film in the guise of an art house modern-day western with at vampire as its nexus. It's a strange little film, and I'm intrigued by where Amirpour's evolution as a filmmaker will take her and her audience going forward. 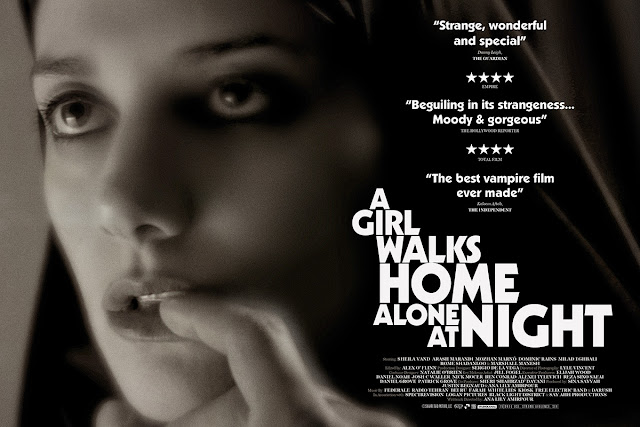