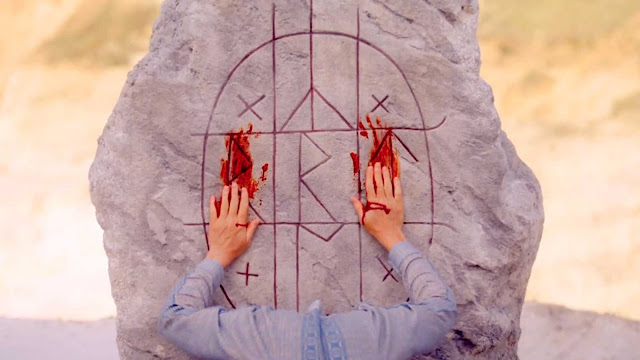 In the realm of ritual.

The relationship of anthropology grad students Dani (Florence Pugh) and Christian (Jack Reynor) is clearly nearing its end, but the pair find themselves ill-advisedly staying together in the wake of Dani's sister's suicide by carbon monoxide asphyxiation, an act that also takes the sisters' parents as well. With nerves already frayed by the impending breakup, Dani is reduced to a clingy, emotional mess (which is wholly understandable), which puts the reluctant Christian in a position where going through with the breakup would be an act of horribly-timed cruelty. The pair stay together but Dani finds out about Christian's plans to embark on a combination vacation/anthropological trip to a remote area of Sweden with two friends, Josh (William Jackson Harper) and Mark (Will Poulter). Invited to Hälsingland by native exchange student Pelle (Vilhelm Blomgren) to his ancestral commune, the Hårga, Christian and his buddies are psyched for the excursion and plan to study the community's annual midsummer festival, with this year's event being a special version that occurs only once every ninety years. When Dani assumes she is to accompany the group on the trip, Christian reluctantly invites her along, much to the displeasure of his friends. Though they play nice and invite Dani to join them, it's very clear that the presence of Dani throws a monkey wrench into what the three men envisioned as a good time, and now all are aware that they'll have to instead be Dani's emotional babysitters.

Upon arrival at the Hårga, all are charmed by the commune's rustic beauty and the quaint ways of its people, though Dani remains on edge. With Pelle as their native guide, the students are introduced to the community and a pair of British exchange students, Connie and Simon, who were also invited by Pelle. Once introductions are made, the first of a number of psychedelic experiences occurs, with the inaugural trip consisting of psilocybin mushrooms. Dani's fragile emotional state does not react well to the magic fungi, and she experiences distressing visions of her dead sister.

Things soon take a hard left from the idyllic, modern day hippy-dippy vibe as the visitors are invited to witness the first phase of this special festival's rituals and immediately find themselves confronted with the Hårga culture's "old ways" — and I do mean very old ways —and to say more would be to ruin a truly intense banquet of visual sumptuousness that collides head-on with visceral arcane rites that have managed to survive into the new millennium.

Though at its heart a warped metaphor for a relationship's complete and utter erosion, what struck me about MIDSOMMAR was its matter-of-fact outlining of the Hårga's way of life and its rituals without really passing judgement on what occurs as being "evil," per se. Their ways are ancient and very, very pagan, and if you have ever studied up on such rites throughout European history, you know that a considerable amount of violence and what we today would consider outright gruesome and barbaric torture goes with the territory. Saying more would give away some major-league splattery and sensual shocks, but keep in mind that while I personally would not consider this a straight-up thriller-style horror film, MIDSOMMAR does include some horrifying moments of gore and one especially graphic sex scene that I'm kind of surprised that the MPAA allowed to slide by without granting the film an NC-17 rating. And if you need some kind of frame of reference, MIDSOMMAR falls into the category that has come to be known as "folk horror," and as such it's very reminiscent of what is perhaps the acme of the sub-genre, namely THE WICKER MAN (the superb 1973 version, not the unintentionally hilarious 2006 remake with Nicloas Cage), and coming from me a favorable comparison to THE WICKER MAN is high praise indeed. That said, this is in no way a date movie...

Related anecdote: When I saw the film with my dear friend Suzi, a young couple was seated to my immediate left, and whenever the gore occurred and especially when the aforementioned sex scene took place, the male immediately covered his girlfriend's eyes to shield her from the "objectionable" material. She did not object in the least. 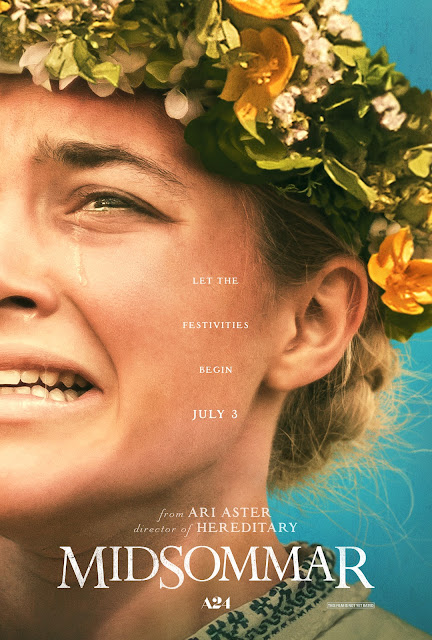