Darling, it's better down where it's wetter...NOT.

At the isolated Aquatica undersea research lab, bio-engineers seek the cure for Alzheimer's disease by chemically altering the brains of deadly Mako sharks, making them super-intelligent in the process. What could possibly go wrong? The answer to that sarcastic question is "pretty much everything," as the sharks go buck-wild, graphically kicking things off by depriving one of the scientists of his arm. 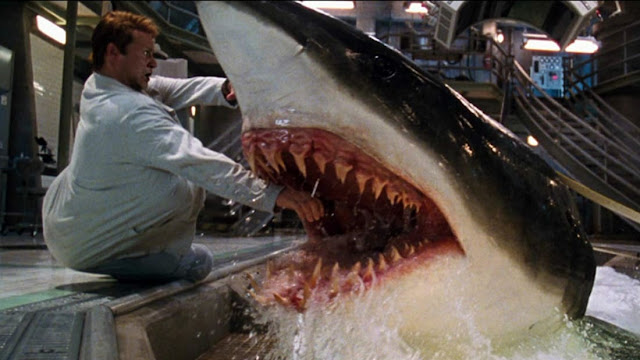 You, sir, are royally fucked.

Medical evac is called for but the rescue effort is thwarted by a severe storm while the pissed-off sharks attack the submerged lab, flooding the facility and trapping the occupants within. As the water level rises and the humans attempt to make their way up through the structure to the surface, the site becomes a watery, claustrophobic labyrinth in which relentless, razor-toothed death lurks around every corner.

Basically a DOCTOR WHO-style "base under siege" story, DEEP BLUE SEA enjoys something of a mixed reputation, depending on who you ask, and I come down firmly in the camp of those who love it. Directed by Renny Harlin, who had previously provided such solid actioners as DIE HARD 2 (1990), CLIFFHANGER (1993), and the criminally-underrated THE LONG KISS GOODNIGHT (1996), the film is very "Hollywood slick" for what is essentially a popcorn-muncher of a monster movie, but it is undeniably suspenseful as hell and a great deal of fun. I pretty much summed up the gist of the story, though I intentionally shied away from giving away too much, as the film packs a good number of very visceral surprises, including one truly shocking and utterly memorable moment that has earned the movie smiles of remembrance once it comes up in conversation. If you've seen this film, you know exactly what moment I'm referring to. 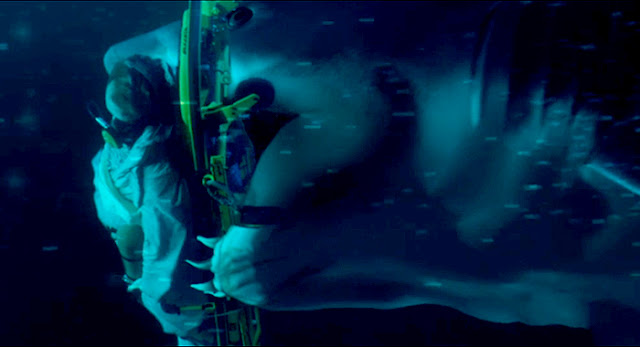 When your day at work goes from bad to worse.


In the wake of the international blockbuster success of JAWS, filmmakers around the world sought to cash in and unleashed a torrent of mostly awful shark movies, so when looking at shark thrillers as a sub-genre of horror, the roster of genuinely good or worthwhile entries is indeed a short one. Thankfully, DEEP BLUE SEA is one of the best of the lot, and it comes in third in my personal ranking of "shark as sea monster" flicks, with  THE SHALLOWS at number 2 and, of course, JAWS taking the top spot. Absolutely worth your time and featuring terrific-looking sharks and some very nasty kills, this one is popcorn cinema at its most enjoyable.

(SIDE NOTE: This film came out around the same time as THE BLAIR WITCH PROJECT, and after my friends and I saw that critical and box office darling and found it to be a boring, un-scary disappointment, we sought to salve our irritation by going to DEEP BLUE SEA. It did the trick.) 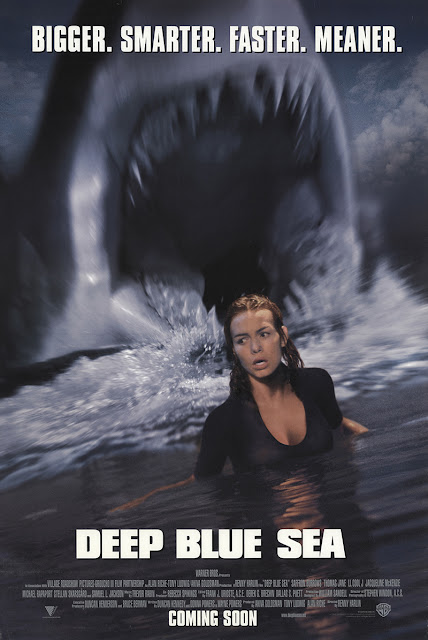