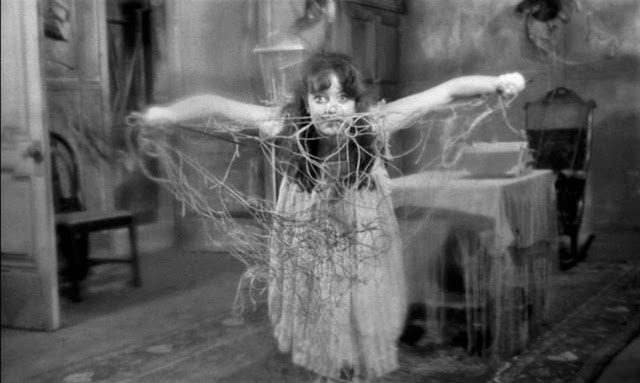 Playing the deadly game of "spider."

In an unspecified rural location, high atop a hill off of a remote back road sits the Merrye House, home to the last remaining members of a branch of the Merrye family. Cursed with a degenerative disorder wrought by generations of inbreeding, the brains of the Merryes regress to a childlike state as they age, eventually leaving them in a permanently, homicidally feral. The family's chauffeur, Bruno (Lon Chaney Jr.), promise the dying Merrye patriarch that he would care for the remaining members of the clan, so he keeps them isolated within the confines of their decaying house while serving as their surrogate father figure. Allowed to roam about the place freely are siblings Elizabeth (Beverly Washburn), titular "spider baby" Virginia (Jill Banner), and non-verbal grownup toddler Ralph (Sid Haig), a bizarre trio who would be right at home in an even darker answer to the cartoons of Charles Addams. All are young adults and the girls are both quite appealing and nubile, but they both possess roughly the mental/emotional development of a five-year-old, with Elizabeth being the craftier and more dominant of the two, while Virginia adores spiders and plays disturbing games where she imitates them and arms herself with a pair of wicked butcher knives that serve as her "sting." 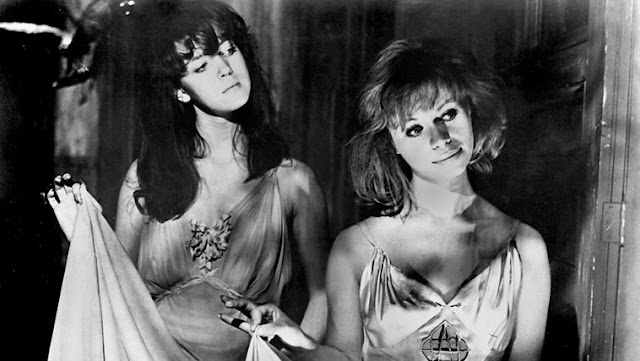 Their brother Ralph, on the other hand, is a borderline-feral, non-verbal, open-mouthed and perpetually smiling idiot who is not unfairly described as "just a big kid." That said, his look and behavior are quite unnerving, as he is a grown male who is apparently sexually functional, and he brings to mind a larger variation of Schlitzie the pinhead from the classic FREAKS (1932). 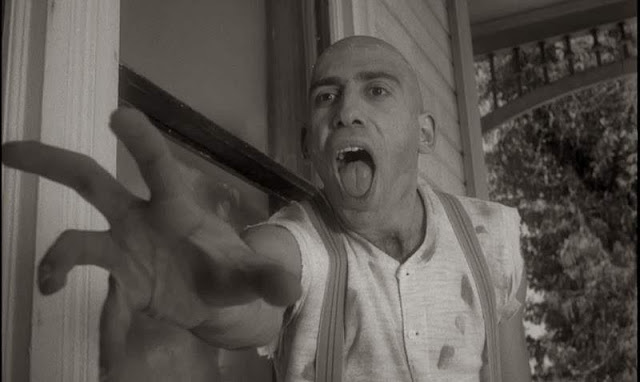 Lastly, residing in the basement are the fully-feral Uncle Ned, Aunt Clara, and Aunt Martha, while the skeleton of Daddy is housed upstairs in a bedroom and regularly bid "goodnight" by Virginia.

The bizarro family has become the stuff of local legend and are actively avoided by nearby townsfolk after Virginia trapped two trespassing kids and nearly did them in while playing her "spider" game, but the children escaped and spread the word that the Merrye house was to be avoided at all costs. Nonetheless, loyal and diligent Bruno shepherds and protects the family and manages to keep them and their secrets out of the spotlight of the general public and the authorities.

Into this warped, insular environment come cousins Emily (Carol Ohmart) and Peter (Quinn Redeker), who seek to boot the current residents and take possession of the house and land. Emily is a nasty bitch but her blonde good looks arouse unmistakable desire in Ralph, while the affable Peter wins over the girls with his friendliness. Along for the ride are Emily's assholish lawyer, Schlocker (Karl Schanzer), and his secretary, Ann (Mary Mitchel), and the outsiders make it clear that they plan to stay the night, which does not sit well with Bruno. Taking the hint, Ann asks Peter to drive her into town so she can stay in a motel instead, which leaves Emily and Schlocker with the Merryes. As the evening progresses, Bruno's control over the "children" drastically erodes as the creep factor escalates with acts of torture, murder, and rape, leading to an apocalyptic climax. 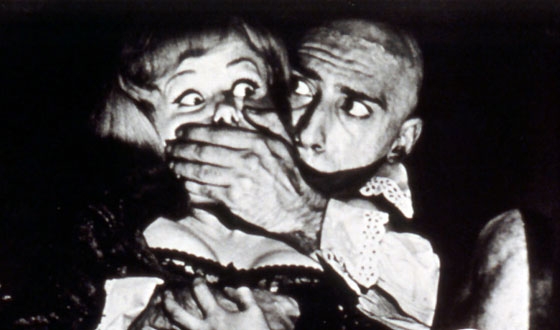 A throwback to the "old dark house" sub-genre, SPIDER BABY is an atmosphere-drenched little low-budgeter that may be the first of the "inbred weirdo family" flicks and stands as one of the weirdest films of the 1960's. Shot in 1964 but held in release-limbo thanks to its producers going bankrupt, the movie bears distinct echoes of Alfred Hitchcock's PSYCHO (1960) with its setting of a creepy old house on a hill, taxidermy birds as home decorations, outlining of familial insanity, infantilism, voyeurism, and disturbing sexuality. It also shares another aspect with Hitchcock's masterpiece, and that's the fact that it's the blackest of black comedies, though SPIDER BABY's humorous intent is far more blatant than PSYCHO's. Writer/director Jack Hill has frequently crafted exploitation features that managed the difficult balance of visceral content juxtaposed with utter, delirious cartoonish ludicrousness in such grindhouse classics as THE BIG DOLL HOUSE (1971), THE BIG BIRD CAGE (1972), COFFY (1973), FOXY BROWN (1974), SWITCHBLADE SISTERS (1975), and SORCERESS (1982), and that flavor is fully evident even in a work that came this early in his career. If taken at face value, the events of SPIDER BABY are downright unsettling, but the dialogue and performances bring to mind a 1960's sitcom like THE ADDAMS FAMILY or THE MUNSTERS if it had been crafted by Tobe Hooper while on a tequila and Gabapentin-fueled bender somewhere in a Tennessee Williams fever dream. 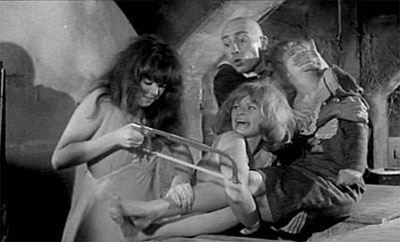 The comedy of bedlam.

Basically an eerie live-action cartoon, SPIDER BABY is not at all what one would expect from a film of its era, not even from a film within its genre, and it's something of a quirky little gem that deserves better recognition from dyed-in-the-wool horror enthusiasts as well as casuals. It's fun seeing Lon Chaney Jr. in a late-period performance that's actually good — he made far too many embarrassing turds after his 1940's heyday — , young Sid Haig is a hoot, and the dynamic between the sisters is a hell of a lot of mad fun. 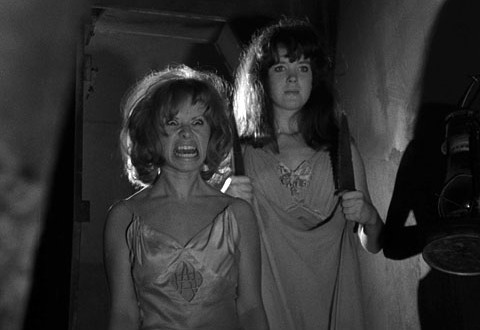 
Though obviously made on the cheap, SPIDER BABY makes the most of what it had to work with and comes up with a humble study of an ultra-dysfunctional family that initially fools us into accepting it as a lark, only to take a hard left into gore-free bleakness. Definitely worth checking out for its atypical flavor and also as a look at the unpolished days of the legendary Jack Hill. 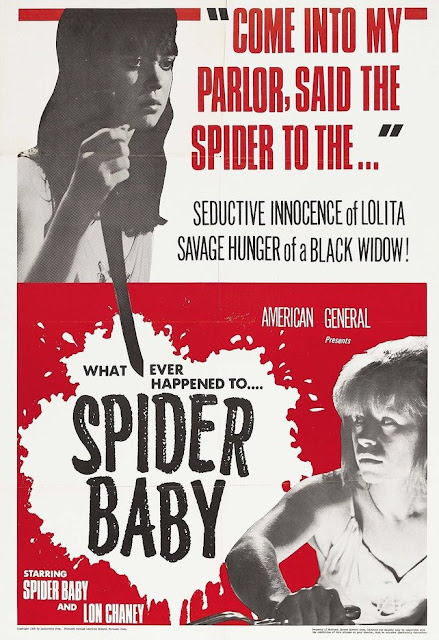