NOTE: This review originally ran when the movie opened, but I'm cheating and repeating it here for those who may have missed it. 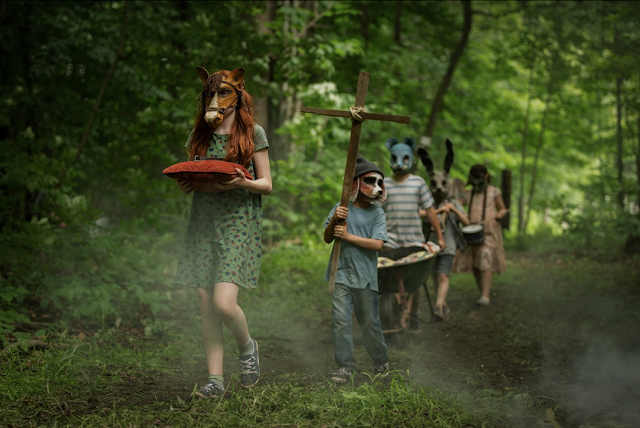 A tragic funeral procession...for a deceased beloved pet, or for the movie?

I just saw the latest adaptation of PET SEMATARY and, in the immortal words of Johnny Rotten, "Ever get the feeling you've been cheated?" I freely admit that PET SEMATARY is hands down my favorite Stephen King novel and that I was never a fan of the 1989 adaptation, which to me looked and felt like a cheap made-for-TV movie, so after the superb recent remake of IT, I approached the new PET SEMATARY with hope.

WARNING: FROM HERE ON, SPOILERS FOLLOW!!!
Less than a half-hour into the film, groups of people got up and walked out, and the exodus continued throughout. During the last half-hour, there were numerous audience exclamations of "What???" and "What the fuck???" before things degenerated to outright booing. I even let fly with "This is some fucking bullshit!" which was met with "You said it, muthafukka!!!" When the film finally ended, I have never seen a movie theater's auditorium clear out so fast.

Anyone who can find enjoyment in this film has probably never gotten within ten miles of the source novel and what this adaptation did to it can be considered nothing less than a desecration, especially when taking its sequel-bait "zombie family" ending into account.