There are very good reasons to be afraid of the dark.

A year after a life-changing family tragedy, outdoorsy Sarah Shauna Macdonald), four old friends, and one newcomer, meet up in a North Carolina section of the Appalachian Mountains for a group spelunking excursion. Old friend Juno (Natalie Mendoza), who seeks to mend her relationship with Sarah after not being there during Sarah's period of grieving, takes the lead and guides the party into a cave (that she does not tell the rest of the group is unexplored), only for the passageway they've just passed through to collapse, effectively trapping them. Juno then comes clean about it being an unexplored cave, and because of that state of unchartedness, rescue is simply not going to happen. As the group presses on, they discover the equipment of a previous hiker and a painting on the cave wall that hints at an escape route. But this is a horror movie, so everything that can possibly go wrong with  their attempt at making their way out of the caves does, with serious injuries injuries, further disorientation in the blackness, and revelations about hidden depths of Sarah's tragedy are bad enough, but our protagonists are not alone in the gloom, and what lives down there is very nasty and very hungry...

From Neil Marshall, writer/director of the superlative werewolf film DOG SOLDIERS (which we will be getting to later this month), THE DESCENT is a very effective followup that makes the most of its dark and claustrophobic setting, and is at time nail-bitingly intense. Unfortunately, in-depth discussion of the plot's particulars would give away its many surprises, both emotional and visceral, so all I'll say is that it's genuinely good and worth your time. And it should also be noted that the American and U.K. cuts of the films have different endings, that I cannot discuss for aforementioned reasons, but given a choice between the two, go for the U.K. director's cut. 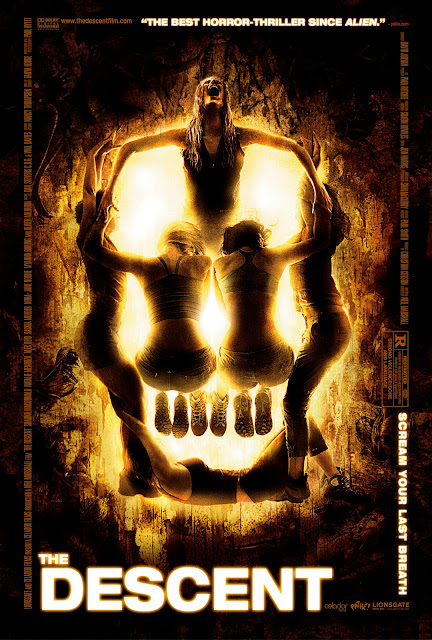