I just got back from Dragon Con in Atlanta and I have to say it was more fun than I have ever had at a con. I'm completely fucking exhausted but I will have some pics up as soon as possible at some time tomorrow. Mind you they'll just be teasers, but bear in mind that I'll soon have a huge gallery up. I have close to a thousand shots to weed through and muchg of it is spectacular, so bear with me for just a little while. There will also be scans of the celeb autographed pictures I snagged, and at this point I should mention that Traci Lords is a complete and utter sweetheartand I nominate her for either Catwoman or Harley Quinn in a Batman movie. No bullshit, she's a class act and has a great sense of humor. 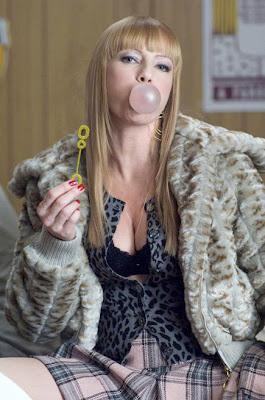 And to all the new friends I made at the con: I meant it when I said to keep in touch, especiallt my two new pals who have the experience of seeing Sonny Chiba in THE STREET FIGHTER ahead of them. I'm often known to bitch and moan about what a bunch of fucking douchebags a lot of the youth of today can be, but you guys gave me hope for the future.

Anyway, sleepytime for the Bunche. Back soon.
Posted by Bunche (pop culture ronin) at Monday, September 07, 2009

Cool. So glad it went well!