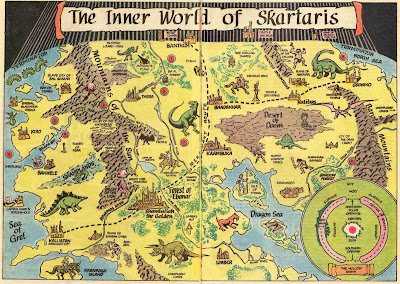 "Always expect the unexpected! In my world, one mistake can cost you your life!"
-Tara, explaining Rule Number One for survival in Skartaris.

In my nearly two decades of living in New York City and riding the underground MTA rails nearly every day, I have seen a lot of scary shit that at times justifies the casual visitor's paranoia about the subway being an underground death trap. When I was a child I was taught that when in New York City one must always be alert and ready for anything, a sentiment expressed quite eloquently in Mike Grell's barbarian adventure comics series THE WARLORD. Beautiful savage Tara firmly informs soon-to-be-hero Travis Morgan that one must "always expect the unexpected" in her subterranean world of Skartaris, a realm where one must hone their martial skills to a lteral razor's edge to fend off endless vicious foes and remain ever vigilant in the face of megalomaniacal madmen, crazed techno-wizards, deadly mythological threats and still extant carnivorous dinosaurs. Taking her warning to heart, I have thought back to when I first read it at the age of ten many times since then, but most often when confronted with random, unexpected and potentially dangerous loonies on the subway. I've personally run into several since 1990 and this morning I witnessed another disturbing textbook example that brought Tara's words to mind.

While riding to work on the R train, I was deeply engrossed in the book I was reading when a mother boarded the train with her brood of three rowdy children. Displaying the lack of interest in keeping her kids under control that I see all too often in this generation of parents, the woman took her seat and paid no attention while her Aryan youth brigade screamed, stood on seats, kicked the walls and otherwise made utter nuisances of themselves. After about ten minutes of this, the Hispanic gentleman unluckily seated next to the kids began to grow visibly irritated with their shenanigans when the car's doors opened and in walked a black gentleman of perhaps fifty years of age. At that point my well-honed "crazy sense" began to go off bigtime, and the black guy sat down directly across from the Hispanic fellow.

The black dude's eyes burned with an unexplained anger and his gaze fixed itself upon the man across from him. Suddenly, one of the kids lost his footing and fell onto the Hispanic guy, who reacted by saying, "Damn! Would you watch it?" That expletive provided the black guy with a perfect opening and he snarled, "Watch your mouth!" The stunned rider across from him asked "What???" and then the black guy let loose with an escalating litany of admonitions and undisguised threats that killed all other conversation on the train.

"That's right, you heard me!" he growled. "Don't you curse! Not in front of the kids!" The mother, finally awakening from her indifference, sensed that the man was crazy and corralled her brood to her side, thereafter moving them to the relative safety of a few seats away from the conflict. The Hispanic guy tried to brush it off by at first ignoring the irate passenger, but when the black guy kept clenching and unclenching his fists and trying to intimidate him for no good reason, the Hispanic guy made the mistake of responding with, "Oh, shut up and go sell some drugs."

He shouldn't have said that.

The train's passengers sat riveted as the black guy's face went through a series of contortions before he exploded at his target with, "I have a job! Had it for fifteen years!!! Who are you to judge me? I'm gonna..." He then noticed that there were children present and declared that he would not continue "out of respect for the kids." The Hispanic countered with more jibes at the man's obvious instability, punctuated with some finger-pointing, which only fueled the loony's anger. "Oh, just you wait!" shouted the crazy black man. "Just you wait until you get off the train! I'm gonna beat you down to the platform!!! Pointing a finger at me??? I'm gonna break that finger right off! You better hope the police are standing right there when we get off, 'cause I'm gonna beat. You. DOWN. Do you hear me???"

The guy radiated pure, insane hatred and stood up from his seat to go and hover above his target, his eyes practically staring a hole through the Hispanic guy's head. Still clenching and unclenching his fists, the guy towered over his intended victim, but he soon shifted position to the floor-to-ceiling pole and leaned against it, still continuing to stare. I'm sure none of my fellow travelers doubted the psycho's intention of beating the guy half to death when he disembarked, and I swear you could cut the tension with a dermatome blade. The Hispanic passenger ignored his would-be assailant, but it was clear from the beads of sweat on his forehead and the nervous drumming of his fingers upon his thighs that he realized he'd inadvertently bitten off more than he could chew, and it was only a matter of time until he had to leave the relative safety of the subway care.

I never saw that question answered because the train arrived at my stop, Times Square/42nd Street, and I had to get off. I'm glad I didn't get to see what may or may not have transpired, but I'll tell you this much: if there had been one of New York's Finest on the platform when I walked out, I would have sent him onto the train with a brief rundown of what was going on. The Hispanic guy's fear was one thing, but the rest of the passengers were just as nervous and uncomfortable, so maybe some police presence could have throw some water on the proceedings. But then again, this was the MTA subway, so one must always expect the unexpected...
Posted by Bunche (pop culture ronin) at Friday, September 25, 2009