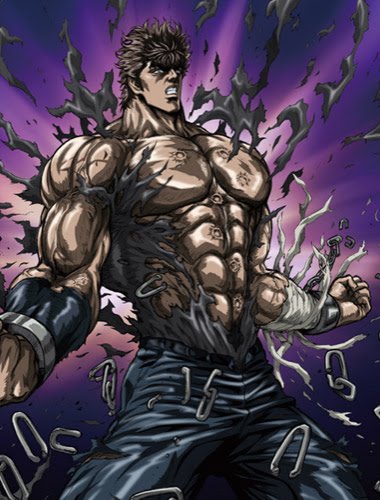 "Remember this...I will always be by your side...And I will fight. This is the will of the heavens."
-Kenshiro, 64th successor to the Hokuto Shinken art of combat 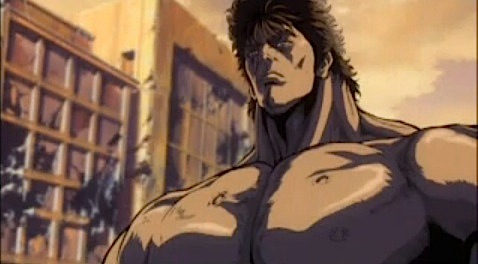 Kenshiro, the 64th successor of Hokuto Shinken, bestrides the wasteland.

Opening just after Raoh's defeat and Kenshiro's winning of his dying fiancee, Yuria, the story finds the reunited lovers engaging in what mythology scholars call a "sacred marriage," in which they pledge their love without the benefit of a sanctioned officiator. When their vows are made, the narrative goes back in time to just after Kenshiro has had his ass mercilessly kicked by Shin, a former friend and a master of the rival Nanto Seiken fighting art who also abducts Yuria for himself. That act is the event that galvanizes Ken into setting off on an odyssey of vengeance and virtually non-stop bloody martial arts carnage, and in all previous versions of the story it is from there that Ken comes out of the desert, scarred, pissed off and ready to make bad guys blow up real good using the power of his Hokuto Shinken kung fu. What happened to Kenshiro during the time immediately following his surviving the beatdown from Shin and the presumed year or so until the original narrative gets started had never previously been examined and that's just what this movie does, with some intriguing results.

Ken's near-dead and brutalized body is found in the post-apocalyptic wastes by a family of refugees, but moments after they find him and decide to get him some medical attention they're found and captured by a slave-trader and his well-armed minions. Normally such a threat would mean nothing to Ken and the villains would be explosively deceased in the blink of an eye, but he's hurt bad and has expended what little remained of his energy in slaying a pack of wolves who thought he'd be an easy meal. Thus is the weakened hero brought in for potential sale and locked up with the family (one of whom is a fifteen-year-old girl who wisely keeps her gender hidden), along with a mysterious old man who can barely walk. Though still healing, Ken is forced into gladiatorial combat against a gigantic opponent (a commonplace occurrence in this series since Day One), but rather than slay the brute Ken merely renders him unconscious. That sparks the old man to reveal that he is an elder of the Nanto Seiken school and Shin's former instructor, and he is deeply ashamed of his student and how Shin has become a murderous bastard who severed the old man's tendons. He confronts Kenshiro and points out Ken's naivetee and selfishness in not realizing that it is his destiny to use Hokuto Shinken to bring order to their lawless world and use his skills as the earthly avatar of the god of death to kill those who so obviously need killing. In the time-honored tradition of old school kung fu movies, Kenshiro stews over his fate and takes a hell of a long time reaching the obvious conclusion, but as an invading army under the command of a Nanto warrior overruns the city where our hero is imprisoned, Kenshiro finally accepts his role as a super-human righter of wrongs and things get martially spectacular. 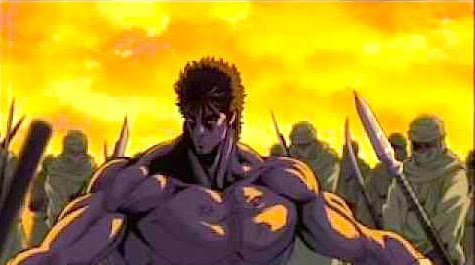 Kenshiro gets ready to make an entire army seriously dead.

HOKUTO NO KEN ZERO is certainly an improvement over every previous attempt at a series reboot but it does have a few problems, some of which will not be apparent to newcomers and I'm guessing that's probably who this movie is aimed at. Let's break down the good and the bad: 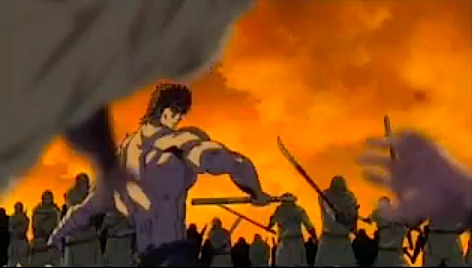 The "God of Death" gets down to business.

It's worth sitting through the entire film to get to the battle at the film's climax, in which Kenshiro single-handedly takes on Jugai's army, kills each and every one of them, and then takes the fight to their leader. The most striking bit involves Jugai advancing on Ken and finding himself in the midst of the famous Hokuto Hyakuretsu-ken technique — the "North Star Hundred Cracks Fist," which unleashes a hundred super-powered punches that essentially reduce an opponent's internal organs and bones to so much chutney — at which point the animators play with the frame's depth of field to produce a near-3-D effect in which Jugai is surrounded by fists that seem to occupy every direction. 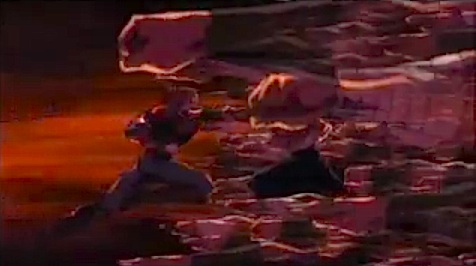 The fury of Hokuto Hyakurestu-Ken. Translation: "That's your ass."

That whole battle sequence gets underway as Kenshiro catches and redirects a hail of arrows right back at the archers who fired them, and that moment of balls-out awesomeness sent a chill up my spine as I yelled out, "YEAAAAAAAH!!!" Compounding this was the familiar "You Wa Shock" theme song from the old anime series, a triumph of early anime-metal that is deservedly a classic, and it made me feel like I hadn't felt about FIST OF THE NORTH STAR since the episode in 1986 where Ken won a hard-fought and brutal showdown with the phoenix-powered despot Souther. That's the feeling I keep hoping to recapture each time I check out a new FIST OF THE NORTH STAR installment, and I wish the current run had given me more than what amounts to perhaps five minutes of the kind of ass-whuppin' I long ago came to expect.

So if you're an old school fan like me, you could certainly do a lot worse than to check this out if you can get your hands on a subtitled copy (and the subs on the version I watched were the best I've ever seen done for FOTNS). It's more of a Shaw Brothers-style old school kung fu film in animated form than a balls-out bloodbath like back in the days, and that's definitely a step up from the turgid, unnecessary retconning seen in recent years. RECOMMENDED (for those who care). 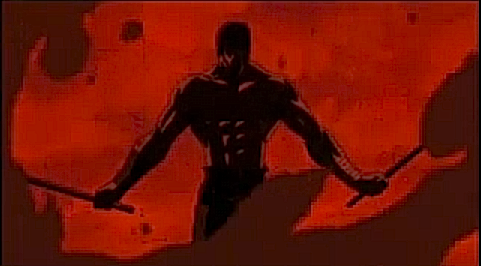 Labels: FIST OF THE NORTH STAR, FLICK YOU