THE UNARGUABLE MAGIC OF HORRENDOUS TATTOOS 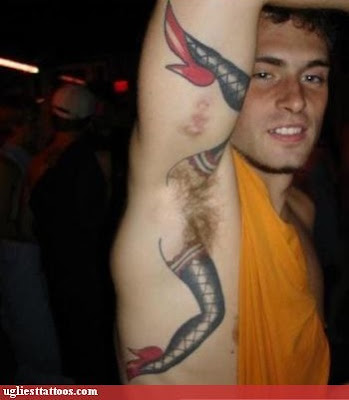 My buddy Kenny alerted me to a site called UGLIEST TATTOOS: A GALLERY OF REGRETS , and I have to say I'm delighted to see it more than lives up to its name. Many are poorly executed, poorly thought out, or just plain bad, but then there are the ones that are just plain conceptually beyond the pale. Some of the tats on display will make you ask exactly what the fuck, if anything, was going through then minds of the people who willingly had them inked into their hides, like for instance Wolverine heroically riding My Little Pony, 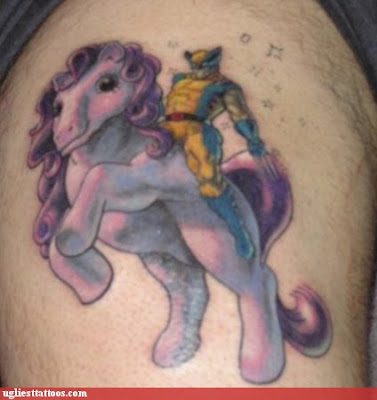 or the horror of what appears to be the Pillsbury Dough Boy raping Little Debbie atop a snack cake: 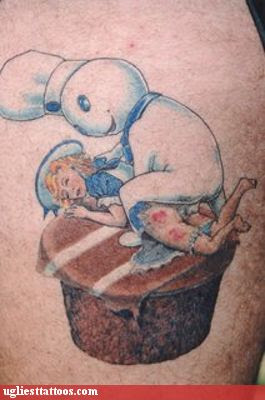 I don't know what's most disturbing about this, the bruises on Little Debbie's thigh and buttcheek or Poppin' Fresh's eerie facial expression and doughy balls.

But then we have the following, a piece of work that just plain stopped me in my tracks: 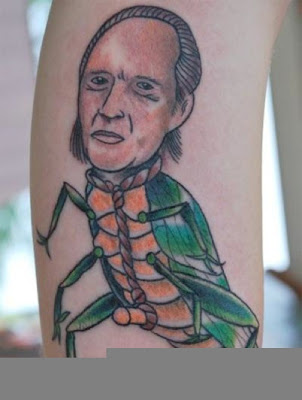 It took me a moment to suss out what it was, but how does one come up with a bad caricature of the recently deceased David Carradine atop the body of a grasshopper (get it?) that has an auto-erotic strangulation setup tied around its neck and engorged Johnson? This is a rare instance of something that is simultaneously incredibly offensive and utterly brilliant, which, come to think of it, is the perfect way to describe much of the site's content. Check it out immediately, but bear in mind that it's in no way safe for work.
Posted by Bunche (pop culture ronin) at Monday, September 28, 2009

I think those bruises on Deb's thighs might be blemishes on an existentialist's arm. Not sure which thought's more unsettling.

My friend, collaborator and tattoo artist Bryan works in a studio where the inside of the bathroom door is papered with images from this site. It's enough to make you claw your eyes out. The owner, Stu, makes a point of maintaining an "artist's discretion" policy: if the artist thinks the image is stupid, grotesque, potentially dangerous, or something the client will wake up the next morning and go "What the FUCK was I thinking?" the artist can talk the client out of it or decline the work. He keeps the ugly tats on the wall partially for laughs and partly to remind his artists that some people are dull-stone stupid, especially when they come looking for ink.