THE HAUNTED WORLD OF EL SUPERBEASTO (2009) 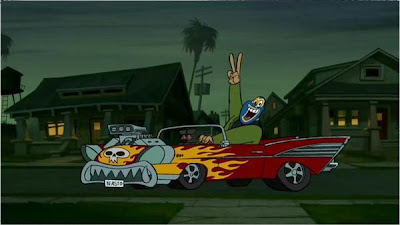 I've said many times before that while I may think Rob Zombie can't direct a turd out of his own asshole, let alone a movie, I can't quite bring myself to despise the guy and what he does because it's so obvious that he knows and really loves all the same horror, sci-fi and exploitation movies that I do. The guy's heart is definitely in the right place, but his feature films to date have been either highly derivative or remakes or a combination of the two, and I swore that his animated feature, THE HAUNTED WORLD OF EL SUPERBEASTO, would be the make-or-break movie when it came to me ever wasting time or money on another one of his efforts. Well, now I've seen THE HAUNTED WORLD OF EL SUPERBEASTO and I have to say I found it incredibly frustrating. Not an outright piece of shit like the three previous Zombie films I've seen (I refused to see HALLOWEEN 2), but very frustrating for a number of reasons.

Taking place in a world where monsters and other denizens of horror/sci-fi/exploitation films exist as a facet of everyday life, the film follows the adventures of El Superbeasto, a comedic take on the masked Mexican wrestling heroes of yore like El Santo and the Blue Demon. He's an obnoxious, sex-obsessed egomaniac whose glory days in the ring are apparently over, and he currently spends his time starring in porno movies when not hanging out at the monster-infested Haunted Palace nightclub. A little of El Superbeasto goes a very long way and after about five minutes I'd already had enough of him; he just isn't that funny, and the wearing of a luchador mask does not automatically guarantee laughs (did no one learn from NACHO LIBRE?). Luckily we have his sexy crimefighting sister, Suzi X, on hand to hold our interest. 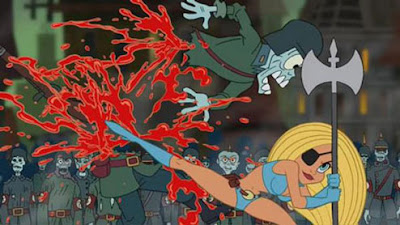 Amusingly voiced by Sheri Moon, Suzi X is a ribald adventuress who is an over-the-top sendup of scantily-clad action movie heroines, and with her love/lust-struck robot sidekick/vehicle Murray (Brian Posehn), she steals the movie and renders El Superbeasto pretty much superfluous. If not for him being hornily motivated to rescue the ultra-ghetto, big-titted and topless exotic Dancer Velvet Von Black (Rosario Dawson in full-on-and-foul "No he di'in't" mode) from becoming the bride of Dr. Satan (Paul Giamatti), The movie could have (and should have) been a solo Suzi X adventure. Anyway, here's all you really need to know about THE HAUNTED WORLD OF EL SUPERBEASTO: 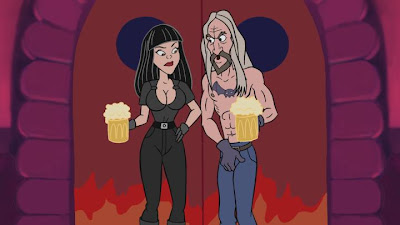 The brief and thoroughly welcome return of Tura Satana as Varla from FASTER, PUSSYCAT! KILL! KILL! 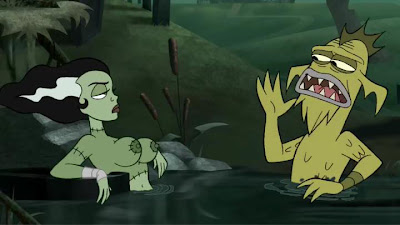 Think about it for a minute: a horny amphibious humanoid eating the pussy of a woman constructed from the sundry parts of random dead chicks? Now that's comedy!
As previously stated, Suzi X is the real treasure here and when she's not onscreen the movie suffers for her absence. Apparently a number of animators from Spumco were on hand for this one and even if one didn't know that for a fact, the film reeks of their stylistic influence and looks like an especially dirty, mega-profane and ultra-violent episode of THE REN & STIMPY SHOW. I don't know about you, but I loved that show when it was firing on all cylinders and traces of that insane energy can be found here and there during THE HAUNTED WORLD OF EL SUPERBEASTO's running time, but those flashes of brilliance are tantalizingly few and make the viewer realize just how good this movie could have been if a little more polish had gone into the script instead of the filmmakers being content with a half-baked cult movie lampoon. When you have a protagonist whose non-appeal nearly overwhelms the movie, that's a big problem, one endlessly compounded with gags that fall flat from start to finish, especially an ill-advised bit at the end where El Superbeasto performs (lip-synchs, actually) Loverboy's "Working for the Weekend." 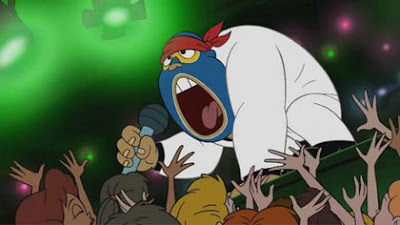 El Superbeasto belts out Loverboy's "Working for the Weekend." Why?
Why did any of the writers think having him do that oh-so-eighties chestnut would be in any way funny? I assure you that it isn't. And speaking as a person who hated all of the previous Rob Zombie movies I've seen, I wasn't as tickled as I was supposed to be by the inclusion of an animated version of Zombie's would-be psycho icon Captain Spaulding. 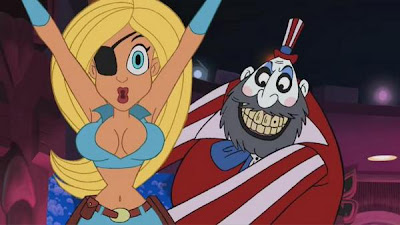 HOUSE OF 1000 CORPSES and THE DEVIL'S REJECTS psycho Captain Spaulding gets animated and does his lecherous thing.

Spaulding wasn't much of a presence when compared to such creations as Leatherface, Michael Meyers, or even Jason Voorhees, but I guess this was just about the only chance Zombie would get to put the character onscreen in animated form, voiced by his live-action counterpart, exploitation movie veteran Sid Haig. Meh, whatever...

The bottom line on THE HAUNTED WORLD OF EL SUPERBEASTO is that it's not an agonizing way to kill some time until something better comes along, but don't go in expecting the crazed heights promised by the trailers. Oh, and at the end there's a title card promising another adventure of El Superbeasto "next summer," so let's hope the filmmakers learn some valuable lessons from this film's misses. (I'm not holding my breath).
Posted by Bunche (pop culture ronin) at Tuesday, September 22, 2009

I'm pretty sure the only reason Rob Zombie makes movies is to give his extremely untalented but extremely large-chested wife--that would be Sheri Moon--work.

I'm with you on Sheri Moon, but she was perfect for Suzi X, an over-the-top cartoon like herself.