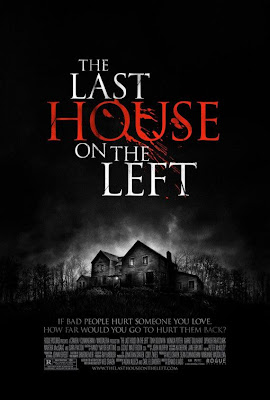 One of the things that I frequently rail against is the pussification of the United States of America that has gone on unchecked since, by my estimation, the 1980's, and a particularly vexing aspect of this is the softening of the horror movie genre. We now live in the era of PG-13 horror flicks, the majority of which aren't as scary as some of the dumps I've taken, and the R-rated fare is no better. Everything is either incredibly limp in terms of scares or else is a remake/"re-imagining" of a horror flick with recognizable name value, and it's that latter category that irks me most. Remakes in general tend to be lazy and unnecessary, offering little, if anything, that can add to or improve upon the original, and in today's conservative/wimpified climate a remake of the legendarily foul THE LAST HOUSE ON THE LEFT would not seem to be something that would work. 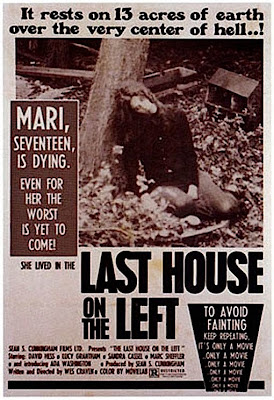 Theatrical poster for the 1972 original version.
The 1972 LAST HOUSE ON THE LEFT was (and still is) a very nasty work of cinema that tells the story of what happens when two relatively innocent girls from the Connecticut suburbs try to score some weed before a concert in NYC and end up horribly victimized by a quartet of sadistic psychos. The poor girls are beaten, kidnapped, forced to have lesbian sex with each other for the amusement of their captors (neither one is a lesbian), one is made to piss her pants at knife-point, and both are raped, one being partially dismembered and disemboweled before being stabbed to death, while the other has the head sadist's name carved into her chest with a knife before being shot and left for dead, floating in the nearby lake. The irony is that this was one of the girls' seventeenth birthday and it obviously goes tragically wrong, with the majority of the girls' degradation taking place practically across the street from the home of the Birthday Girl's parents, the titular last house on the left. 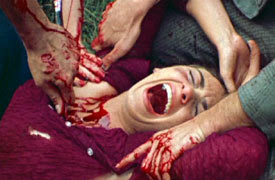 A very bad day for the Birthday Girl.
With their car broken down, the quartet of evildoers seek refuge at the parents' house, unaware that they are the mom and dad of one of the girls they just totally debased and murdered. Once the parents find their daughter's body and discover blood-soaked clothes among the bad guys' possessions, they put two and two together and go on a vicious and animalistic spree of righteous vengeance, making absolutely certain that the villains will never rise again. The mom memorably bites off one assailant's cock and spits said member into the lake, while dad's understandable ferocity is given vent with the aid of a handy chainsaw, and those bits of revenge serve as the icing on a grubby cinematic cake that leaves most viewers feeling the need for a long shower.

The 1972 THE LAST HOUSE ON THE LEFT is grubby, primitively-made and quite amateurish to look at, but its artistic incompetence lends it an undeniable immediacy and intimate dragging of the viewer into its all-too-identifiable horrors, bringing to life the worst of the late-1960's/early-1970's parental scare tactic stories of what can happen if you hitchhike or try to score drugs to carnage-filled life. The four criminals resonated with a Manson Family-like vibe that still scared the shit out of the American public barely three years after the heinous Tate-LaBianca murders, and seemed more real than than any previous bogey-man previously brought to the screen because for all we knew creeps like these could be lurking anywhere, ready to do unspeakable things to any one of us at any random time. It's some powerful, nasty-assed shit and the passing of time has done nothing to diminish its impact.

So why bring forth a remake some thirty-seven years after the fact, especially in a cinematic climate that is needlessly conservative and takes no chances?

The new THE LAST HOUSE ON THE LEFT is a marked improvement over the original in terms of overall cinematic competence, but that's really all the remake has to distinguish itself. The new filmmakers understand that a camera is more than a magic box that one points at things and trusts to luck that the images captured may cohere into a watchable whole, and consequently the violence and sadism comes off as far more tame and artificial than the incredible viciousness of the original. This story is not meant to be in any way genteel yet that's what it's been rendered, even in the unrated version which should have received a "hard R" at worst. The original's squirm-inducing set pieces are what gave it its undeniable power, love it or hate it, and the current unrated version probably had to trim a couple of nasty stabbings to one of the girls' torsos and shortening the rape in the woods. It's interesting to note that, awful though it is, the rape sequence is handled as tastefully as something like that can be handled, affording little to no nudity to the camera and sure-to-be-disappointed viewers who get off on that sort of thing. But the worst that the original had to offer is completely excised; the ultra-creepy scene where the girls are forced to have sex with each other is completely ignored and the famous oral castration is nowhere to be found (a damned shame, that), likewise when dad goes nuts and offs the lead villain with the aforementioned chainsaw. Instead we get an effective use of a garbage disposal and a ridiculous bit where a microwave oven is used as a murder weapon. 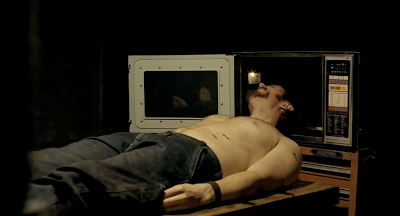 So what we get with this remake/re-imagining of THE LAST HOUSE ON THE LEFT is a tiger with its fangs drawn and its clawed paws amputated, left there to writhe about on the ground as a piteous travesty of its once-fearsome self. The sole reason the new version is worth seeing for old school horror/exploitation fans is so they can witness a textbook example of the slow death of the American horror genre. Maybe it will someday resurrect itself, but it looks like the weak tea version is all we'll be getting for the foreseeable future.
Posted by Bunche (pop culture ronin) at Wednesday, September 02, 2009