The fun I had at the 2009 Dragon Con set in motion memories of other very enjoyable cons and in no time I recalled the 2005 Bristol Con in the U.K., and thinking of a highlight from that show reminded me of some original art I recently obtained but had neglected to share with you, my dear Vaulties. I'll get to the new additions shortly, but first a little history (some of you may have already read this intro, but bear with me).

While at that the aforementioned Bristol Con I got to meet many of the luminaries of the British comics contingent, but the biggest thrill for me was meeting John M. Burns, a seriously talented illustrator whose work I first saw in a stunning painted issue of ESPERS back in the eighties. The guy's equally amazing in pen and ink or when working in color, as is proven in this gorgeous piece: 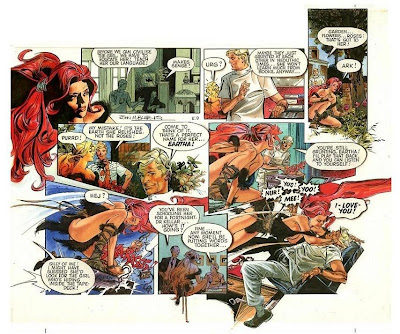 Burns is a veteran in the British comics world and his work can currently be found in 2000 A.D.'s popular NIKOLAI DANTE series, gracing the page with the welcome feel of classical painted illustration. 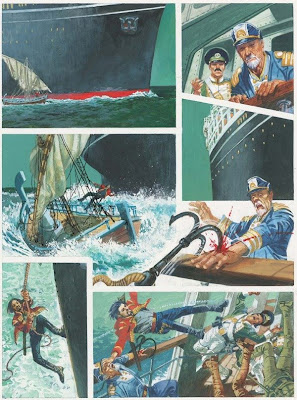 A sample of Burns' work on NIKOLAI DANTE.
But my interest in Burns really gets going when I remember that he worked on the newspaper strip of MODESTY BLAISE. One of the classics of British comics and adventure strips in general, MODESTY BLAISE has a huge following, but for some reason Burns' run on the series was not well received by the readers and he was let go, something about which he is famously not amused, so much so that in the Bristol Con souvenir book it was flatly suggested that attendees avoid bringing up MODESTY BLAISE if they met Burns, and that's where this story gets interesting.

When I found Burns' table I perused his originals for sale, fully-painted pages from NIKOLAI DANTE, the awesome ESPERS issue, a few MODESTY BLAISE black and white dailies, and other sundry items, all of which were well out of my range of affordability, and soon struck up conversation with the master illustrator. After the usual pleasantries I decided to throw caution to the wind and I launched into an impassioned tirade on how his ousting from MODESTY BLAISE was a load of bullshit, as well as making mention of how he was the guest who I was most excited to meet after flying over from the Colonies, and when I was done I asked Burns if he would be willing to draw the strip's protagonists, Modesty Blaise and Willie Garvin, in my sketchbook. He thought it over for a moment and said that he'd do it because I was quite clearly on his side of the matter. He then rummaged through his stack of art in search of reference on characters he hadn't drawn in nearly thirty years, found suitable pages to work from, and commenced drawing. I thanked him and watched him work for a few moments before leaving him to his task, and when I strolled by again five minutes later there was a small crowd of older fans whispering excitedly among themselves, thrilled to witness the nigh-impossible sight of John M. Burns drawing characters that the convention's own programme had declared verboten. The crowd continued to grow, and when Burns was finished there was much oohing and aahing as he handed me this magnificent sketch: 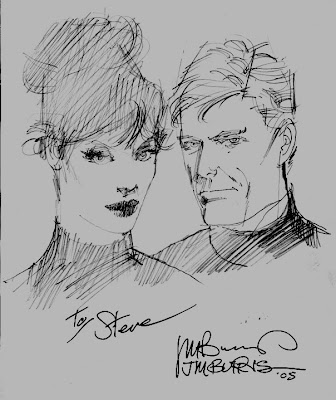 When I returned from that trip I showed this to my fellow hardcore Modesty Blaise fan, Jessica, and when she saw it she nearly shat a sports utility vehicle.

Anyway, when all was said and done I got Mr. Burns' card and perused a stack of Burns' originals and took notes as the numbers on the MODESTY BLAISE daily strips he had available, in case there ever came a day when I could actually afford to purchase any of them. They were not what I would call expensive, especially considering the cult fame of the strip and also after having seen how much his American contemporaries charge, but I was barely two months out of a two-year stint of unemployment and just didn't have the scratch to spend on pretty pictures.

Skip ahead to April of 2009 and me reading through the two Titan Books editions featuring the entirety of Burns' run on MODESTY BLAISE. It was now nearly four years after my encounter with Burns in Bristol and I was a bit more financially secure, and reading his run prompted me to look up the numbers of the strips he had for sale and contact him with a buyer's inquiry. When i called him up I was pleased to find he had most of the strips I'd jotted down, plus one of my favorite pages from the issue of ESPERS that I loved, so I asked him how much the seven MODESTY BLAISE dailies and the ESPERS page would run me. He got back to me with a figure that I thought simply had to be wrong because he couldn't possibly be letting them go for such a bargain, but, no, I'd read it right. I could afford the lot, but it meant seriously girding my loins and deferring a couple of of financial responsibilities, but I didn't regret it because when would i ever get another such opportunity?

I scrimped and saved for about two months and eventually sent off the payment in two installments via international money order, and literally three days after he received the final payment, Burns sent me the art in a large and sturdy cardboard tube. Here are the treasures that were within (double-click on them to see them large): 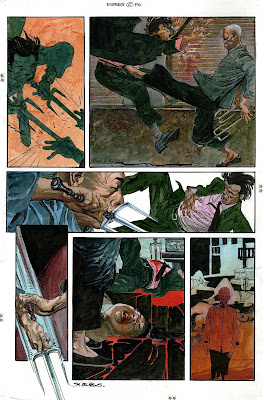 This incredible page is from ESPERS #6. Here we have the psychic martial artist/assassin-for-hire Lo Chong, utterly laying waste to a pack of modern day ninja and walking off after the deed is done, lamenting how not one of them offered him the slightest challenge. When I read this twenty-some-odd years ago I had no Idea who artist John M. Burns was, but this issue and especially this sequence made me a fan for life. And imagine my disappointment when ESPERS #6 turned out to be the last issue before it got canceled; it was the first chapter in what would have been a multi-issue arc that pitted Lo Chong and a number of other evil espers against the good guy espers, but the story would not be resurrected for another several years, not until the series was revived under the marvel/Epic banner as INTERFACE, with a different (and vastly inferior) artist.

One of seven MODESTY BLAISE dailies by John M. Burns. My fascination with the dangerous world of Modesty Blaise has been gone over quite a bit — and could easily be accessed if Blogger ever gets around to restoring my Modesty Blaise blog, among the others that they took down for no god reason — but I love this one for reasons fully understood by fans of the series and its characters: here we have Modesty flat-out commanding her highly skilled and incredibly deadly right hand man, the one and only Willie Garvin, not to kill a thug who tried to murder her, while their good friend, Sir Gerald Tarrant of the British Secret Service, looks on. It's impossible to explain Modesty and Willie's relationship is so little space, but let it suffice to say that while they are not lovers they are definitely soulmates, one perfectly completing the other, so Willie finds the idea of any form of disrespect to his "princess" offensive to begin with, so anyone who would try to physically harm or kill her might as well just dig a ditch for himself and get the fuck in once Willie gets wind of such bullshit.

Our heroine in Injun garb. Be still, my heart...

What's not to like about a daily featuring the sheer absurdity of one of the world's most badassed women dressed in fancy dress Injun gear while chasing a greased pig?

The daily concluding the whole Injun/greased pig thing and giving us Miss Blaise in the shower.

Ya just gotta love this one featuring Modesty kicking a deserving motherfucker's ass with her signature weapon, the Kongo.

Here's a daily featuring all three of the major characters: Modesty, Willie Garvin, and Sir Gerald Tarrant. I love the horse, and also how it's a rare quiet moment for the characters.

A lovely print of Zetari, one of John M. Burns' beautifully designed characters. Burns threw this one in for free because he's a swell guy. Whatta mensch!
Posted by Bunche (pop culture ronin) at Saturday, September 12, 2009

Wow! How do I not know about this guy?

"Nearly shat a Sports Utility Vehicle" is an awesome line.