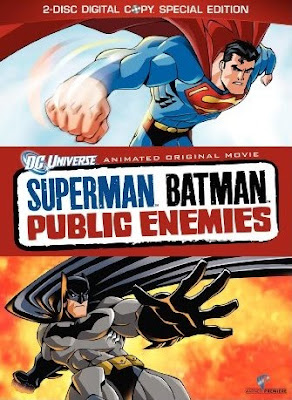 The latest of the DC Comics animated DVD features adapts the Geoff Loeb and Ed McGuiness graphic novel with all the superheroic bombast and action one would expect from the studio, and the icing on the cake is the return of Kevin Conroy, Tim Daly and Clancy Brown to the characters they voiced to lasting effect in the BATMAN and SUPERMAN animated series starting in the 1990's. 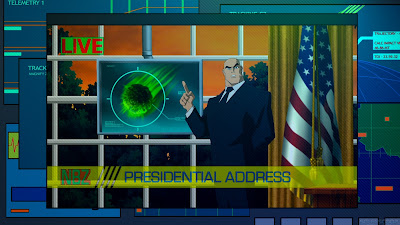 "I am not a crook": President Lex Luthor.
The story revolves around what happens when Lex Luthor is elected President of the United States and how that level of power allows him to take his intimate war with the Man of Steel to new levels of very personal assholism, basically framing him for murder and issuing a billion-dollar bounty for his arrest (yeah, good luck with that!). 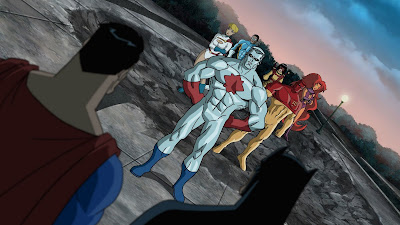 Whatcha gonna do when they come for you?
Of course Batman's got Superman's back as government-deployed supers seek to corral the Kryptonian — a hardcore-badassed team comprised of Captain Atom, Power Girl, Starfire, Black Lightning, Katana and Major Force — and a legion of bad guys seek to collect on Luthor's bounty, so there's lots of ass-whuppin' to be had. 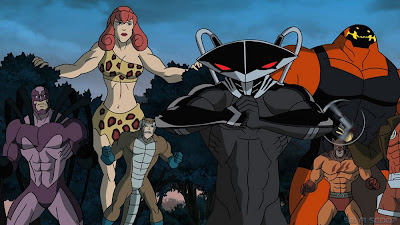 Just a smattering of the film's shitload of bad guys!
I mean there's the Silver Banshee, 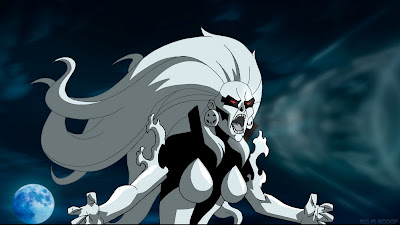 Mongul, Solomon Grundy, Giganta, Cat-Man, Deadshot, Black Manta, Gorilla Grodd, Captain Cold and Mister Freeze, Nightshade, and even Lady Shiva, for fuck's sake, and I never expected to see her in animated form! And that's not even all of them! 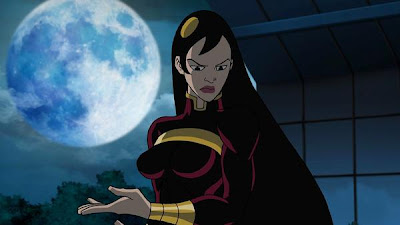 The all-too-briefly-seen awesomeness of Lady Shiva.
Oh, and there's also the small matter of a continent-sized Kryptonite asteroid on a collision course with Earth that Superman could easily make short work of (provided he was in a lead suit for obvious reasons, which is addressed) but Luthor's ego won't let him consider that option, instead insisting that his calculations for blowing it out of the sky with a barrage of missiles is foolproof...

The story's solid, action-packed like a mofo and briskly paced, and the fact that they were able to get Kevin Conroy (Batman), Tim Daly (Superman) and Clancy Brown (Lex Luthor) back in the recording studio at the same time was nothing short of a minor miracle. As far as I'm concerned, Kevin Conroy should be held on lifetime retainer by Warner Brothers because let's face it, the guy simply is the Batman. I can't speak for anyone else out there, but I have not been able to read a Batman comic since 1992 without hearing his voice coming out of the character's mouth. Same for Clancy Brown as Lex Luthor, and Luthor has many moments in which to shine his vile light, especially during a truly douche-chill-inducing moment involving Amanda Waller of Suicide Squad renown. (And for the record, I like Tim Daly's understated/reserved Superman, but he is not the voice I hear in my head for Clark.)

Though using Ed McGuiness's designs as a visual springboard, the animation designers fixed his tendency to draw his characters shorter and more squat than is to my liking, so it works quite well visually speaking (although Superman looks a bit too much like Li'l Abner for my liking). Power girl is also in it and drawn to look like a big-eyed Tex Avery/Preston Blair-style heroine, and her famously-big tits are also refreshingly present (and realistically dealt with when she goes to seek the help of a thirteen-year-old boy genius). Plus the film's violent as hell and at one point, during a DAILY SHOW parody, compares, in bleeped-out fashion, the public's acceptance of Lex luthor as president to how some members of the general public "also like getting fucked in the ass with a red hot poker." Lastly, it's short, clocking in at barely over an hour in length, so there's not a slow moment to be had. 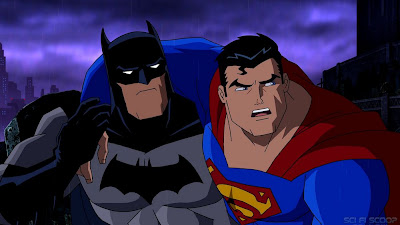 Overall I'd give it a 4 out of a possible 5, and out of the whole growing stable of DC animated features I'd rate this just behind the Wonder Woman and Green Lantern entries as the most fun of the lot.
Posted by Bunche (pop culture ronin) at Friday, September 25, 2009

I was kind of disappointed in this one. I thought there were episodes of justice league that did much better fan service in the "holy shit, it's (obscure hero or villain)." And although I have not read the comics this story is based on, I thought the Lex story arch from the end of the Justice League series was way more interesting. Although seeing him grope Amanda Waller towards the end made it worth sitting through the movie.