A FIST OF THE NORTH STAR FRIDAY EXTRA: MY LITTLE (POST-APOCALYPTIC) PONY

Ever since getting into the whole FIST OF THE NORTH STAR thing back in 1985 I've wanted a good toy of the hero's eldest brother, arch-nemesis, and one of the most badassed motherfuckers in the entire history of manga/anime, Raoh the Conqueror. Since those bygone days there have been a number of toys of the character, most of which sucked, but a few of which were pretty good, including one found in Revoltech's ongoing and truly excellent line of super-articulated FOTNS. But there had never been a truly excellent — or even good, if truth be told — toy of Raoh astride his massive and deadly war horse, Kokuoh ("Black King"). Until now, that is. Check out this good shit: 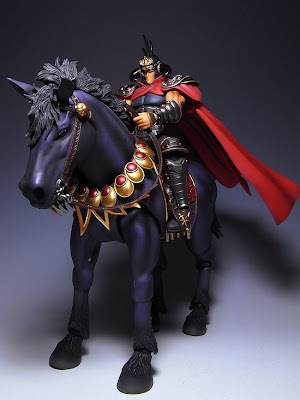 My Little Pony can kiss my ass: Raoh and Kokuoh by Revoltech.
This is Revoltech's completely fucking awesome Raoh astride the mighty Kokuoh, and the only way it could be improved was if it were just a tad bigger. But it's in scale with the rest of the Revoltech FOTNS toys, so it's just fine. Both figures feature the major-league super-articulation that makes these toys a joy for collectors who like to pose their dollies, er, action figures in exciting and manly poses reflecting the manga/anime's badassery. Kokuoh has fully-poseable legs with moving hooves that adjust to several interesting angles, and he even has articulation in his mane, tail, and ears.

When I first saw the ad for the toy I was pissed off because I knew I had to have it, but I had already bought Revoltech's earlier Raoh. Thinking it over I figured "whatever," and accepted what I perceived as an unavoidable ripoff. Then I received the figure — via my always reliable and vigilant pal Adrian's source — and my opinion was utterly changed. 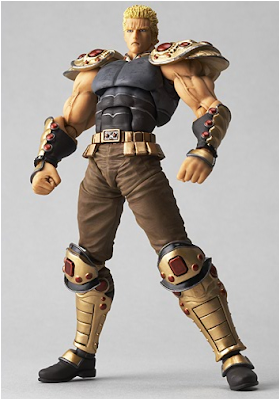 The original Revoltech Raoh figure, sans helmet and cape.
You see, the first Revoltech Raoh was a dead-on likeness of the character and came with all of his expected gear, including helmet and cape, but the version paired in the set with the horse offers a more "dark" and ominous re-paint that's perfect for him when he's out ravaging the post-nuclear landscape and generally doing evil things. The black helmet really makes it. 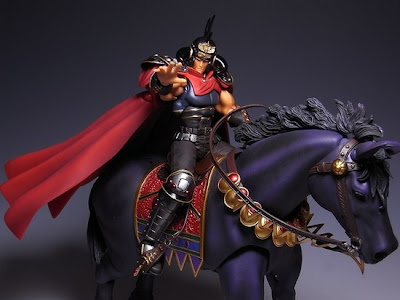 Raoh's cape is also now a relatively huge, three-piece item that is also articulated to fan out or up and down to allow for yet more dynamic posing. All in all, featuring literally a few dozen parts, including four different sets of hands and extra shoulder pads, plus a container to put it in so it doesn't get misplaced, this toy is a masterpiece and an absolute must for FIST OF THE NORTH STAR-minded toy collectors. 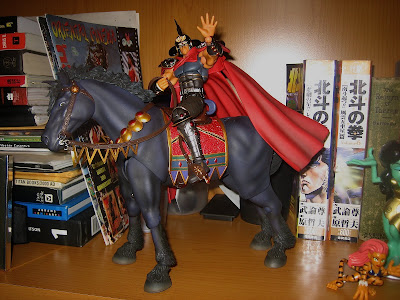 Raoh and Kokuoh, perched on my workspace's bookshelf, neither taking one iota of shit.
Posted by Bunche (pop culture ronin) at Friday, September 18, 2009

Labels: FIST OF THE NORTH STAR, GEEKIN' OUT