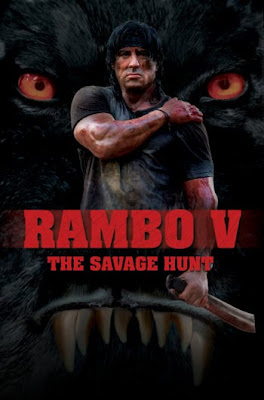 The details are sketchy and I've read conflicting descriptions of the plot, but a movie about Rambo where's the hunter and not the hunted, conscripted to take down some government-created half-human super-soldier experiment that's gotten loose and is killing everything in its path? I'm there on opening night, muthafukkas!!! After RAMBO: FIRST BLOOD PART II (1985) I've considered Rambo to be something of a superhero, so now the filmmakers have finally embraced that concept for real and it's about goddamned time.

And Suzi, considering how much fun we had at the last one, I'm dragging your fine, green-eyed, mouth-wateringly-endowed self along for the ride!
Posted by Bunche (pop culture ronin) at Monday, September 14, 2009