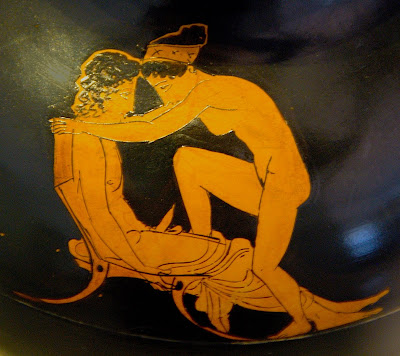 My dear friend Stephanie is one of my favorite human beings and quite a saucy bit of half-British totty with whom I share an number of common interests, including music, comics, and giant monsters. We also share a fascination with most things sex-related, and some of Steph's painted works speak from that aspect of her personality. She recently sent me a jpeg of one of her recent works, and I dug it for obvious reasons. 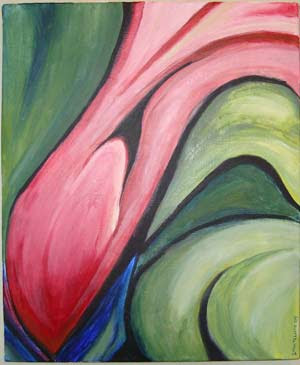 "Pistil" by Stephanie Ratcliffe.
Channeling her inner Georgia O'Keefe, Steph made with the always appealing fusion of the labial with a lovely garden specimen, and I don't care what anyone says: I will never, ever get sick of such pussy paintings. Vaginal petals are beautiful and endlessly fascinating to me, and when I am not finding myself up close and personal with a living specimen of the enthralling human version I am quite happy to find intellectual comfort in the painted depiction of such. Yes, O'Keefe was the undisputed master of the vadge canvas, but Steph is certainly no slouch by my way of thinking. Her painting is straight-up art and easily construed as pornographic, but I bask in all its lippy glory and see no trace of obscenity in it whatsoever. But then again I am a famously outspoken advocate of most things related to the sweet and mighty pussy so I'm an easy sell, but be that as it may I would defend this work in any court of law as definitely possessing "redeeming social importance," something that obscene material apparently does not feature, as determined by the Supreme Court in the cases of Roth v. United States and Alberts v. Canada (both 1957).

Which is a long-winded way of saying, "Stephanie, I really like your pussy painting. Well done!"
Posted by Bunche (pop culture ronin) at Sunday, September 27, 2009

Sonja Kodiak Wilder said...
This comment has been removed by a blog administrator.
8:59 AM

Thanks for the great compliment, and the great blog, Bunche! I regard your opinions highly, so it meant a lot to me. Kodiak loves the painting too, and wants me to make a similar one for him.

To see more of my art, you can visit http://stephanieratcliffe.blogspot.com
or even better, come visit my art auction at Everything Goes Book Cafe http://www.etgstores.com/bookcafe/. I want to sell it all!