We're taking a one-day detour from movie and teevee reviews in order for me to briefly touch on some of the sacred texts — sacred to me, anyway — that got me started down the path of the serious monster kid.

My earliest memories of enjoying horror films are of watching California's iteration of CREATURE FEATURES in the early 1970's, the one hosted by the legendary Bob Wilkins. 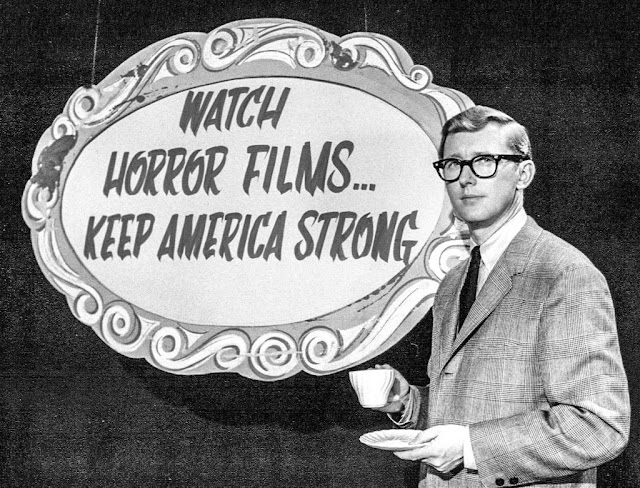 Between the ages of five and seven, I never missed an installment, thus garnering my introduction to horror as both an art form and a a genre. The films ranged from classics — such as my first exposure to Hammer films was an unforgettable screening of KISS OF THE VAMPIRE, under its KISS OF EVIL title — to straight-up monster movies — THE MONSTER THAT CHALLENGED THE WORLD, whose title creature scared the shit out of me when I was six and which still holds up today — to outright dreck — BILLY THE KID VERSUS DRACULA, anyone? — and I was rabid for all of it.

But my love affair with CREATURE FEATURES (and life in general) came to an abrupt end when my family relocated from the San Francisco area to the hostile confines of 1972-era Southern Connecticut, Westport, to be specific, and it was there that I first encountered unrelenting racism and bigotry, from many of my 2nd grade peers and also from their parents and other adults, plus the move only serving to escalate the growing martial tensions of my parents, so my first few years there very lonely indeed. Thus, I spent my first several years in Westport rather isolated, opting to bury myself in drawing, sculpting, reading, and TV as a means of escaping the hostile environments of school and the nuptial battlefield at home. Unfortunately, at the time the Tri-State Area's TV for kids was mostly crap, featuring a limited amount of weekday afternoon cartoons, reruns of THE ADVENTURES OF SUPERMAN, BATMAN, and LOST IN SPACE, but little else (this was just before the legendary 4:30 MOVIE became a thing), and TV showcases for my kinds of movie were limited to the weekends, so I sated my appetite with the occasional monster mag like FAMOUS MONSTERS OF FILMLAND (that I would eventually write for, thirty-some-odd years later) and THE MONSTER TIMES (their poster issues being treasured favorites that decorated my bedroom walls), but what really got me going was finding out that there were books out there that delved deep into the lore and history of horror and horror movies.

Believe it or not, my elementary school's Scholastic book fairs often offered up books on horror movies and monsters, along with others on legends and histories of monsters and witchcraft (one "Knowledge Through Color" book on the history of witchcraft in Europe being intended for an adult audience, but that was somehow offered to eager 3rd-graders like me, despite its contents being wildly inappropriate for our innocent consumption), so I of course snagged every one that I could. I also got my hands on such material at book stores and via finds at tag sales, so I had plenty to read. That said, here are the four foundational books on horror movies that served me well as a child, and all but one of which I have bought again as sometimes-pricey collector's items to ensure that my library remains intact long after my original copies of the books in questions fell apart after being loved to death.

Up first is AN ILLUSTRATED HISTORY OF THE HORROR FILM (1967) by Carlos Clarens. 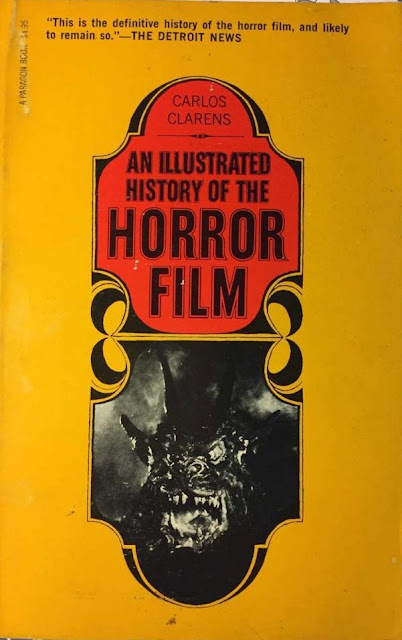 Cover for the paperback edition.

I have no recollection of where I obtained this book, but I do remember bringing it along with me on our family trip to Portugal and Madrid when I was eight. (An unexpectedly wise move, as it offered me escape from witnessing the volatile final nails being driven into my parents' Chernobyl of a marriage.) Though generously bearing a middle section loaded with black-and-white photos, this was a scholarly book for grownups that went deep on horror movies from the birth of cinema up through the mid-1960's, and it taking the genre seriously as an art form was much appreciated by this budding film geek. I had that paperback copy until sometime during my college years, when is simply vanished into the ether, so last year I tracked down a mint-condition hardcover first edition off of eBay. Its information has been rendered obsolete by the passage of time and the availability of a cornucopia of knowledge on the subject being available for free via the internet, but it will always have a cherished pace on my shelf.

MONSTER FROM THE MOVIES (1972) by Thomas G. Ayleworth was another travel companion book, and it provided me with the groundwork for my knowledge of all the major movie monsters, their films, and the myths and legends that inspired their creation. 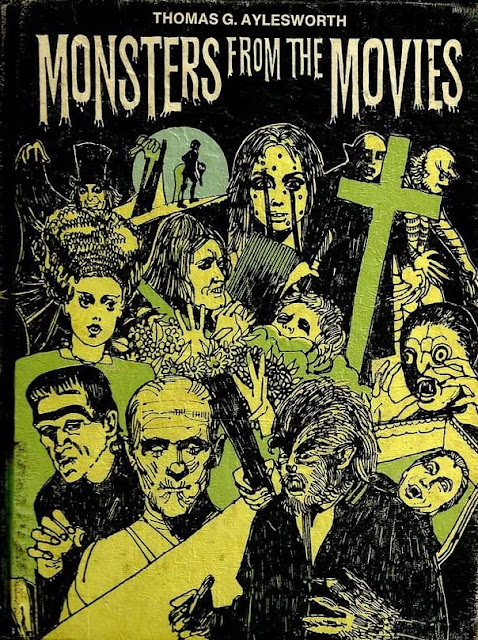 This one I got at a Scholastic book fair and while wholly appropriate for younger readers, it was well-researched, illustrated with photographs, very informative, and was the first time I remember encountering the word "semen" while having no idea what it meant. (In a section detailing the components required for the creation of an homunculus.) My paperback copy was read endlessly between 1974 and 1979, even after my mother, in a characteristic display of her serial disregard for my personal treasures, left an open blue Sharpie on its cover. The ink drained out and stained the cover, but it also seeped through the cover into the pages, thus destroying the book. Another one that re-obtained via eBay, this time in hardcover.

A PICTORIAL HISTORY OF HORROR MOVIES (1973) by Denis Gifford. 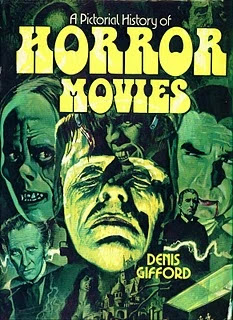 This one was ubiquitous among the coffee table movie books found in bookstores of the early 1970's, and it's easily my favorite of the lot. It's a large-scale hardcover that features enough historical and production info the please any true fan, but where it really shines is in the fact that it is positively loaded to the gills with well-chosen photos, in atmospheric black-and-white and glossy color. I went through two copies of this one, and have since bought a number of copies off of eBay as gifts for like-minded enthusiasts. In fact, I recently bought myself another copy via eBay, as my previous one got loaned out to a "friend" who vanished without a trace, having absconded with several other treasures. If you can find this at an affordable price and in good condition, this is the one to get. 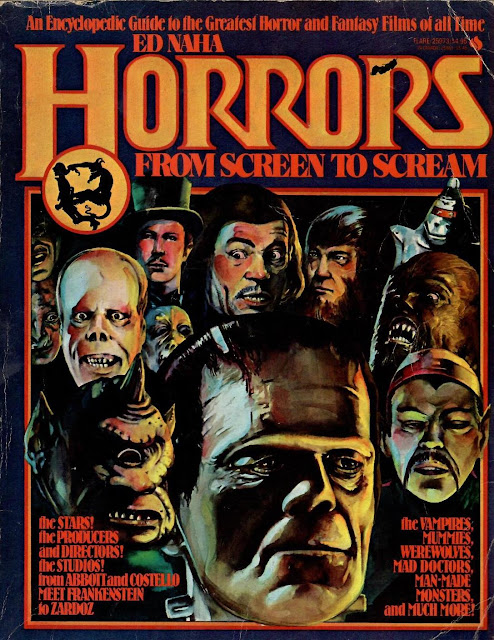 This volume is a comprehensive A-Z of horror movies and their stars, and it held me enthralled as I absorbed its information. It proved invaluable when referencing titles spotted in local TV listings, and part of the fun of it was that it read as though the author was speaking to you as a like-minded pal. His assessments of the films were quite candid, and in some places hilarious. My first exposure to the legendary THE GIANT CLAW described the titular alien bird as being of the species "woodenus puppetus," which was letting it off lightly. Printed on relatively cheap paper, this one was not built to stand up to the love received from repeat consultation, so this will be the next formative-period tome that I will replace. Mine fell apart nearly four decades ago.

Bottom line, you can;t go wrong with any of these, though I would advise giving A PICTORIAL HISTORY OF HORROR FILMS a miss, as it is outdated and also because finding a copy in solid shape can get expensive.