The great majin Arakatsuma: Fuck around with a mountain deity and find out.

An evil chamberlain, Ōdate Samanosuke (Ryūtarō Gomi), murders the local royal family, all expect for the son and daughter who are spirited away by Kogenta (Jun Fujimaki), a retainer loyal to their dead parents, and takes over as lord of the area. His rule is a cruel one, with his men enforcing a decree that worship of and rituals to appease the local majin (demon god) Arakatsuma are now forbidden. A priestess of the majin, Shinobu (Otome Tsukimiya), issues a grave warning against this, but Samanosuke and his thugs refuse to heed it...

The retainer takes the children up into the mountains, to a forgotten temple in taboo territory, forgotten by all but the children's aunt. The area is marked by a gigantic statue of the local mountain deity that sealed the majin ages ago, so the locals avoid the place like the plague, so the children are raised at the temple without fear of discovery. They grow to young adulthood while the villagers endure the sadistic torments of Samanosuke, including brutal torture and forcing every man in the village into slave labor. Knowing that this abuse is going on, Kogenta ventures into the town in an attempt to round up any surviving retainers and overthrow the vicious despot, but he is immediately captured and held captive. The young prince, Tadafumi (Yoshihiko Aoyama), gets word of Kogenta's capture and attempts a rescue, but he too is trapped. With our heroes slated for execution, Shinobu attempts to sway the evil lord with a warning that his actions will earn him the curse of the mountain god if he doesn't knock it off. Samanosuke, or course, ignores her advice and has her killed, after which he orders the statue of the majin demolished. As she dies, Shinobu curses Samanosuke to a merciless and brutal death, underscored with a warning that if he goes forward with his plan to destroy the majin, Arakatsuma will awaken, and he really, REALLY does not want that...

A work crew is dispatched up the mountain to destroy the najin, and on their way they discover Tadafumi's sister, Kozasa (Miwa Takada), whom they force to guide them to the statue. Once there they drive a chisel into its forehead, but they run for their lives when that action causes blood to drip from its stone forehead. The earth then opens up and takes the desecrators into its depths. A desperate Kozasa gets down on her knees and prays ti the majin, begging it to save her brother and Kogenta from the evil warlord.

You can guess what happens next.

Released by Daiei, the company responsible for the Gamera giant monster series (the main competition to Toho's more upscale monster efforts), DAIMAJIN played on TV in th U.S. as MAJIN: MONSTER OF TERROR, and it did not go over well with American fans of daikaiju cinema back in the days. New York's beloved 4:30 MOVIE weekday showcase would regularly run "Monster Week" (a surefire ratings winner), and I, of course, never missed it. It was there that I got my formative education on giant monster movies, so I watched whatever they chose to feature, The rosters were dominated by Godzilla and friends, or Gamera entries, but every now and then something else would slip in, like THE X FROM OUTER SPACE (1967) or MONSTER FROM A PREHISTORIC PLANET (1967). Among those oddities was MAJIN, and back then I found it boring and not worth sitting through for its payoff. (I think I was maybe nine when I first saw it.) Apparently I was not alone in that assessment, as MAJIN was one of the rare 4:30 MOVIE entries that only played once. (The crappy dubbed print and the commercial interruptions did not help.)

Skip ahead to around the year 2002. I forget where I was when I found it, but I got my hands on a handsome boxed set of all three Majin films — turned out there was a trilogy — in gorgeous widescreen, subtitled transfers, and watching DAIMAJIN again in that format and from the perspective of a 37-year-old who in the intervening years had gotten deep into samurai period dramas, it was a whole other experience than what I saw on THE 4:30 MOVIE.

First and foremost, DAIMAJIN is a straight-up samurai period piece that's also a textbook example of the particular flavor of storytelling that I call "the Japanese slow burn." If one goes into it blind, it's yet another of the many, many jidai geka (period piece) films that were being cranked out at the time, and as such its elements are nothing fans of the genre have not seen before. What sets it apart is the inclusion of the majin as a seemingly incongruous plot element, and that inclusion makes the film. The samurai melodrama that takes up 4/5 of the film is okay, but it absolutely sets the stage for when the majin  comes to life and goes on a most righteous rampage. When active, the formerly relatively featureless statue takes on well-defined detail and an unforgettable scowling visage whose effectiveness is compounded by the actor's human eyes being visible through the makeup. It's a truly startling effect. 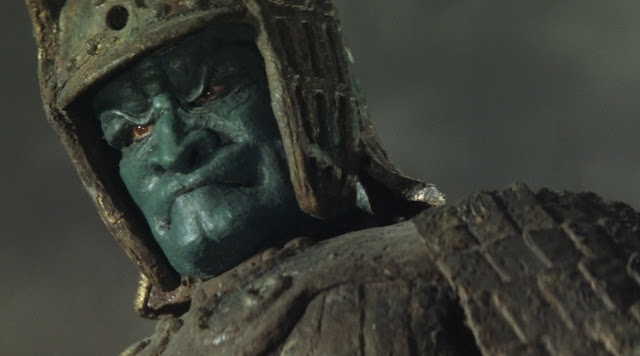 The stone face of righteous justice.

As previously stated, DAIMAJIN is a straight-up samurai drama that suddenly becomes a kaiju movie during the last reel. The tonal shift is admittedly jarring, but that's what lends the sequence much of its power. And powerful it is, as the now living — and very pissed-off — majin implacably stomps its way through the village, wreaking unstoppable destruction on the village and the lord and his men. The good guys survive, but they are kind of forgotten amidst the stunning destruction and top-notch suitmation acting. The majin is one of the most believably-realized kaiju in all of cinema, and his rampage is ably aided and abetted by gorgeous widescreen cinematography and an evocative soundtrack by Toho/Godzilla stalwart Akira Ifukube, the John Williams of the kaiju genre. From out of nowhere, DAIMAJIN turns into a spectacle of righteous carnage, an epic display of justice being meted out by the gods, and it is wondrous and terrifying to behold.

The film was followed by two swiftly-released sequels — RETURN OF DAIMAJIN and DAIMAJIN STRIKES AGAIN, with all three released within the space of nine months (Daiei cranked out movies cheap and quick, as painfully evidenced by the Gamera series — but neither followup was as solid as the first entry. The only reason to see them is for the stunning special effects, including a sequence where the majin parts a river, a la the part of the Red Sea in THE TEN COMMANDMENTS (1956). The effects in the Daimajin films are beyond criticism, as they are among the top tier of the entire genre, so find the sequels' effects system online if you are intrigued.

DAIMAJIN, as previously noted, is a slow burn with a spectacular payoff, but it is definitely not for all tastes, or even for all kaiju fans. It moves at a glacial pace and not every viewer is into samurai dram without tons of swordfights and spewing arterial spray, so individual mileage may vary. That said, I recommend it for those who can handle its pacing. 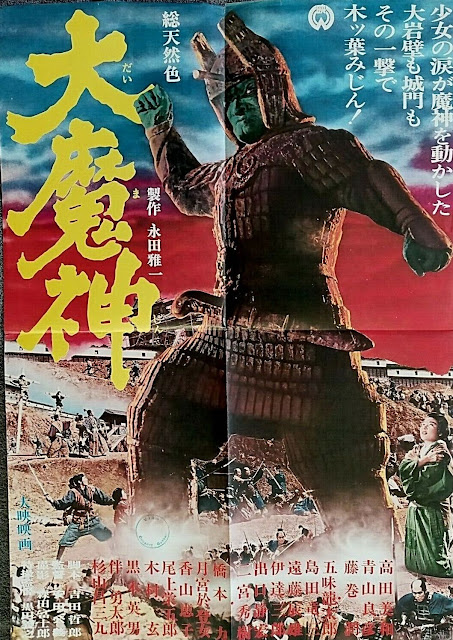 Poster for the Japanese theatrical release.