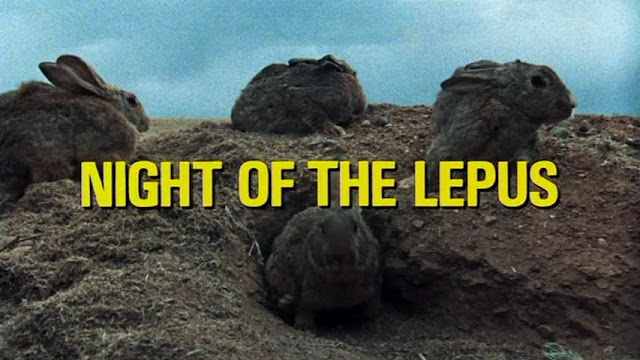 The only thing missing here is Count Floyd trying to convince us that this film is in any way scary.

I first saw NIGHT OF THE LEPUS when I was around 10 years old, when it ran on THE CBS LATE MOVIE on a Friday night. The ads for it obscured exactly what the story's threat was, so going in I was quite intrigued, so when I finally got to see exactly what the ravening horde of man-eating monsters was comprised of, I was utterly gobsmacked. In a throwback to 1950's thrillers about scientific testing gone wrong, what we get here are giant rabbits on the rampage, and it's a race against time to destroy them before their legendary reproductive capabilities lead to the world being overrun by fluffy-tailed bringers of death.

Yes, you read that right. It's a horror movie about GIANT FUCKING BUNNIES. 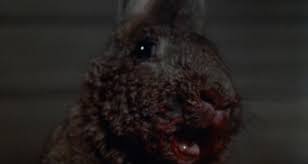 George A. Romero's PETER COTTONTAIL. (If only...)

Though played utterly straight, no amount of earnestness can compensate for the simple fact that rabbits just are not scary. Even when placed in scaled-down sets and shot with over-cranked film to give them the impression of scale and ponderousness, bunnies are just too damned cute to elicit anything other than "Awwwww..." from the audience, even when their adorable little mouths are smeared with strawberry syrup to simulate the blood of their victims. 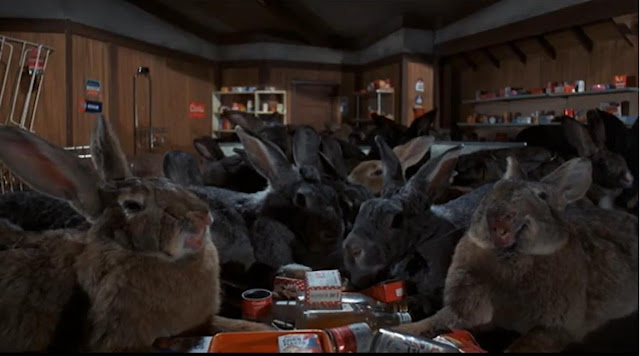 Can your heart and mind withstand such pure, unbridled terror???

Yeah, it's every bit as ridiculous as it looks and sounds, but the real tragedy here is that it's not even so bad that it's good. It's dull and mediocre, with the proceedings only barely livened-up by scenes of slow-mo herds of rabbits hopping through miniature sets. Seriously, who in their right mind thought this was a good idea, and who basically set their money on fire by greenlighting its production? It's simply beyind my powers of comprehension.

Worth seeing just so you can say that you've seen "the one about the killer bunnies, but that's about it. If you want to see a genuinely terrifying and savage film about rabbits, I strongly advise sitting through the masterpiece of kindertrauma that is WATERSHIP DOWN (1978). 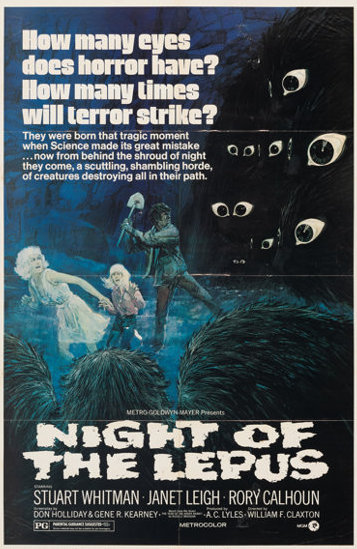 Poster from the theatrical release. Note how it gives no indication of the fact that it's actually about killer fucking bunnies.