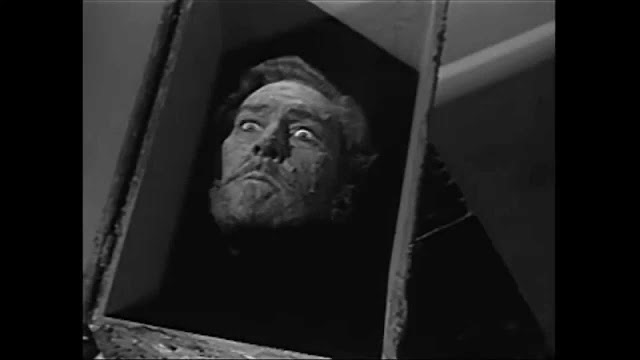 Free after over 400 years: the undying severed head of a Satanic sorcerer. 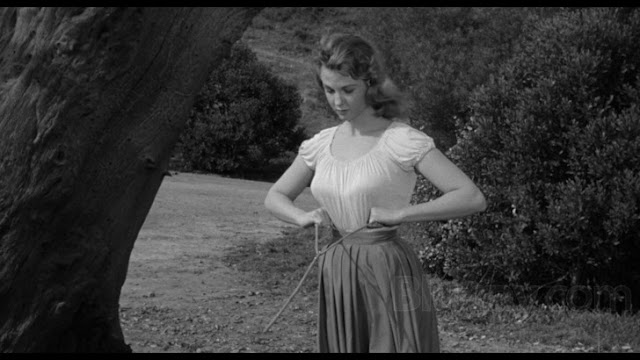 Sweet young water witch Jessica (Carolyn Kearney): about to unleash something that should have stayed buried.

She warns the shady ranch hand and the hulking, low-minded chore boy not to dig in a certain area, as it sends her evil-detection sense into overdrive. The old woman who owns the ranch tells them to ignore the the young witch's warning, and all present, including a trio of city slicker guests at the ranch, scoff at the girls powers, despite witnessing several concrete examples that her gifts are the irrefutable real deal. The dig unearths what the ranch owner presumes to be a treasure chest filled with gold, and she is eager to open it, but one of the guests, an historian and archaeologist, suggests that she be patient and let him go to the city to bring in an expert to verify what it is and what it's worth, as it could be priceless if unopened before proper appraisal. She takes his advice and, despite Jessica's warnings and clearly-demonstrated escalating terror, has the ranch hands move the chest into the main house, where they are assigned to guard it overnight. Once the ranch owner is asleep, the shady cowboy sleazily peeps on Jessica as she prepares for bed, after which he sneaks into the ranch owner's bedroom, steals the key to the room where the chest is being kept, and convinces the dimwitted hand — who's basically Lenny from OF MICE AND MEN — to open the chest. He leaves the hand to his task and the returns t Jessica's cabin, this time with more on his mind than peeping. Thankfully, Jessica's power keeps her awake and alert while the rapey cowboy is near, but he has a change of heart and returns ti the main house. Once there, he finds that the slow-witted ranch hand hs succeeded in opening the chest, but instead of gold he finds a living severed head that mind-controls him into being its physically imposing slave. When the cowboy tries to fight the enthralled ranch hand, he is killed, and the head sends his slave on a quest to find his body, his head held like a lantern by his slave. 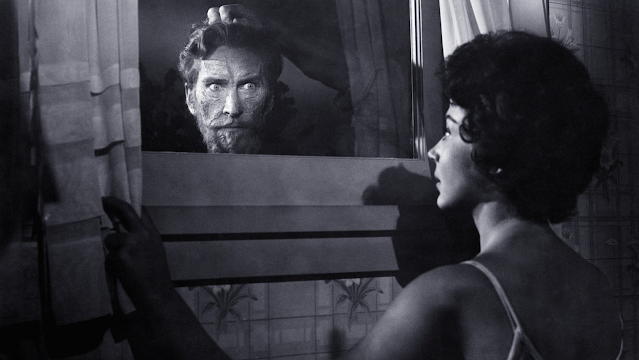 When she asked for head, this is not what she had in mind.
When the historian returns with the expert and they find the chest opened and its contents gone, they nonetheless have the chest itself to examine, and once they have used chemical to free the chest's lid of accumulated crud, its inscription states that the chest contains the severed head if Gideon Drew, a satanic sorcerer who was executed 400 years prior. The full details are revealed in a flashback dream had by Jessica, and it explains that Drew possessed "the evil eye," specifically a gaze that bends minds ti his nefarious will. His persecutors keep him at bay with a fleur de lis pendant, a pendant found in the present day and now worn by Jessica, thus making her impervious to Drew's control. However, nothing goes right, and it's only a matter of time before the warlock reunites with his body and all hell breaks loose... 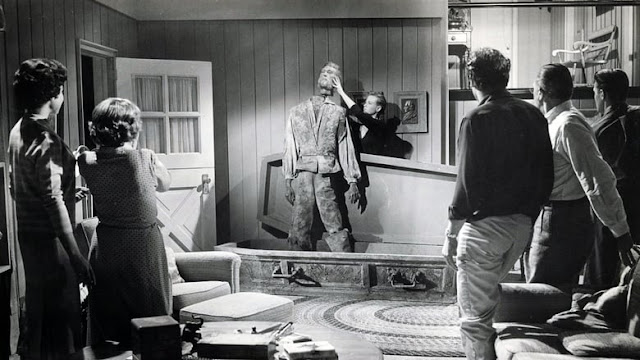 Reunited, and it feels so good?
THE THING THAT COULDN'T DIE came along after the run of classic Universal horror films ended — for all intents and purposes, the classic Universal era ended with THE CREATURE FROM THE BLACK LAGOON (1954) and, arguably, its two lesser sequels — so it it often overlooked when the Universal horror classics are discussed. That's kind of a shame because it's something of a hidden gem, its rather abrupt ending notwithstanding. Yeah, it's got a big guy lumbering around while brandishing a severed head that strongly resembles Edward Mulhare, but it does not have a fantastical creature like a werewolf, a man-made monster, or an amphibious missing link toe make it as memorable as its predecessors. That said, the basic plot is solid, and it would have befitted from a bigger budget and a tad more care in its production. Still, its a fun little shocker when taken as the B-picture that it is, and it in no way deserved the lambasting it got as fodder for MYSTERY SCIENCE THEATER 3000 in that show's eighth season. 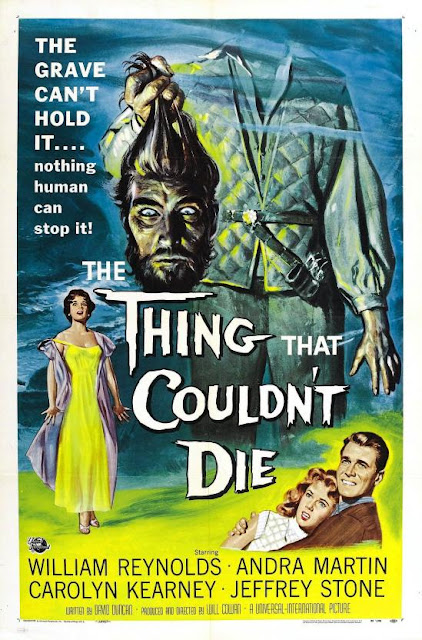