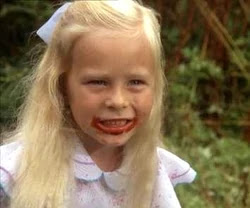 With a title like this, the main thrust of the story is given away from the get-go, but what makes it interesting is the how and why of the proceedings. In a nutshell:

While on their way to visit at a friend's country house, a couple's car breaks down in the middle of nowhere, so they seek the nearest house so they can call for help. They happen upon a big house run by a kindly old woman (Diana Dors) who states that she and her husband are Hungarian immigrants, and that they have eight kids — eight very eerie kids — all fathered by her husband via different mothers. There's the expected strange behavior by all of the residents, and when the couple are locked in for the night (so they "don't get a scare"), the wife sees the face of what is obviously a werewolf at the bedroom window (which is two stories up). The husband attempts to climb down and investigate (???) but he falls, rendering himself unconscious. Meanwhile, the old lady and the kids open the bedroom door and let in the werewolf, much to the terror of the wife, and they patiently wait outside while the wife is raped by the lycanthrope. Fade to black... We then see the husband in the hospital, just waking from a concussion and with a broken wrist. The wife remembers nothing after the car breaking down, but she is now sexually voracious and enjoys eating fillets of raw meat.

The husband goes away for a few weeks on a business trip, and when he returns his wife tells him she's pregnant. Once that news is conveyed, she refuses all further advances from her husband while the fetus grows and an unnatural rate. Not long after, she leaves without notice, and her husband, who remembers that weird night at the house but had written it off as a concussion dream, tails her in the direction of the house, but cannot find the secluded off-road. While looking for it, he encounters a friendly woodsman who mentions that he is originally from Hungary. The husband grills him about the house and the weird family, and too late he realizes just who he's chatting with. The woodsman explains that make wolves mate with many females and sire many cubs, and that's what's happened to the wife. Unfortunately, human women who are used as broodmares for werewolves do not survive the birth, but the cubs live on...

Anyway, it was the first time I've seen a werewolf transform and kill a victim with a woodsman's axe. 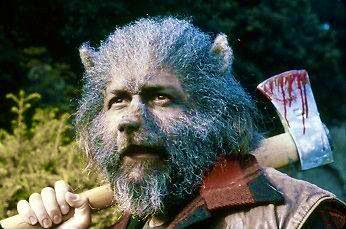 Not something one sees every day.
Posted by Bunche (pop culture ronin) at Sunday, October 03, 2021