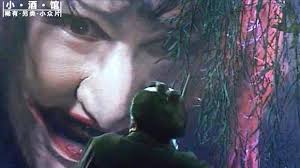 "There are things man just can't measure or understand in this world." — mysterious samurai Yasutaro

In feudal Japan, a wealthy land owner plots to tear down an obscure shrine to the Yokai (spirits) that's precious to the local community, along with an occupied tenement house. And as if that's not enough evil for one story, another wealthy evil bastard also plans to extort an old man into turning over his nubile daughter as a sex slave in order to pay off a debt in which the deed to tenement house was put up as collateral. When a mysterious samurai interferes in their business and manages to obtain the money to cover the old man's debt, he gives the money to the daughter, who in turn gives it to her father. Pops goes to the lord to pay off the debt, but the scumbag lord has the old man murdered, the deed retrieved, and the girl held prisoner to await the rape that will inaugurate her new existence as a sex slave. In the midst of all of this, much is made of the 100 Yokai Tales, a series of old scary stories that serve to illustrate what happens when one is foolish enough to disregard the ancient curse-preventing rituals and disrespect the supernatural forces of the Yokai. We see one of these stories told by a professional storyteller during an entertainment for the land owner, and at the end a ritual to ward off any curses from the Yokai is to be performed. 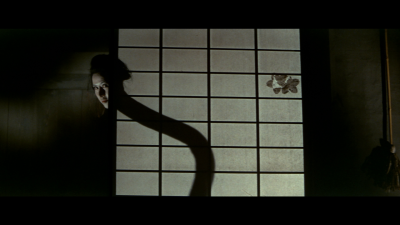 In a formally-told ghost story, a Rokurokubi, the famous long-necked female Yokai of Japanese folklore, teaches two arrogant fishermen a lethal lesson after they violate a river that they were warned not to fish from.

The evil land owner instead declares that such a ritual is not necessary, as it it nothing more than an old superstition, and dismisses the storyteller. Once he has departed, large sums of money are exchanged among the corrupt, the tenement building is slated for immediate demolition even though the residents refuse to leave, an innocent girl is about to be violated, and the temple to the Yokai demolished. Once the temple comes down, the corrupt come to understand in no uncertain terms what "Fuck around and find out" means when offending the Yokai...

ONE HUNDRED YOKAI TALES, known in the West as YOKAI MONSTERS: ONE HUNDRED MONSTERS, is the first in a trilogy of 1960's Yokai flicks, and in some corners of fandom is considered a classic. That said, it is very much a product of its native culture, and the way that its story is told is geared toward that culture and an intimate familiarity with its folklore and the creatures found therein. Japanese horror, especially older versions of such, is often about the slowest of slow burns, and that is very mcuh what we get here. Also, if one goes into this movie expecting the hundred monsters of the tile and seeming menagerie of same seen on the poster, the viewer, perhaps even the viewer in its country and time of origin, is in likely to be disappointed. The movie attempts a fusion of the standard samurai drama in which the wealthy and powerful oppress the local peasantry until a righteous hero, often a ronin with a mysterious past, shows up to mete out well-deserved justice to rat bastards with his swift and deadly sword skills, and roughly 99% of the flick is devoted to such period piece drama. It's okay as such, but it's nothing we have not seen a million times before. The only new wrinkle is the Yokai element, and that part is sparse at most. We get the aforementioned ghost story, and a Kasa-obake, a Yokai that's a living umbrella paying visits to and playing with the mentally-challenged adult son of the guy who wants the girl as a sex slave. The umbrella monster's antics with the slow-witted man-child is like something out of a kiddie movie and does not work at all amid all of the far more serious drama going on around it.

The Kasa-obake, or umbrella spirit, a creature not to include in what is intended to be a creepy spook show.

So, what of the hundred monsters promised in the title? Forget it, Charlie. The real Yokai action does not occur until literally the last ten minutes or so, in which a giant, cackling head shows up and drives the would-be sex slaver to madness, making him kill his top henchman and then himself, and then a series of Yokai frighten the land owner into a similar state and similar actions.

The vengeance of the Yokai. (Maybe twelve or so, definitely NOT one hundred.)

The Yokai, perhaps twenty-some-odd, are then briefly seen in a slow-motion parade down a road as they cavort and bear a couple of barrels of saké, presumably for a celebratory party in their realm. The mysterious samurai turns out to be an investigator for the local high magistrate who was sent to investigate all of the narrative shenanigans and help the locals when possible, but when he arrives to confront the baddies and take them down, he finds his work has already been done for him by the Yokai, upon which he muses with the quote that opened this review.The bodies of the baddies and their thugs are carted off as their wives weep and the locals mill about, confused as to what exactly happened to their oppressors. THE END.

The Yokai: boogieing down after effortlessly kicking ass.

ONE HUNDRED YOKAI TALES is not a bad film, but its horror elements are far, far less than what is promised, and Western viewers are likely to be disappointed by it, even Westerners who are steeped in Japanese period cinema and folklore.  It's worth a look, but it can;t hold a candle to its far more entertaining (if not scary) sequel, YOAKI DAISENSO (THE GREAT YOKAI WAR), released on home video in the U.S. as YOKAI MONSTERS: SPOOK WARFARE, which I saw first, over a decade ago, and which I thoroughly enjoyed. But I have other films to get to this time around, so maybe I'll save that one for next year's roster... 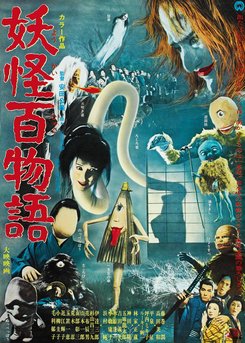 Poster from the Japanese theatrical release. "One Hundred Monsters," my black ass.. Twenty-five, more like, and that for only maybe five minutes.
Posted by Bunche (pop culture ronin) at Wednesday, October 27, 2021