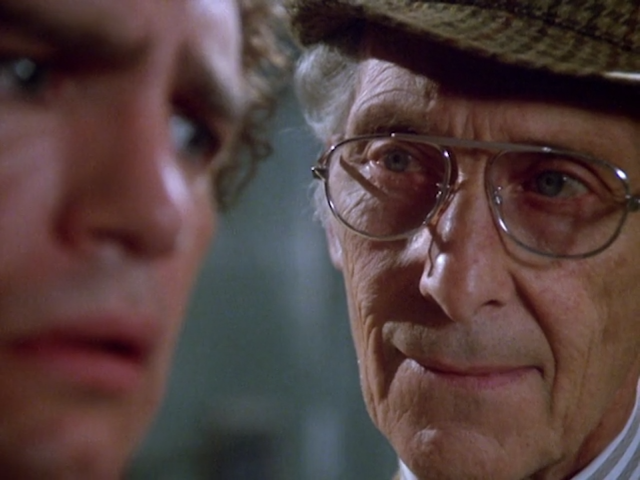 When Peter Cushing offers you a job, look for a slot on the overnight shift at a 24-hour While Castle in the South Bronx instead.

Safe-cracker Chuck Spillers (Brian Cox) is released from prison after serving two years, a sentence that would have been shorter had he not attempted to escape. When he returns to his home, Chuck finds that his wife, Annie (Elaine Donnelly), has been living in abject poverty, having given up all but the most vital of necessities in order to survive and keep the house in her husband's absence. With no job prospects, Chuck tells Annie that a "strange" old man would come to visit him in prison, giving him an envelope of cash and a contact address. Chuck visits the old man, one Martin Blueck (Peter Cushing), who survived imprisonment in a Nazi concentration camp during WWII, so he feels that he and Chuck are kindred spirits. Blueck now runs a pet shop, but in its basement he conducts secret behavioral experiments on wild animals, including some apex predators, in which he trains them not to leave their open cages, training reinforced by potentially lethal electric shock. His goal, or so he claims, is to train animals for cageless zoos, so he enlists Chuck to care for and feed his menagerie while he is away for an unspecified time. Chuck is not at all comfortable with the animals' situation, as he had been disciplined during childhood by being locked in confined spaces for extended periods of time, hence his pathological hatred of captivity. Nonetheless, desperate for employment and income, Chuck accepts Blueck's offer and the old man leaves him to his tasks. But while handling the animal chores, Chuck notices a wall safe in the basement, and he begins to contemplate robbing the old man who had done him a kindness. Bad idea...

By the time HAMMER HOUSE OF HORROR began airing in 1980, the once-groundbreaking studio whose horror output redefined the landscape of cinematic horror and brought it kicking and screaming out of the fog-enshrouded fever dream of the Universal horror cycle had run its course. The visceral and more explicit shocks provided by the likes of THE LAST HOUSE ON THE LEFT, THE EXORCIST, and THE TEXAS CHAIN SAW MASSACRE had rendered Hammer's colorful, atmospheric costume Gothics quaint, though Hammer's fan base remained despite the dwindling box office returns. Thus it was that ITC Television — the company that gave the world THUNDERBIRDS — revived the Hammer brand and transferred it to British television, complete with the brand's signature humor, nudity, and splatter intact, though setting its tales in the then-present day of 1980.

Like any horror anthology series, its entries were very much hit and miss, and "The Silent Scream" is often hailed as the very best of the lot. Brian Cox stars as Chuck, and he provides a terrific nervous performance, some six years before he became cinema's first Hannibal Lecter in MANHUNTER (1986). But it is the always-welcome presence of Hammer icon Peter Cushing that makes this a must-see. He had lost not one step in being able to convey a clam, steely madness, and his performance only adds to the power of the story's taut suspense and "Oh, my god!!!" moments. Definitely worth watching, the entire 13-episode run can be had on Amazon Prime and Tubi, though unfortunately not without frequent and often haphazardly-placed interruptions by ads.