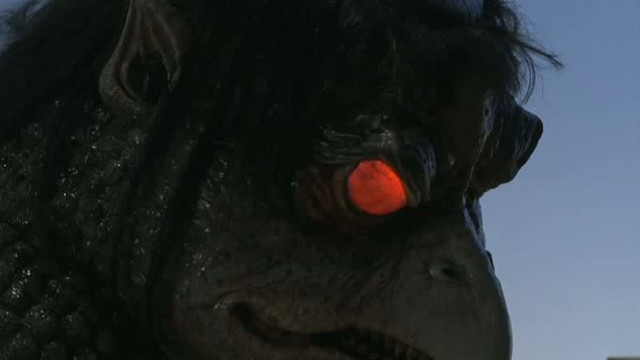 When a kaiju movie utterly loses its marbles.

The lunatics behind THE MACHINE GIRL and TOKYO GORE POLICE have struck again and this time they've set their sights on Japan's signature take on the monster genre.

Pretty young Kanako (Misato Hirata) returns to her rural hometown after her attempt at a J-pop music career in Tokyo tanks, and we immediately realize that she occupies a place existing between the mundane world of man and the bizarre realm of the yokai, creatures from classical Japanese myth and legend. The few townspeople we see appear as creatures straight out of old block prints, only transposed into the modern day and holding down everyday jobs, and Kanako does not bat an eye at their strangeness, what with having lived among them her whole life. While walking home from the train station, Kanako sees her kindly old grandmother (played by Hiroko Sakurai, beloved to tokusatsu junkies as Fuji from the original ULTRAMAN series) struck and killed by a speeding car driven by an assortment of drunken joyriders. 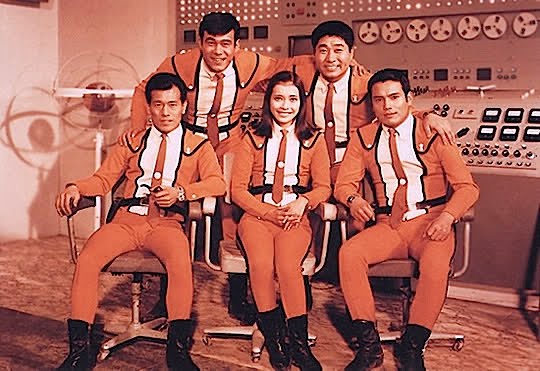 Taking her dying grandmother's wishes to heart, Kanako accepts her family's mantle as a Shinto priestess and vows to take care of the family's shrine dedicated to the kappa, a legendary creature deeply connected to her ancestors. 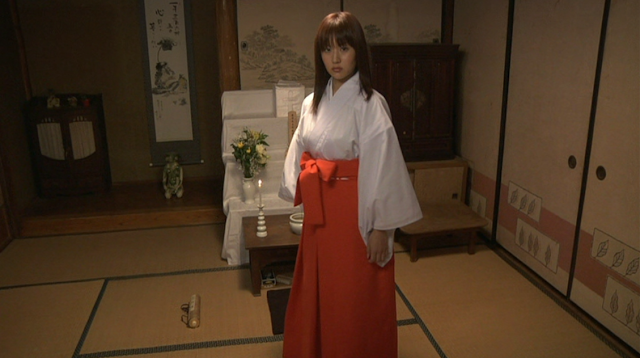 Kanako in her priestess' formalwear.

One unexpected side effect of the drunken joyriders' rampage is the knocking of the sacred kappa shrine into the ocean, where the statue comes to life. The kappa soon makes its presence known when it appears in Kanako's yard and happily dances to one of her cheesy (and failed) pop songs. 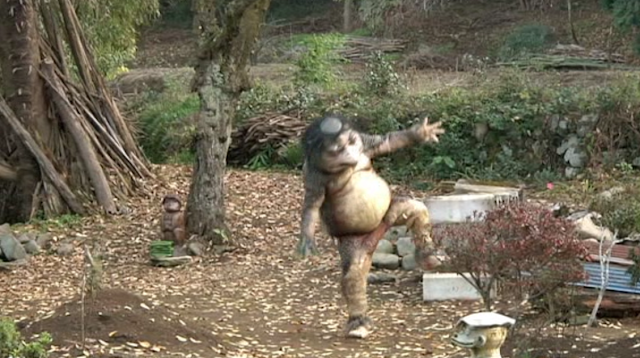 An adorable and friendly monster, the kappa befriends Kanako and two of her buddies (presumably old friends but the translation does not really make that clear since it's really unimportant to the story) and they all spend a brief time playing games and having fun in the idyllic Japanese countryside. 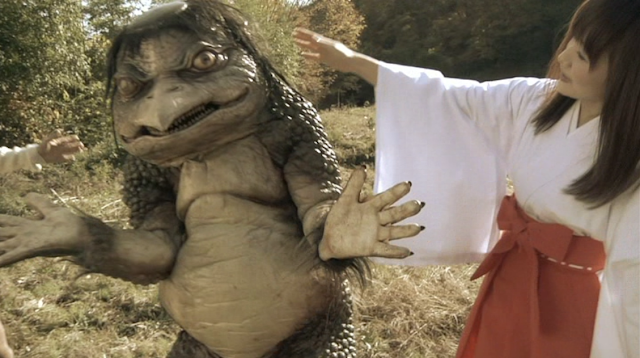 Good times with good friends. Too bad it can't last...


But while all of these good vibes are happening, mysterious figures are seen lurking about at night. Something strange and mostly unseen emerges from the ocean and kills the male joyriders, while saving the females for some sinister purpose overseen by uniformed men...

Up until this point, the film seems like it's going to be something along the lines of DARBY O'GILL AND THE LITTLE PEOPLE (1959) or THE SECRET OF ROAN INISH (1994), wherein we have the mundane existing alongside the fantastic in a way that blends the charming and the wistful. Well, this is a modern Japanese concoction from the makers of films that go out of their way to be balls-out insane, and any hope of sanity is irrevocably dashed when the kappa and Kanako are captured by the mysterious men in uniform and the film veers straight into left field, becoming perhaps the funniest parody of Japanese giant monster movie tropes thus far to hit the screen. It's important to note that sometimes Asian humor does not travel well past its own borders, but the comedic intent of DEATH KAPPA is universally outrageous and silly, even Pythonesque in some respects, and can easily be grokked by anyone who's ever seen any of the classic Godzilla or Gamera films, or even old reruns of ULTRAMAN.

When Kanako regains consciousness, she finds that she and her kappa pal are at the mercy of a troop of modern day supporters of the WWII-style Japanese imperialism who intend to lift their nation from decades of postwar decadence and pussification by creating an army of weaponized fish-men, a plan concocted during WWII by a discredited (read "mad") scientist whose tits-out loony grand-daughter has continued his experiments and now only needs cells from the innocent kappa to give her army of fish-men (which totals three) that extra "oomph." 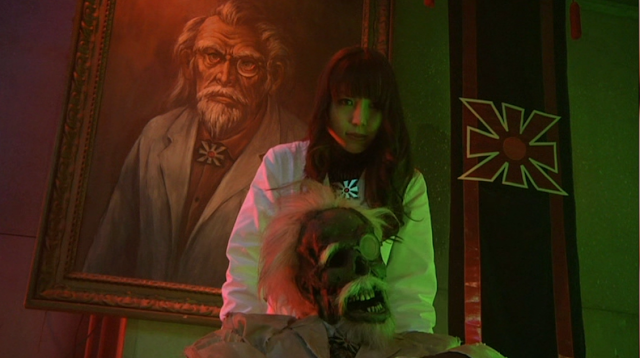 The modern day mad scientist and the corpse of her beloved and equally-insane grandfather, which she wheels around in a wheelchair. Yeah, that's normal...

It is swiftly revealed that the female joyriders were kidnapped to be turned into distaff members of the fish-army and Kanako is next in line for conversion, but kappa comes to the rescue, proving his skill at sumo (a sport attributed to the kappa in legends) and other forms of martial badassery. Kappa came here to do two things: kick ass and chew bubblegum. And right now he's all out of bubblegum.

After kappa soundly kicks the collective ass of the imperialism revivalists and the fish-men, 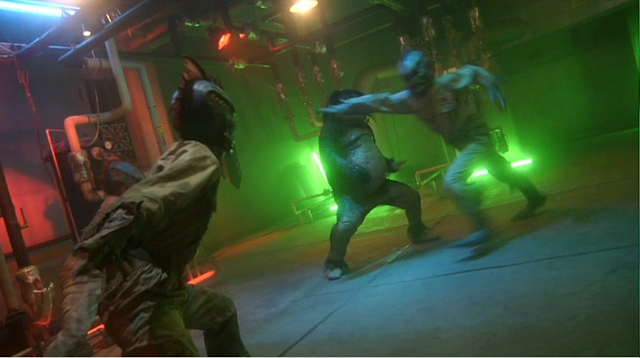 the mad scientist chick exposes the fetish gear beneath her lab coat and opens up with a machine gun before blowing the lab to kingdom come with a leftover atomic bomb. 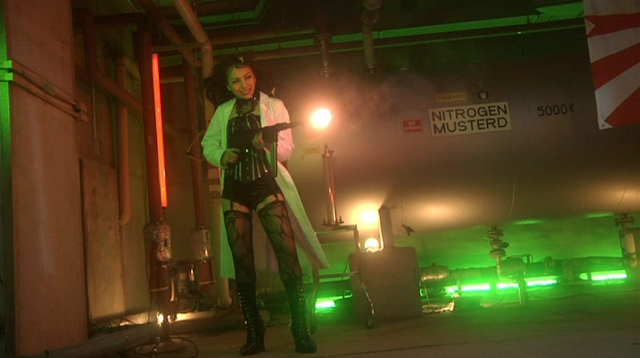 Once the (very bogus) smoke clears and everybody is apparently blasted to smithereens, a random giant monster called Hangyolas appears from out of nowhere and immediately makes with the urban renewal boogie. 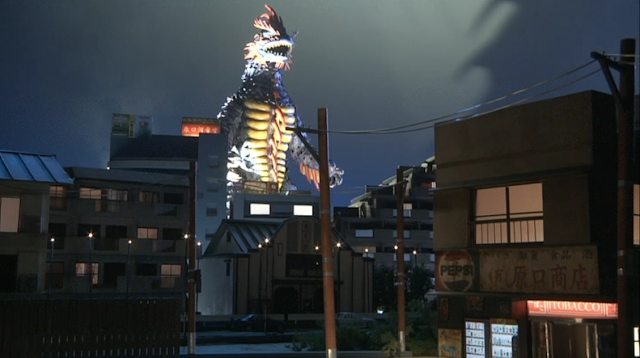 Looking like a bizarre fusion of your garden variety Godzilla flick rampage or an episode of ULTRAMAN as filtered through MAD TV, Hangyolas destroys intentionally-fake buildings by the buttload as he also contends with wobbly toy tanks and hobby shop airplanes suspended on wires that are all-too-visible. 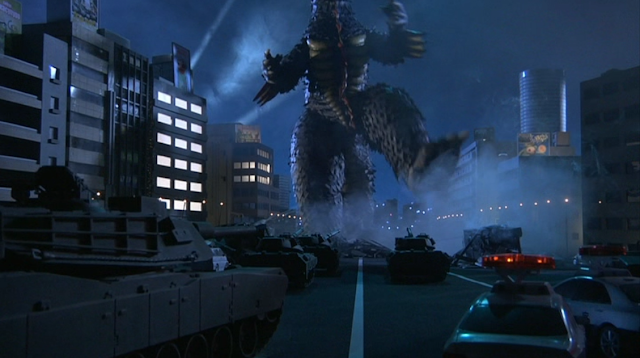 Like a throwaway detail out of a Mad Magazine parody of the genre, one of the defending aircraft is even piloted by an apparent drag queen, complete with makeup and a kicky scarf. 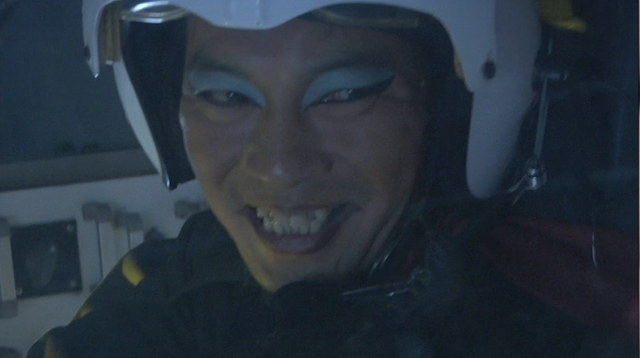 The balls-out rampage even includes a number of those atomic heat-ray tanks like those seen in MOTHRA (1961) and many other Toho city-stompers, 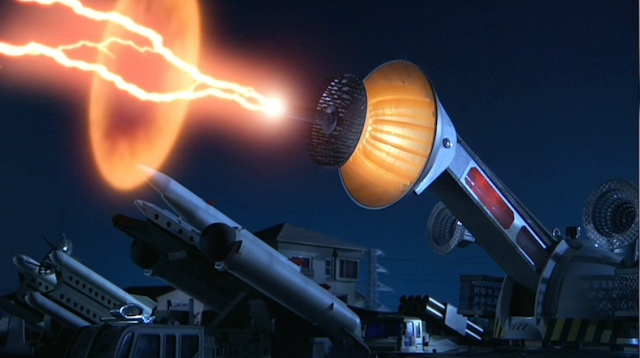 and we even get scenes from the sidelines where people whose homes have been destroyed sit by and watch the news reports of the destruction. Among the refugees is some knitting dude in a pink wig and schoolgirl's sailor suit uniform who's supposed to be a woman and is even given a dubbed female voice. 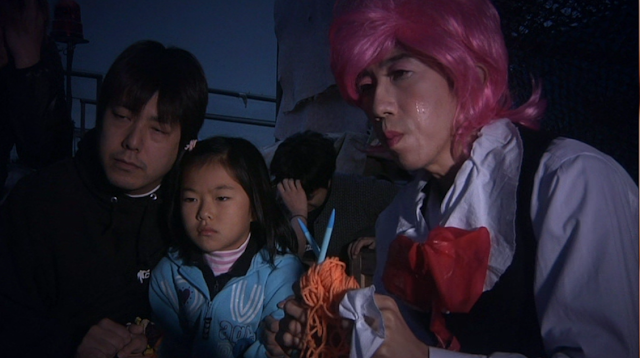 Then you get the expected hyperactive and suicidal news reporters, one of whom dies on the receiving end of Hangyolas' fiery breath, which would have been horrifying if not for the newscaster's screaming burning body being depicted with a stiff G.I. Joe-style doll. 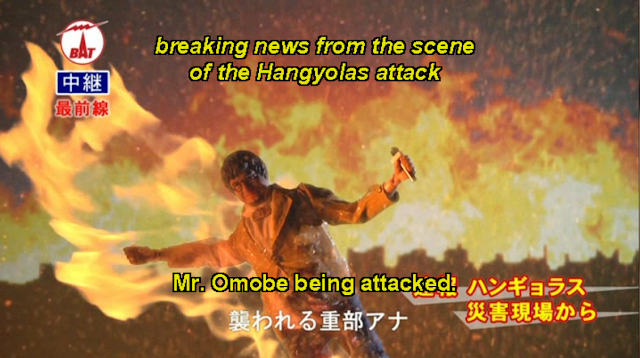 When all hope seems lost, the kappa suddenly returns, only now he's several hundred feet tall and ready to engage Hangyolas in much building-smashing combat, some of which involves the kappa showing off his impressive martial arts skills, including cobbling together and using a pair of makeshift 'chucks. 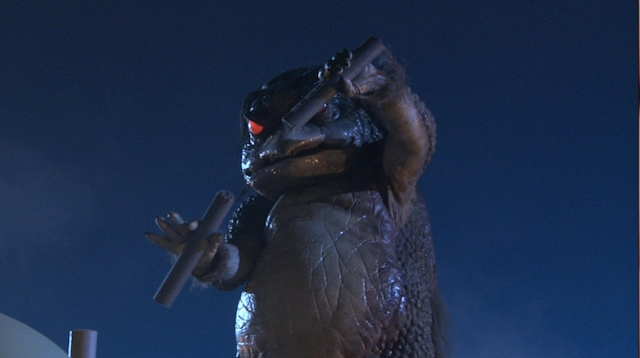 No, you are not hallucinating.


After defeating Hangyolas, kappa becomes evil for no apparent reason and launches into his own wave of city-stomping and fire-breathing, leaving it up to an also-not-dead Kanako to save the day by placating him with water for his skull plate and the dulcet tones of her lousy pop song. 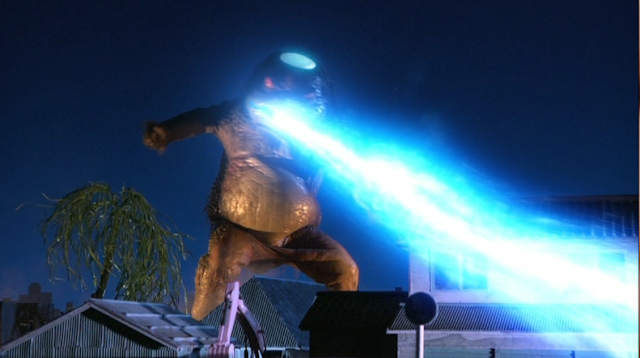 When all is said and done, the calmed kappa is once again a good guy and he is last seen swimming away into the horizon, an ending seen in countless Japanese giant monster flicks. 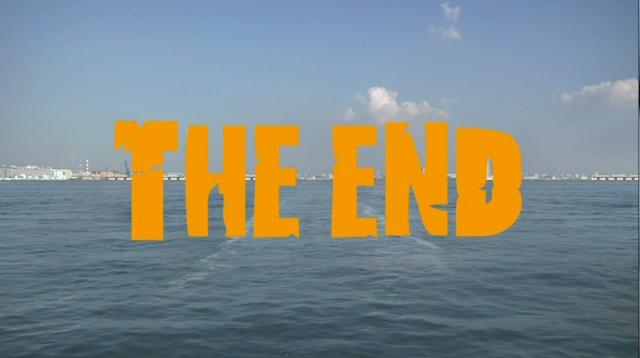 When the film's shift in tone occurs, it's as though a completely different movie featuring the same characters takes over and goes completely nuts, wallowing in damned near every trope found in the entire daikaiju cinema catalog. 2008's MONSTER X STRIKES BACK: ATTACK THE G8 SUMMIT mined similar territory and was also quite funny for those familiar with this kind of thing, but DEATH KAPPA has it beat by a mile for sheer lunacy and willingness to be as visually and conceptually crazy as possible. It takes a little while to get going and even seems rather treacly at first, but all of that serves to get you ready for a completely different type of film and then it violently pulls the rug out from under you, figuratively sending you tumbling down eight flights of stairs and resulting in considerable brain damage. Needless to say, HIGHLY RECOMMENDED. 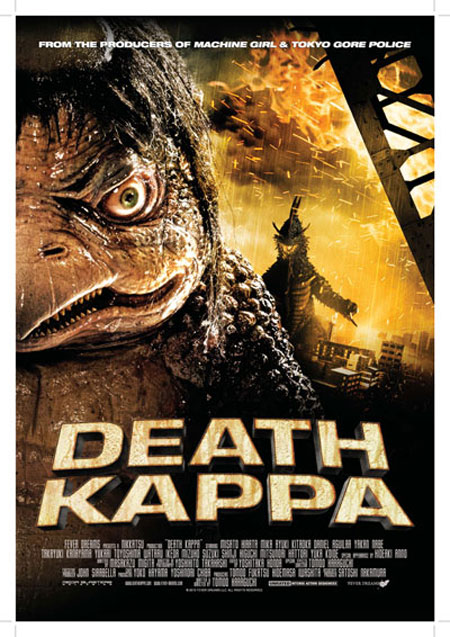