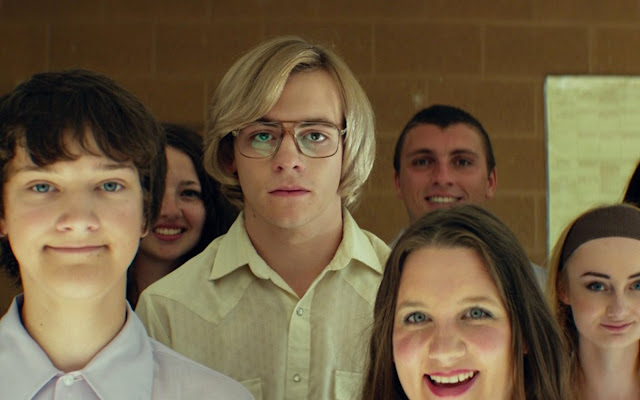 "Joyce, we need to talk about Jeff." — Jeffrey Dahmer's dad.

It's 1978  in Bath, Ohio and young Jeffrey Dahmer leads a lonely existence in the limbo of his senior year of high school and the escalating dysfunction of his home life. A seemingly emotionless blank slate of an outsider whose loner status concerns his workaholic chemist father and whose oddness is overlooked by a mother who is in willful denial of her own untreated mental illness (she was recently released from a mental health care facility), Jeff spends his spare time collecting road kill animals that he takes to "the Hut," his father's isolated shed, where he deposits the carcasses into jars that he fills with a mild acid (obtained from his unknowing dad) and is fascinated as the flesh corrodes over months, leaving behind bones that the boy fetishizes. 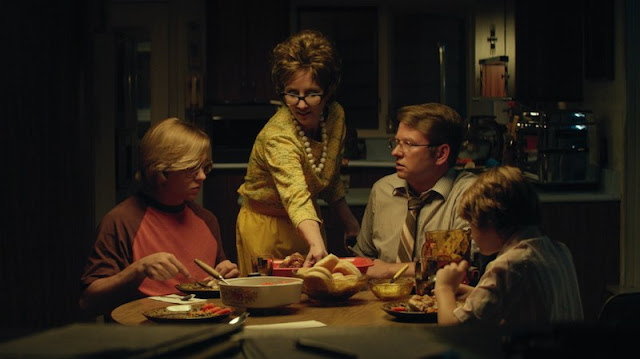 The Dahmers: the 1970's American nuclear family in a state of tragic decay.

At school Jeff endures all of the usual pitfalls of high school loserdom, including bullies, boring and classes, the banality  of high school activities and "school spirit," until one day he realizes that he can garner laughs and attention by acting out in odd ways. He soon becomes known as a class clown for making strange noises at random and for "spazzing out" by imitating fall-on-the-floor seizures and the palsy of the interior decorator hired by his mom.

His attention-getting antics amuse his peers, but at what cost to young Jeff's dignity and soul?

Such displays, soon known as "pulling a Dahmer," win him a small number of friends who admire his disruptive outbursts, as they shake up the boredom of daily high school existence. With friends for the first time in his life, Jeff and his pals engage in harmless pranks around the school, but their fun and tomfoolery starkly contrasts with Jeff's deteriorating home life and his own unease about his awakening to his homosexuality, which is ignited by regular glimpses of the hunky doctor who jogs near Jeff's house several times per week. But it was 1978 and the savage social arena of high school was notoriously unkind to "faggots," so Jeff keeps that aspect of his identity to himself. 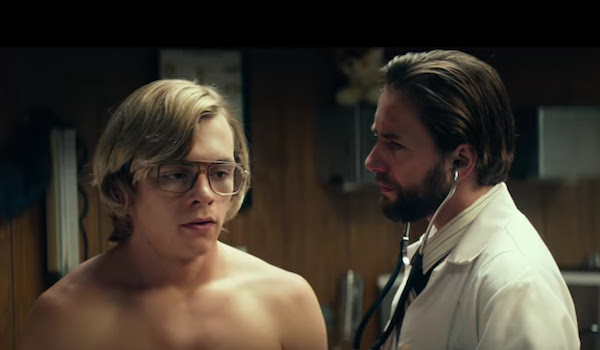 When a common physical becomes an ignition point for a twisted interpretation of normal homosexual desire.

As the year drags on, Jeff's family life deteriorates further, as his father, who has been finding solace at the bottom of a tumbler of scotch and is fed up with living (but not actually dealing) with his wife's mental illness, moves into a motel while Jeff is away on a class trip to Washington, D.C. But even before that blow, Jeff's dad, frustrated with his own miserable existence, goes to the Hut and throws out Jeff's morbid menagerie, ordering his son to cease such creepy activities immediately. (He later tells Jeff that he sometimes gets mad at his son because he sees in him things he does not like about himself.) This does not deter Jeff, as he continues to collect dead animals, only away from home, as well as trapping and killing live prey for crude dissections in the woods.

Jeff expresses an interest in pursuing biology, as he is curious about the insides of living things and how they work, a statement that presages dark things to come. Steadily declining, Jeff gets into booze (which he drinks during school and damned near any other available time) and sometimes shows up to school reeking like roadkill. Already an emotional tabula rasa, his drinking renders him a shambling, silent automaton while his friends, who still exploit him for his "spazzing" antics, begin to notice that his is legitimately "off" and that he has begun to distance himself from them. With his dad living in a motel room and his mother and little brother going to stay with grandma in the wake of the parents' divorce — with his father pointedly wanting custody of his younger son but not Jeff —  Jeff, now in a perpetual alcoholic state of disconnected numbness, is basically abandoned and left in the now-empty house, alone with his increasingly dark thoughts. All of this adds up to a long-simmering rage that must inevitably come to a head... 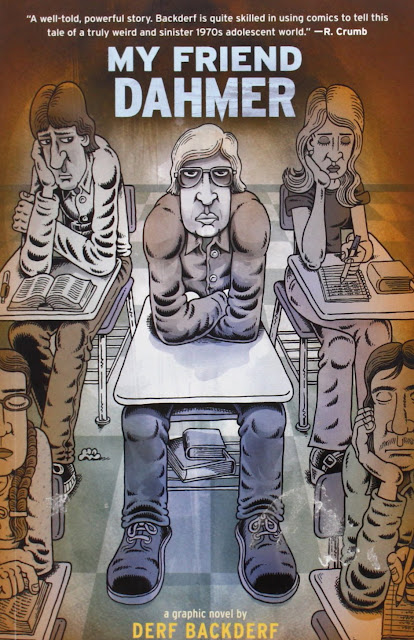 The 2012 graphic novel memoir, the source material from which the film was adapted. I gave the then-unknown book a glowing review when I covered it for Publishers Weekly nine years ago, my copy being given to me by the author, autographed and accompanied by a doodle of Dahmer's bespectacled face, at the publisher's press meet-and-greet on the night before the 2012 NY Comic Con. I have tracked the book's rise to prominence ever since, and I am delighted to know that film more than did it justice.

Adapted from the critically-acclaimed, award-winning 2012 graphic novel memoir of the same name by John "Derf" Backderf, one of Jeffrey Dahmer's small circle of friends in real life, MY FRIEND DAHMER presents an all-too-recognizable reality of the often painful and confusing point when one is on the cusp of adulthood and the prospect of life beyond high school can be a foreign and terrifying prospect for some, even for kids who have the best possible home life. Like the graphic novel, the film does not make the audience comfortable as the narrative drags us into Jeff's sad, lonely world, one that he barely registers through eyes that observe with a blank 100-yard stare, hiding his pain behind the antics of the class "spaz." It's an intimate portrait born of genuine sadness, loneliness, and dysfunction framed against the environment of surviving high school as well as home, and it never feels and looks less than authentic. (Having lived during the era in which this takes place, I can tell you with authority that the film gets everything right.) None of the over-the-top histrionics and cartoon villainy and sadism of a Stephen King high school terror tale is to be had here, and it is that careful and honesty handling of the subject matter that somehow manages to humanize the now-infamous twisted, damaged young man who would eventually go on to murder, torture, and cannibalize 17 confessed-to male victims before he was apprehended in 1991. The film could have been rendered in animation that stayed faithful to the graphic novel's Fred Hembeck meets "ugly" underground comix-style aesthetics, but the filmmakers wisely opted for a live-action cast of young unknowns whose performances are never less than totally honest and believable, with singer/songwriter/musician/actor Ross Lynch disturbingly mesmerizing as the young Dahmer. He is simply superb in the part.

The narrative ends at the inception of Dahmer's killing spree, but no murders or gore are depicted, as this is not some exploitationer or another in the long line of charnel house slasher fare. This is a human story, albeit a dark and dire one, and it is the strength of its humanity and our benefit of hindsight knowledge of the nightmare to come that makes this a true-to-life example of abject horror. Of when suburbia stands in for the abyss. HIGHEST RECOMMENDATION. 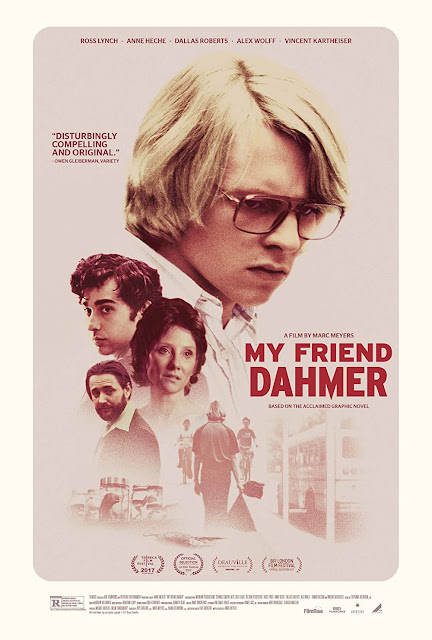