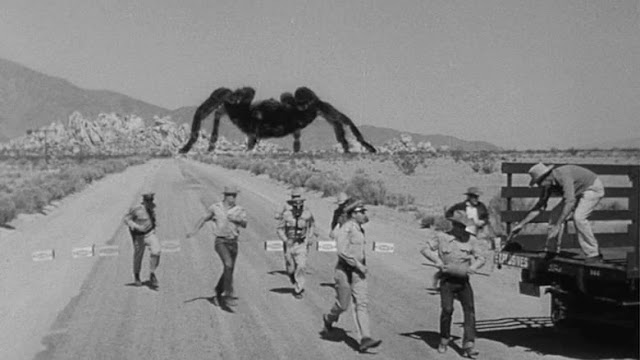 TARANTULA is a competent entry into the legion of colossal critter movies that informed the American cinematic zeitgeist of the 1950's, and since its release it has gone on to become sort of the poster child for classic-era giant bug movies. But why is that? Its story was merely serviceable, it's neither scary nor gory, and its star creature was just an ordinary tarantula that was enlarged via trick photography instead of a (more expensive) stop-motion creation or an animatronic. It's every bit a by-the-numbers atomic age thriller (though its monster is the result of nutrient experiment rather than the atomic bomb), so why is it enshrined as the titan of its breed?

My guess is that it's due to the admittedly arresting visual of the gigantic arachnid leisurely strolling around the Arizona desert while wreaking rather tepid havoc. Most people have a primal fear and loathing of spiders, so I guess the fact that the creepy-crawly found here is monstrous fed directly into that phobia. Me, I happen to love spiders. I think they are delicate and beautiful, graceful little artisans who weave wondrous constructs out of their own bodily fluids, and they help us out by eating insects that would otherwise irritate and inconvenience us. What's not to love? And Tarantulas? They are like the sheepdog of spiders, what with them being all hairy and lumbering. Not my idea of scary at all.

No, the crown jewel of 1950's giant-bug-on-the-loose flicks is the previous year's THEM!, which is superior in every way and is also a genuine landmark in the genre. Though directed by Jack Arnold, the guy who gave us classic '50's sci-fi flicks that include IT CAME FROM OUTER SPACE (1953), THE CREATURE FROM THE BLACK LAGOON (1954), and the superb THE INCREDIBLE SHRINKING MAN (1957), TARANTULA pales in comparison with Arnold's other works. While an okay way to pass 80 minutes of it turns up on cable, it would have benefited from the infusion of some genuine scares. Yeah, a big honkin' spider touches on some folks' most deep-rooted fears, but to some of us a big honkin' spider is just a big honkin' spider. If they could have gotten away with it, the film should have been entitled "HOLY SHIT! IT'S A BIG FUCKIN' SPIDER!!!" (The same basic concept was mined to much more entertaining effect in 1958's EARTH VS THE SPIDER, which was made even more fun when it got the treatment as an episode of MYSTERY SCIENCE THEATER 3000 in 1991.) But whatever the case, this was one of the foundational works for those of us who came up as "monster kids" in the 1960's and 1970's, a pre-cable era where old movies were being rediscovered on TV, with horror and sci-fi movies often being showcased on weekends as fodder for budding genre fanatics, so I guess its place of enshrinement is earned by default and ubiquity. It's the epitome of a junk food matinee entry.

Oh, and TARANTULA is also notable for featuring an uncredited early role for Clint Eastwood. He's the jet fighter pilot who leads the napalm attack that immolates the title monster. 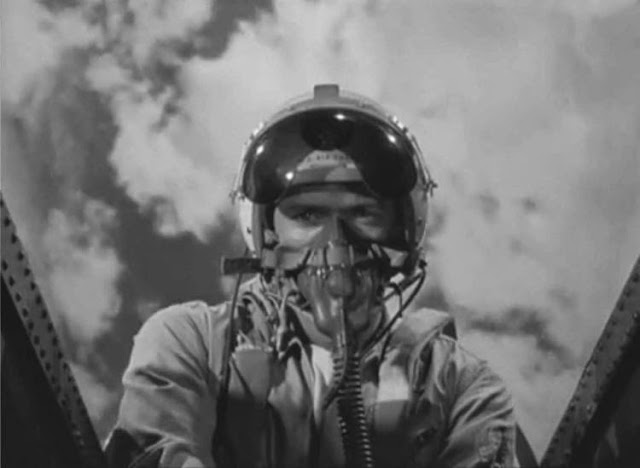 A young Clint Eastwood, about ten years away from screen immortality in Sergio Leone westerns. 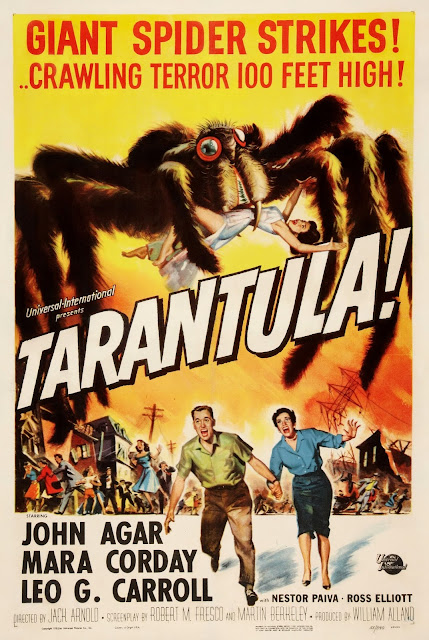