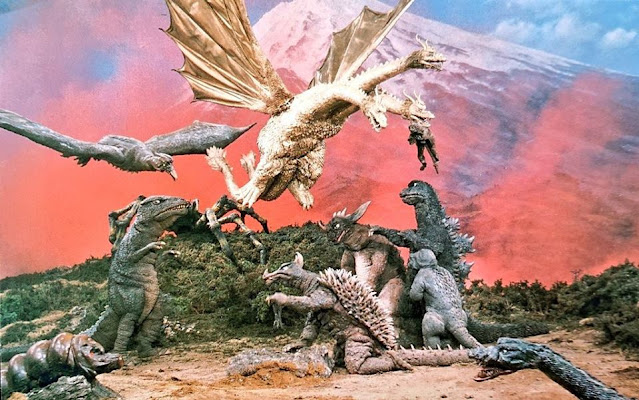 Undisputed classic, or the most over-rated giant monster flick ever made?

To fans of the daikaiju genre there are a handful of films that are generally considered to be inviolate classics of the form, movies like the pre-Americanized version of GOJIRA (1954), RODAN (1956), MOTHRA (1961), GODZILLA VS. MOTHRA (1964), GHIDRAH, THE THREE-HEADED MONSTER (1964), and MONSTER ZERO (1965). But there's one rubber-suited, city-stompin' teriyaki terror-fest that is almost universally hailed as "the greatest Japanese monster movie of all time" and that would be 1968's DESTROY ALL MONSTERS, a film that would clear the streets of kids if it were known to be playing on THE 4:30 MOVIE during my early youth as part of that series' celebrated and semi-frequent "Monster Week" (the other film that could be counted on to have that affect on afterschool playtime was JASON AND THE ARGONAUTS). Many a fan of the Toho monster opuses gets a wistful look on their face when mention is made of DESTROY ALL MONSTERS — DAM for short — but, despite a lifelong loyalty to Godzilla, his colleagues in urban renewal and their far-fetched adventures, I'm here to call "bullshit" on DAM once and for all and hopefully find others who share my opinion. By the time the Godzilla flicks reached the point when DAM was ready to roll, there had been a marked shift in the function of Big G and his fellows that saw the once dreaded anthropomorphizations of the horrors of atomic radiation now being cast in the role of the implacable protectors of the Earth, and while the movies remained fun they also veered ever steadily into kiddie movie territory. In my opinion that course in content was firmly in place as of MONSTER ZERO, but that shift definitely worked within the context of that film — Godzilla's infamous "victory jig" notwithstanding — and the somewhat spare quality of the film made the threat of Devo-looking invaders from Planet X quite intimate and unquestionably dire.

MONSTER ZERO's would-be invaders from Planet X, moments before breaking into an encore of "Gates of Steel."

Even the film's requisite "human interest" subplot engages the audience and actually figures seamlessly into the story's conclusion, and if you ask me no original-era Godzilla movie succeeded so well from a narrative standpoint from MONSTER ZERO onward. The Godzilla films had pretty much said all they had to say, both in terms of symbolic commentary on nuclear arms proliferation and general entertainment, so any subsequent pictures would have virtually no choice but to be a re-hash of what had come before. But how to keep the series going and keep asses in seats? Simple answer: excess, excess, excess, all at the cost of the elements that made the Toho monster cycle so engaging in the first place. (That way of thinking was also exhibited in the James Bond series as evidenced in 1965's THUNDERBALL, an overblown and bloated "spectacle" outing that began the Bond films' long stretch of creatively-arrested development and repetition.) DESTROY ALL MONSTERS can be seen as a more elaborate remake of MONSTER ZERO, only one in which the interesting human elements are replaced with a dull and faceless group of space-force astronaut heroes who are virtually interchangeable, and the threat to the Earth is both perfunctory and uninteresting, marked only by the fact that the silver wimple-clad alien invaders of the piece, the Kilaaks (love that name!), are all females.

The Kilaaks: has a bunch of would-be world-conquerors ever looked more like they'd be right at home during a '70's-era Parliament show?

Their plot for conquest isn't even original, what with being a bald-faced swipe of Planet X's idea of mind-controlling the Earth's giant monsters and using the unstoppable behemoths to cause catastrophic destruction on a massive scale, but in MONSTER ZERO the plan hinged on the enslavement of only Godzilla and Rodan and later the space-monster King Ghidorah (or "Ghidrah" as he's known in the West). In DAM, the Kilaaks mind control the titanic inhabitants of Ogasawara Island, aka "Monster Land" — a Pacific marine research island not to be confused with the later and better known Monster Island — and turn them loose all over the globe, which in some cases is quite spectacular (Gorosaurus' attack on the Arc De Triumphe from underground is pretty cool, and Godzilla's virtuoso atomic flame curveball assault on the United Nations building is delicious giant monster showboating at its best), but other than the expanded scale, this is very much a case of "been there, done that."

I'd say the reason most people give this film the kind of adulation it receives has everything to do with many of its supporters not having seen it since childhood and the fact that it's got every Toho giant monster "star" in it, with the notable exceptions being the Japanese version of King Kong (as seen in KING KONG VS. GODZILLA and KING KONG ESCAPES), brothers Sanda and Gaira (from the memorable WAR OF THE GARGANTUAS), space-jellyfish Dogorah (from DOGORAH THE SPACE MONSTER) and the charmingly ludicrous giant version of Frankenstein (from FRANKENSTEIN CONQUERS THE WORLD). Unfortunately, while those critters didn't make the cut, non-entities like Varan the Unbelievable, Gorosaurus and Manda are included, along with the utterly unwanted return of Minya (or "Minilla," according to Toho's spelling), the supposed son of Godzilla, also known and loathed by Westerners as "Baby Godzilla." Minya is a character that I have never liked, not even as a child, and I have yet to find a daikaiju fan from anywhere on the globe, not even Japan, who can stand him in the least. His antics are not cute but insufferable, and I would love to see his unformed, quasi-mongoloid/tadpole-looking ass blown into showering, smoking chunks of foam rubber by a judiciously-placed Specium blast from the skilled hands of professional inter-galactic monster-slaying badass Ultraman. 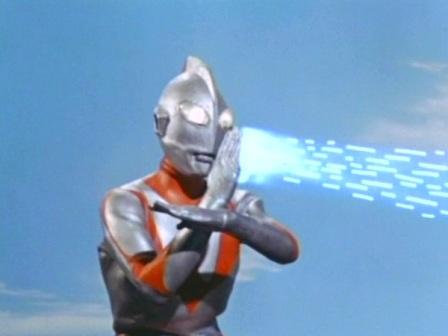 The awesome Ultraman unleashes his famous Specium beam, a weapon that blew the motherfucking shit out of damned near every monster he turned it against. If only he'd met Minya...

Bottom line: with the exception of the sheer number of giant beasts, everything that allegedly makes DESTROY ALL MONSTERS a classic can be had to much greater effect in MONSTER ZERO — which is available on home video in a great edition featuring both the subtitled Japanese version and the dubbed US release in gorgeous re-mastered widescreen — so enough with the dubious pleasures of DAM, already! Sit your kids through the better alternative instead. 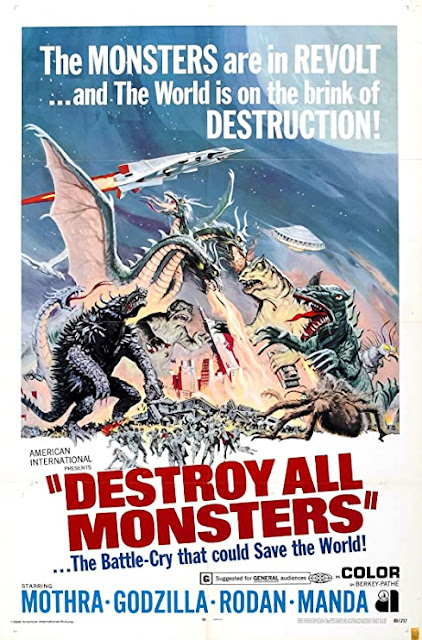