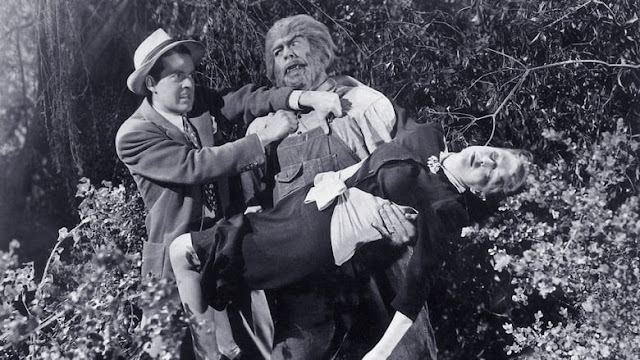 "Grrr! Grrr!!!Jesus, can't a brutha hump a leg without some asshole harshing his groove???"
At an unspecified swamp locale early during the United States' involvement in World War II, Dr. Lorenzo Cameron (George Zucco) conducts experiments intended to create American super-soldiers for the Allied war effort. Unfortunately, while others elsewhere conducted top secret experiments that produced everyone's favorite patriotic superhero, Captain America, Cameron's great idea is to generate werewolf soldiers to unleash against the enemy. Or rather, that's the long-term goal. At present, Cameron is more concerned with creating a werewolf that he can dispatch against the colleagues who laughed at him and destroyed his career because of his obviously insane interests. For this sinister purpose, he injects wolf blood serum into hulking mentally-challenged gardener Petro (Glenn Strange, soon to be Frankenstein's monster in the Universal monster cycle), as one does, and in no time Petro is wolfing-out and sent to kill the mad doctor's enemies, whom Cameron manipulates into encounters with the wolfman. (There are other characters, but they are of only perfunctory importance, so for the purposes of this review I choose to ignore them.) 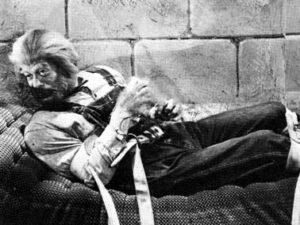 THE MAD MONSTER is yet another cheapie from PRC, a studio notorious for its "poverty row" output, and in this case its a gene-splicing of THE WOLF MAN (obviously), OF MICE AND MEN's Lenny character, and PRC's own infamous crap-fest, THE DEVIL BAT, and the result is just as much of a time-filler as one would expect. It's rather dull, has no scares to speak of, it boasts a sad-looking wolfman in overalls that give him the aspect of an hirsute, ravening Mister Green Jeans, and the film's sole saving grace is the super-atmospheric swamp set. 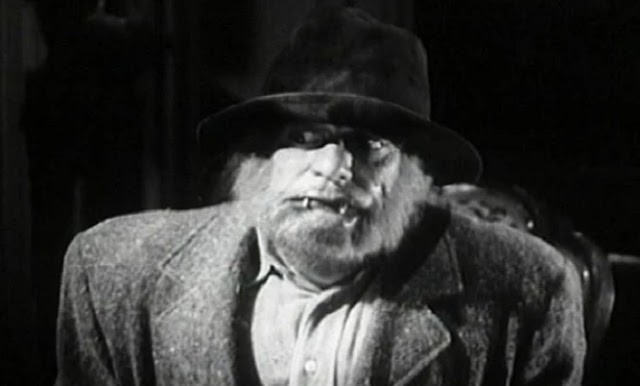 So why bother bringing it up at all? Well, for all horror fans there is always a gateway film to a favorite type of monster, and for me this was "baby's first werewolf movie" when I was four years old. Its elementary doses of black-and-white aesthetics, a man transforming into a savage (if admittedly tatty) savage fusion of man and apex woodland predator, and a mad scientist held my little mind riveted, and I absolutely dug it at the time. Thus, I have a very soft spot in my heart for its zero-budget charms. 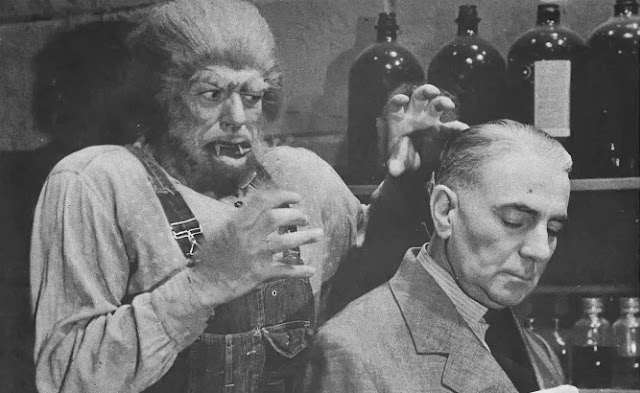 A werewolf attack, or just another Tuesday at the salon of "Mister Lycos," the West Village's most in-demand lycanthropic hairdresser?

It was maybe a year later that I saw a genuinely great werewolf film, specifically THE WOLF MAN, and that masterpiece of classic Universal horror cemented the werewolf as my favorite monster of all the classic archetypes. So if you, like me, are a rabid werewolf completist who will sit through literally any flick wherein a guy turns all hairy and ravenous, give this a look. It's of interest as one of the earliest examples of the sub-genre, and also as an example of a quickly-made cheapjack ripoff meant to ride on the jock of a vastly better movie. 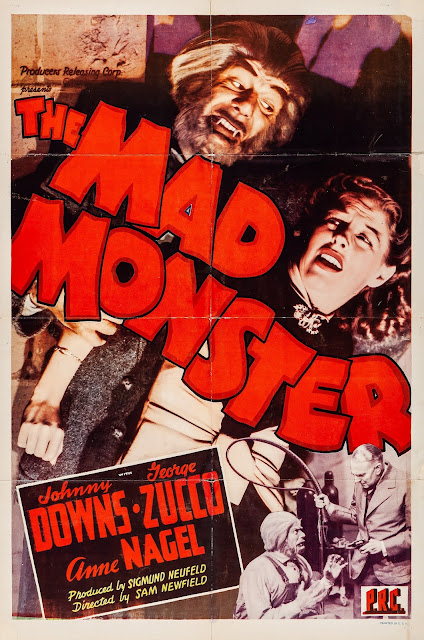