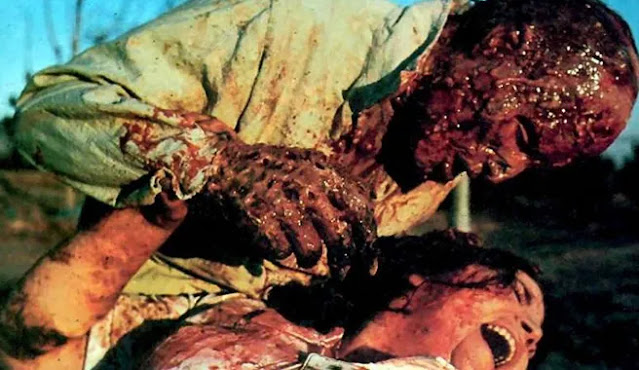 There really isn't much to say about THE INCREDIBLE MELTING MAN, other than to note that its main selling point was its disgusting special effects (provided by a young Rick Baker). It pretty much borrows the basic conceit of THE QUATERMASS XPERIMENT (1955) — an astronaut returns from a space mission and mutates into something horrible — only minus that film's genuine suspense and sense of impending doom and dread, and it simply bounces from scene to scene of the titular monster becoming ever more a pile of what looks like an ambulatory slurry of blood, vomit, pus, semen, and Open Pit barbecue sauce. The guy goes around devouring the flesh of random victims in a hopeless effort to stave off his ongoing liquefying while leaving pieces of himself in his wake, all the while pursued by an assortment of characters so bland, you wouldn't notice if they were replaced with cardboard cutouts. There are a couple of fun set pieces, including the melting man scaring the shit out of a little girl while her male playmates laugh their asses off, and a bit where a fly fisherman gets his head ripped off and his noggin goes bobbing down the stream, but the overall piece does not add up to much of a cinema experience. 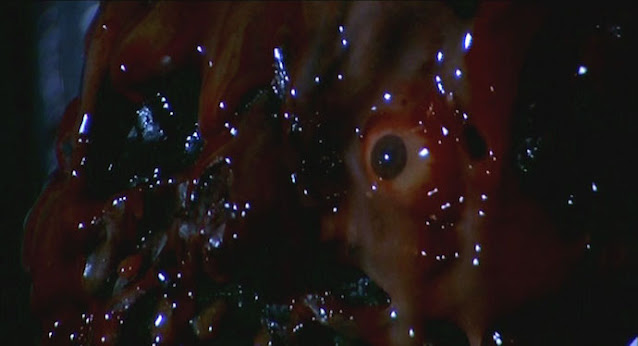 Yeah, the only real reason to see this is for the gooey makeup effects. In fact, I would love to see a remake of this with a better script, more involved direction, and practical effects with a budget that would allow the effects team to go hog wild in their attempts at making the audience vomit all over itself. We are long overdue for a truly visually repellent effects showcase, and what better time for one than during a pandemic? 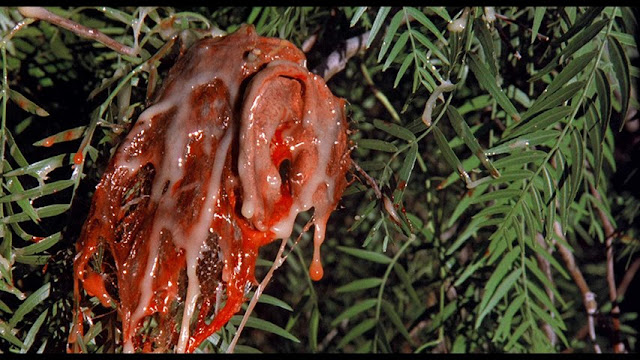 Early attempts at the Fleshlight were a tragic failure.

But with all of that said, the real reason why I included this film in this year's roundup was its utter hilarious disappointment of an ending. After leaving a trail of death and his own bodily components in his wake, the melting man, his mind now long-gone, simply collapses next to a corrugated tin shed on the grounds of a power plant, slowly slides down to the ground, and simply dissolves into what looks like a big puddle of vindaloo diarrhea. Once he has unceremoniously liquefied, the facility's janitor non-chalantly scoops up the goo and deposits it into a nearby trash can. There is then an announcement that another space mission similar to the one that spawned the monster is about to take place, but for all intents and purposes the story really ends with the protagonist being disposed of like the contents of a loaded diaper. After all of the film's (admittedly tepid) mayhem, I was expecting something, anything, more than what they gave us, and though it was a massive fizzled-out fart of a climax, I laughed my ass off. Sometimes an unforgivably bad ending can be hilarious — MONSTER A GO-GO, anyone? — and this one had me howling like a crazed harbor seal. It was the kind of "fuck you" to the audience that reversed itself and became an unexpected gift of sheer piss-yourself hilarity. 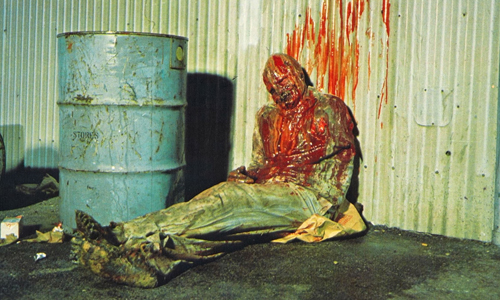 It's a passable way to waste 84 minutes on a rainy afternoon, but that ending is simply glorious. (chef's kiss) 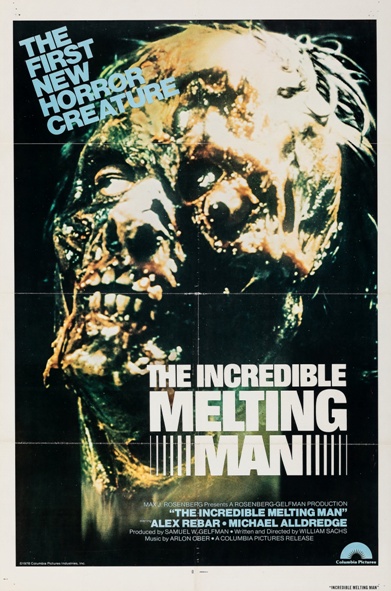