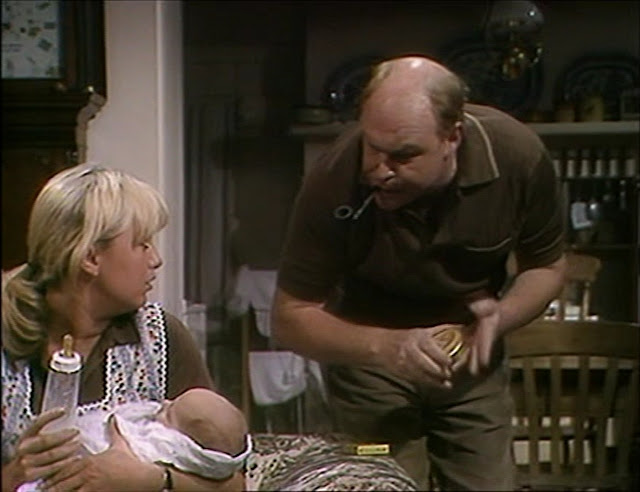 How to deal with a finicky baby.

New mother Mabel Taylor (Susan George) is beside herself with worry. Her six-week-old daughter simply will not eat and is rapidly losing weight, but Albert (Timothey West), Mabel's doting husband, arrives at a solution behind his wife's back. Albert is a beekeeper who shares a "witchy" rapport with his honey-making charges, having adored them since childhood and having never once been stung, despite not using smoke or protective gear as he tends to his dozens of hives, so he begins secretly supplementing the baby's bottle with royal jelly, the hive-produced food that is reserved exclusively for queen larvae. Once fed the stuff, the baby becomes voracious, putting on weight at an alarming rate, so Mabel confronts Albert about the change in their daughter's feeding behavior and weight gain. The pair had tried for a long time to conceive, but only got lucky once Albert began consuming mass quantities of his hives' royal jelly. Albert, who has begun to bizarrely make buzzing sounds as he speaks, notes that royal jelly has made a new man out of him, and that it's just the thing for their "little queen..." 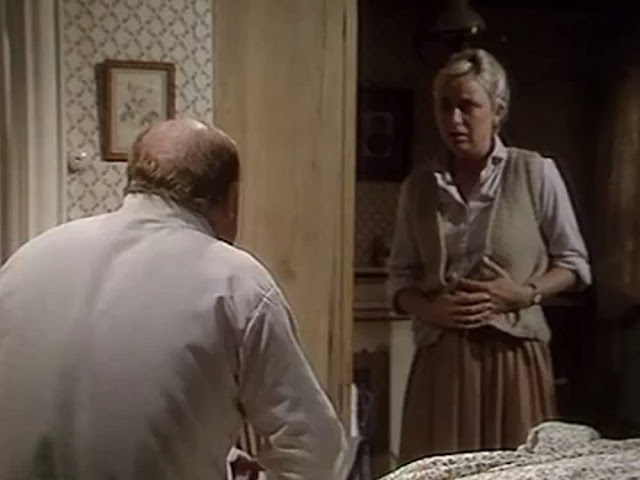 Albert tells his wife of his radical solution to their infant daughter's lack of appetite.

Based on the 1960 short story of the same name by Roald Dahl, "Royal Jelly" predates THE OUTER LIMITS' 1964 episode "Zzzzz" in mining the beehive for quirky horror fodder, and is infinitely more disturbing. As human beings, most of us are predisposed to care for infants, so stories involving dire things happening to them cannot help but resonate. The idea of an otherwise healthy baby girl morphing into a humanoid queen bee larva is a whole new level of body horror, and coming from the mind of the author of WILLY WONKA AND THE CHOCOLATE FACTORY, "Royal Jelly" was heavily infused with Dahl's signature absurd creepiness. This TV adaptation is played absolutely straight, with its ending proving unsettling while inspiring questions of "What the hell happens next? Yes, it's horrifying, but what if the baby survives and flourishes? What would this hybrid of man and Apoidea harbinger? I had the same questions when watching "Zzzzz" as a child, but in that case the hybrid was a swarm of bees that took on the form of an alluring human woman in order to mate with a scientist and create a bridge between the species. I'm a big fan of bees, so I would like to think that such a blending could be wondrous, but when seen from the angles presented here...not so much.

Extra points to Susan George, an actress who can be terrific when given a solid script and good direction. She was great in Sam Peckinpah's shattering STRAW DOGS (1971), but she will forever live in my heart and mind for her unintentionally (?) hilarious portrayal of incestuous alcoholic slave-fucker Cousin Blanche in MANDINGO (1975).