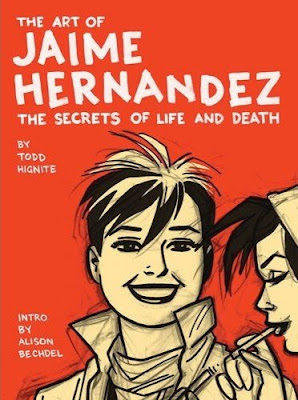 What is there left to say about the unmitigated excellence of comics storyteller Jaime Hernandez that has not already been covered at great length since the 1980's and the advent of LOVE & ROCKETS?

I think I first saw Jaime's art in the form of various spot illustrations he did for THE COMICS JOURNAL during my high school years, and then someone handed me a copy of LOVE & ROCKETS #2, stating that I would probably like the art of both of its creators. I very much enjoyed Gilbert's stuff and to this day think he's probably the stronger writer of the two brothers (which is in no way to say that Jaime's a slouch, because their scripting is of two distinctly different flavors), but it was Jaime's crisp lines that made me stick with the book (to say nothing of his coming from a punk rock-drenched background like I did, only him being from California while I'm from Connecticut), and over the years I watched those two siblings from Oxnard grow into two of the most formidable graphic stylists in the history of the American comics medium. The quarterly wait between issues of LOVE & ROCKETS was a near-physical agony, but one's strained patience was always rewarded with a feast of quality unrivaled at the time.

Next month, continuing a streak of comics-related books that blow me away, Abrams books is issuing a simply stunning coffee table book celebrating Jaime's career and work that made this longtime fan salivate like Pavlov's dog. THE ART OF JAIME HERNANDEZ: THE SECRETS OF LIFE AND DEATH is everything that both the seasoned Jaime-follower and the newcomer alike would possibly want in such a chronicle. Loaded near to bursting with family photos, riveting insights into the artist's sensibilities, reproductions of scores of his classic imagery, and mouth-watering pages shot straight from the original art boards, this book is an absolute must-have that needs no further hype or explanation from the likes of me. Let it suffice to say that even though 2010 is less than three months underway, I already name this as the Vault of Buncheness' pick for BOOK OF THE YEAR. No bullshit, if I were forced to give up all but five books in my rather voluminous collection, THE ART OF JAIME HERNANDEZ: THE SECRETS OF LIFE AND DEATH would absolutely make the cut. Order it. NOW. HIGHEST RECOMMENDATION.
Posted by Bunche (pop culture ronin) at Wednesday, March 10, 2010

Labels: COMIC BOOKS ARE FOR IDIOTS, GEEKIN' OUT, WHAT I DONE BEEN READIN'

Big-time YEAH to this.

When I was teaching sequential graphics at the Art Institute, Love & Rockets was on my "required reading" list. The medium really doesn't get much better than Los Brothers Hernandez!

On a side-note: I recently lent the Empowered series to my friend and collaborator Bryan Syme. He devoured them, bought his own copies, and proclaimed this week during our gaming session that Adam Warren is his new favorite comic artist (and one of his favorite authors, too). Thanks again for the recommendation! I would never have touched that title without your many praises to its worth.