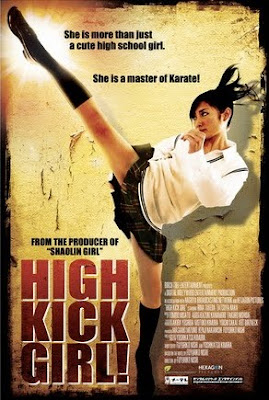 Cover for the American DVD release.

Everyone who loves movies has a particular genre that floats their boat and makes them feel glad to be alive when they see a particularly good example of that genre. For some it's musicals, for others it's westerns or horror offerings, but for me it's all about martial arts flicks (and giant monster junk, but that's not relevant to this post). Once affectionately nicknamed "chopsocky" flicks — a term that has fallen out of favor in the wake of the juggernaut that is political correctness — martial arts films in recent years have relied far too heavily on contrived plot gimmickry, too much wire work and, most unforgivable of all, the curse of CGI, so when I saw the trailer for HIGH KICK GIRL last year I was intrigued but not entirely hopeful. I've been burned too many times to get my hopes up anymore, so HIGH KICK GIRL came from out of nowhere to hold me riveted to the screen with its sheer simplicity and honest execution. No lie, I fucking loved it!

After 2008's gravely disappointing CHOCOLATE, which failed thanks to a dull script and some of the most mechanical fight choreography on record, comes this film featuring a schoolgirl named Kei Tsuchida (Rina Takeda) whose martial skills far outstrip her deeper understanding of the art she's learning. The basic gist of the story is that the girl in question, though only a brown belt, can throw down against karateka of higher rank and smash the living crap out of them in process. Seeking to prove how "strong" she is, the girl "hunts black belts" by going from dojo to dojo and challenging the top fighters, utterly decimating all her opponents. 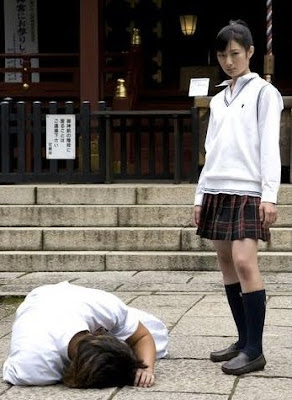 This practice does not sit well with her old school sensei (Tatsuya Naka), who advises her that what she is learning is strictly for self-defense and urges her to change her ways. Ignoring her sensei's guidance, Tsuchida accepts an invitation to join The Destroyers, a group of martial arts badasses from various disciplines, who use their skills as thugs and enforcers for underworld interests. Once she passes their brutal "entrance exam," Tsuchida discovers she's stepped into more than she bargained for when the leader of the gang is revealed to have held a major grudge against her sensei for fifteen years and she is now the bait to lure him to a long-delayed confrontation...

HIGH KICK GIRL's martial arts are stunning and what deficiencies may exist in some of the acting are more than made up for by the electrifying choreography. Takeda is nothing short of amazing in her role, looking like a Japanese Paris Hilton and exuding just the right amount of bullying arrogance when handing out butt-kickings. The film is briskly paced and never boring, and speaking as a longtime martial artist enthusiast, I recommend this to anyone who has daughters with an interest in practicing. Takeda is a hero guaranteed to pique the interest of girls and young women, offering a refreshing alternative to the cynical marketing scam that is the Disney Princesses. She starts off as a smug, bullying jerk and learns some serious attitude-adjusting and humbling lessons by the end of the story, so there's more to this than just endless fight scene after endless fight scene (unlike CHOCOLATE).

The film is also notable for featuring none of the graphic/sadistic gore and violence one might expect from this, and there's also no cursing, nudity or fetishistic fan service that usually goes along with a Japanese flick whose protagonist is seen in a schoolgirl's uniform for most of the running time. If this were given an MPAA rating, I could see this getting by with a PG-13 at worst, and that solely because it contains wall-to-wall fights, but if we lived in the more permissive era before 1995, I bet this would get a PG. In summation, HIGH KICK GIRL is a tougher-than-usual film for kids that solidly entertains from start to finish and maintains a very moral standard throughout. If all the viewer wants is quality ass-kicking, that's certainly to be had here, but the resolution of the character's arc comes as the satisfying icing on a tasty budo cake. And when watching the DVD, don't miss out on the two extra features focusing on Takeda and Naka's skills and their training for the film's fight sequences. There's also a standard "making of" featurette that, like the other extras, is untranslated, but in the case of the features on Takeda and Naka their physical acumen speaks for itself and delights the eye. HIGHLY RECOMMENDED. 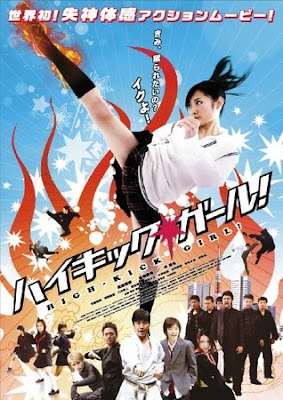 This was a pretty good flick, hopefully Rina Takeda shows up in many more films kicking guys in the head.

Of course! A highly recommended from Bunche, and Netflix doesn't have it. (grumble)

Maybe I can luck out at the quirky video store in the city...