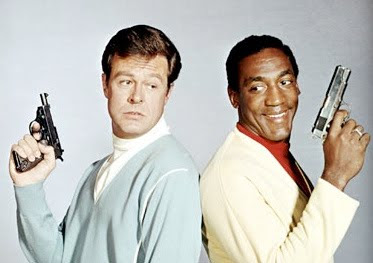 Robert Culp as international tennis pro/secret agent Kelly Robinson on I SPY (1965-1968), seen with his co-star, some random Negro who went on to sell pudding or something before fading into total obscurity.

It's always a kick in the head when one's childhood heroes pass on, adding further evidence to one's own advancing in age...

Robert Culp, co-star with Bill Cosby in the groundbreaking Sixties spy series I SPY (1965-1968), is dead at age 79 after a fall-induced head injury outside his Hollywood home. I liked Culp's work a lot and am sad to see him go, especially after meeting him at the last NY Comicon. He was really cool and quite endearingly snarky when signing the photo he autographed for me (see below) and I was fortunate enough to be standing there as he cursed out some idiot on the phone for fucking up his very simple sandwich order. 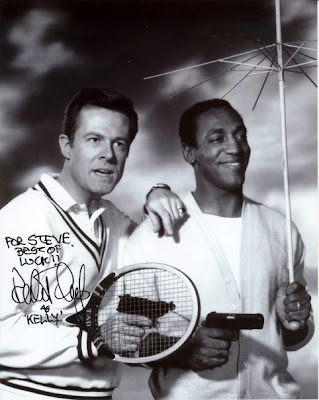 Someday I hope to get Cosby's signature on this shot as well, but I'm happy just to have Culp.
Posted by Bunche (pop culture ronin) at Wednesday, March 24, 2010

He even made the mostly unwatchable "Greatest American Hero" somewhat entertaining. Sad to see him go.

Hey now...the first season of Greatest American Hero was pretty good even aside from Culp.

After that, well...I'll grant you it started to lose steam fast...