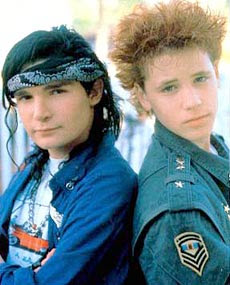 The Two Coreys: Corey Feldman (L) and Corey Haim (R).
One half of "the Two Coreys" of 1980's THE LOST BOYS (1987) fame, namely Corey Haim, was found dead in Burbank at the age of 38 of what is being called an apparent overdose. The official cause of death is undetermined, pending autopsy results. More details as they emerge.
Posted by Bunche (pop culture ronin) at Wednesday, March 10, 2010

Comments heard around the office: "It's only right that they should bury Feldman alive with Haim" "Feldman won't live 2 weeks without his other"