MONSTER FROM A PREHISTORIC PLANET (1967) 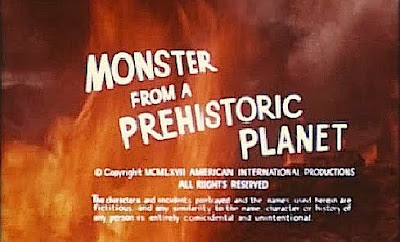 There are times when the edited-for-television version of a film can be an improvement over its original theatrical release, and MONSTER FROM A PREHISTORIC PLANET is a perfect case in point. Also known as GAPPA, THE TRI-PHIBIAN MONSTER, this flick ran perennially as an expected part of the New York City's late, lamented THE 4:30 MOVIE's periodic and very popular "Monster Week" cycles, only with its original running time of 95 minutes was shorn to fit within a ninety-minute time slot with commercials, and while it might seem like much would be lost during the trimming, that necessary editing actually proved to be an act of mercy to viewers who were none the wiser. Unleashed upon an innocent public by the Nikkatsu Corporation, a company now best remember for its softcore Roman porno flicks ("Roman" being shorthand for either "romance" or "romantic") of the 1970's and 1980's, the film appeared during the heyday of the original Japanese giant monster movie boom, this highly derivative time-waster is one dull motherfucker, which defies all logic since it contains three monsters and much of the carnage and mayhem requisite for the genre. The American dubbed version is included on the cheap DVD of the Gamera flick RETURN OF THE GIANT MONSTERS, and watching it for the purposes of this review was the first time I had seen this version of it since the late-1970's; I saw the high-end subbed and letterboxed version that was released domestically some years back, but I was drunk at the time and that edition utterly failed to hold my attention, but I remembered the version I saw several times as a kid as being entertaining enough...

Shamelessly cribbing from three vastly superior giant monster films — specifically KING KONG (1933), MOTHRA and GORGO (both 1961), but most especially from GORGO — the film tells the uninvolving story of a bunch of Japanese who show up on a South Seas island (complete with Japanese actors in head-to-toe shoe polish and adorned in Halloween party "native" garb), ostensibly to bring back animals to populate a theme park, but instead find the egg of an ancient and feared monster called Gappa. The party steals the baby monster in spite of the natives' profuse and vehement warnings, and in no time the bay's enormous and very pissed-off parents make their way to Japan in search of their offspring, causing much death and destruction along the way. The adult Gappa pair can fly and emit a devastating heat ray, so, just like when faced with the rampaging Mothra, mankind's feeble efforts are pretty much useless. 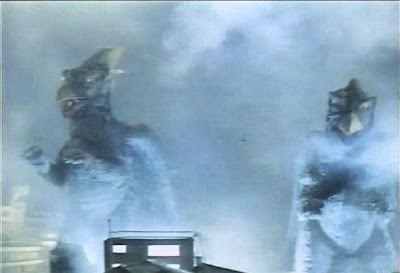 Ma and Pa Gappa do the urban renewal two-step.
By the time that the humans relent and let the baby loose to join its parents on an airport landing strip where they all fly away (also as seen in MOTHRA), I simply did not care. While ripping off three of the best giant monster movies ever made, MONSTER FROM A PREHISTORIC PLANET is dull, dull, dull, and completely lacks even a trace of the fun or magic of any of its inspirations, but the shortened-for-TV version livens up the full-length version's glacial pace by excising long bits of boring and pointless dialogue that only served to unnecessarily pad out the running time. I bet that the 4:30 MOVIE's cut would still hold up as an at least passable bit of filler programming, but that edit was unfortunately not included on the Gamera disc. Whatever the case, I'm glad I saw MONSTER FROM A PREHISTORIC PLANET just so I could speak on it from an informed standpoint. Now that that's done, I most likely won't ever revisit it. In short, miss this one and you miss nothing.
Posted by Bunche (pop culture ronin) at Monday, March 22, 2010

I found an image of an old TV Guide ad for the 4:30 movie and am sending to you on your email...hope you don't mind

Further condense it to 3:14 and it's pretty..well still pretty shitty. Sorry.