TWO MORE FOR THE AUTOGRAPH COLLECTION

My pal Jill the Otter just got back from Gallifrey 1, the gloriously geeky DOCTOR WHO convention in California, and she snagged me autographed photos of two of my favorites among the Doctor's many companions. First is Frazier Hines, who played Jamie McCrimmon, a smart and adaptable Scots Highlander from 1746 and one of the longest-serving companions (1966-1969 and three return appearances in 1984, 1985, and in archival footage in 1984). 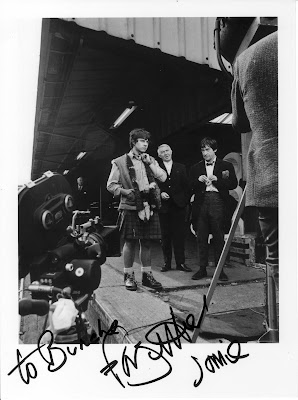 Jamie is hands-down my favorite male to travel in the TARDIS and I keep hoping the makers of the current series will bring him back as his older self, simply because I would love to see him again. 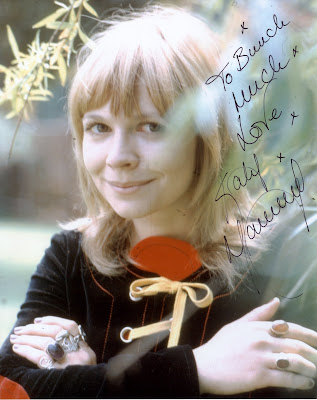 Jo was one of the series' first female characters who was not the standard damsel in distress and she was always right there in the thick of things with John Pertwee's Doctor (my favorite of the entire lot). Long described as fun and kind of kooky, Manning apparently lived up to her reputation when Jill met her, and Jill claims she was both sweet and very funny. When I asked Jill to snag me the autographs from Gallifrey 1, I specifically asked for the now-infamous tasteful-but-completely-absurd shots of a nude (save for boots) Katy Manning draping herself all over a Dalek, provided she had those for sale. 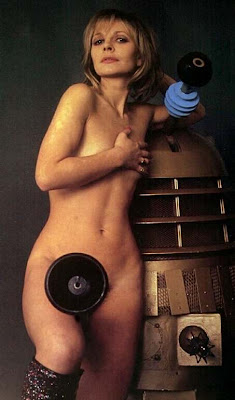 One of Manning's infamous nudie shots with a Dalek.
From the info I've managed to garner, Manning posed for a series of these for a British men's magazine right after she left the show and unfortunately none were to be had at the con, but when Jill asked her about it, the sixty-year-old Manning reportedly smiled a huge grin and said in her charming accent, "Ooh, that one was rather naughty!" My kind of gal!
Posted by Bunche (pop culture ronin) at Tuesday, March 09, 2010

Grant Morrison wrote a strip ages ago for the aul' DOCTOR WHO MAGAZINE which gave Jamie McCrimmon a rather decent and fitting death. Hines is probably old enough now to pull it off, if anybody ever got 'round to adapting it (especially now the WHO production team is heading in a less-Welsh-more-Scottish direction these days).

Apologies if you've seen this as I haven't been reading you long, but I imagine you'll get a kick out of this, especially if you like Jamie - http://www.youtube.com/watch?v=ZahysN2sIIw